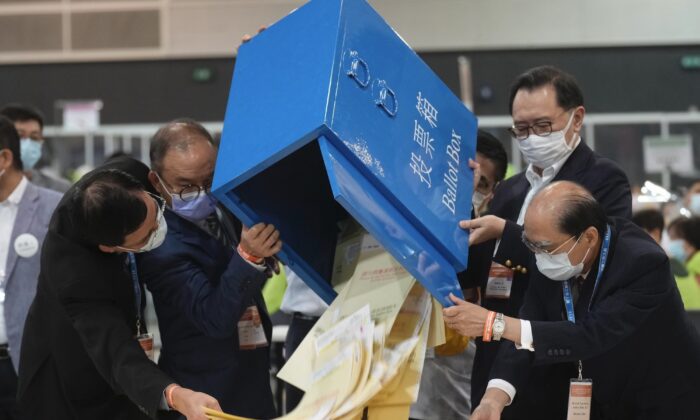 Erick Tsang (2nd from L) Secretary for Constitutional and Mainland Affairs Bureau, helps officials in pouring out ballots from a box at a counting center in Hong Kong on Sept. 19, 2021. (Vincent Yu/AP Photo)
Thinking About China

Hong Kong staged a ridiculous Election Committee farce on Sept. 19. The hope for a direct election of the city’s chief executive is gone. Communist China’s rubber stamp legislature mechanism has been imported in Hong Kong as a “patriots-only” electoral system.

Looking at Hong Kong, the world should know what to expect if the Chinese Communist Party (CCP) dominates the world. The free countries should wake up and learn how to really deal with the CCP.

After Hong Kong’s handover in 1997, the Election Committee began to operate and it is known as a small circle election. The Election Committee was formed to elect Hong Kong’s chief executive. Unlike a general election, the small circle election is held by representatives from various sectors who have ties to Beijing—this system allows the CCP to choose the city’s chief executive.

For years, the Hongkongers have worked hard to get rid of the small circle election and to replace it with a general election that upholds the principles of the Sino-British Joint Declaration and Hong Kong Basic Law.

But the hope for a general election of the executive chief is gone: the CCP implemented the national security law in June 2020, Chief Executive Carrie Lam postponed the Legislative Council elections due in September 2020, along with the recent Beijing-led electoral revamp.

During the election, the CCP was on high alert and authorities deployed 5,000 to 6,000 police throughout Hong Kong. “[The police] are wasting their time,” a local resident told Kyodo News. “Hong Kong citizens are becoming more indifferent to politics.” He did not even know that the election was taking place, the article said.

The Election Committee has now increased to 1,500 people. The election on Sept. 19 was to decide 364 seats from 412 candidates by a total of 4,889 eligible voters, rather than the 7.5 million plus Hong Kong citizens.

At a press conference held after the election, Chief Executive Carrie Lam called it significant, considering that “those who were anti-China and aimed to undermine the security of Hong Kong had made their way into the electoral system.”

Lam’s statement confirmed that the pro-democracy camp don’t have a place in the Legislative Council and the general election.” The “one country, two systems” has officially come to an end.

The CCP’s rubber stamp legislature is officially copied in Hong Kong. Now, Hong Kong law is at the CCP’s service, and Hong Kong is ready to become a municipality under the jurisdiction of China. The so-called Liaison Office in Hong Kong can be renamed as “Hong Kong municipal Party committee office.”

The Hong Kong Liaison Office touted the success of the Election Committee election on Sept. 20, which shows that pro-Beijing “patriots” are now ruling Hong Kong.

This in fact shows that the CCP fears being outnumbered. Of the 1,500 members of the Election Committee, only 24.27 percent of the seats (364/1,500) can be challenged, with a limited number of candidates of only 412. Beijing has not forgotten the humiliation during the 2019 election.

The district council election in November 2019 had pro-democracy candidates winning 388 seats and pro-establishment parties took only 59—the outcome reflected the Hongkongers’ strong desire for democracy.

The End Game for the CCP ‘Patriots’

In this election farce, the CCP should have mobilized all possible pro-China forces in Hong Kong. However, these so-called patriots in politics, business, or underground Party members should be aware of the fact that they will soon meet their demise.

These beneficiaries of the CCP have helped to grind down Hong Kong for more than 20 years. It is time for them to worry about their assets and personal security.

Hong Kong is quickly losing its legal system and soon it will no longer protect personal freedom and property.

Under the CCP’s call for “common prosperity,” Hong Kong is undoubtedly the next target of the CCP. It is said that Hong Kong’s real estate tycoons have been summoned to Beijing for a lesson.

The real estate prices in Hong Kong have skyrocketed for the past 20 years due to a large number of high-level CCP officials investing their assets in the city. Their relatives have also obtained residency in Hong Kong. Beijing has also funded various institutions in the city—corrupt funds were laundered through Hong Kong and returned to China as foreign investment. How can the current leader tolerate massive capitals hiding in Hong Kong?

The recent fall of the Hong Kong stock market is a sign and investors should have been aware of the repercussions of the recent election. Now it may be too late to run. Those tycoons who once voiced their support for the CCP didn’t expect that they could be ruined.