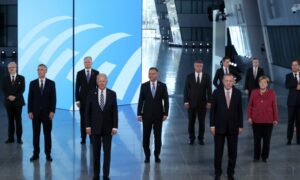 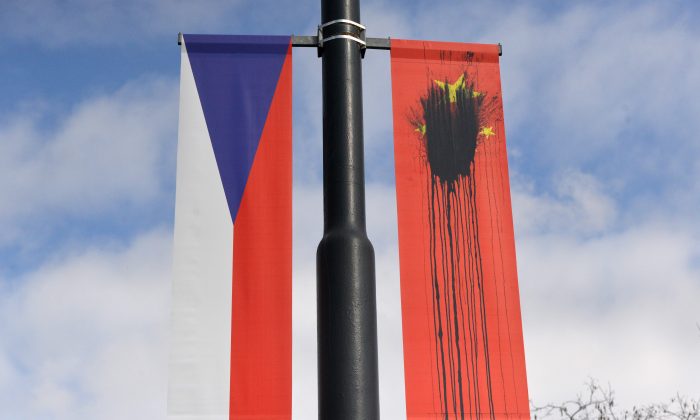 A Czech National flag hangs next to a Chinese National flag splattered with a black substance in Prague on March 26, 2016. (MICHAL CIZEK/AFP/Getty Images)
Europe

In anticipation of a three-day state visit by Chinese leader and Communist Party head Xi Jinping, banners displaying the red, five-star flag of the People’s Republic were erected in Prague at various points along the streets he is expected to travel on when he arrives on March 28.

But in the night of Friday, March 25-26, multiple banners, which are displayed in tandem with national flags of the Czech Republic, were vandalized with paintballs, causing distinct dark-blue blotches across the Chinese banners, the Prague Post reported.

The defaced banners are located on Chotková and Evropská streets, as well as other areas around Prague Castle. They were not taken down immediately because of the ongoing police investigation. A man in his thirties was arrested on suspicion of having carried out the vandalism.

In various Twitter posts, a spokesman for Czech President Miloš Zeman condemned the acts as reminiscent of right-wing fascism that had brought the nation, then known as Czechoslovakia, under Nazi occupation in 1939.

But opposition politician and district mayor of Prague 6, Ondřej Kolář, has taken a critical view of giving the communist Chinese flags a presence in the Czech capital at all.

From 1945 to 1989, the Czech Republic and its neighbor, Slovakia, were part of the Czechoslovak Socialist Republic, a satellite state that suffered military invasion and political repression under the thumb of the Soviet Union. Banners glorifying communism and the Soviet Union were required in many public spaces, Kolář, who is a member of the conservative TOP 09 political party said.

Though Kolář is opposed to the Chinese flags, he said that neither he nor his party could condone illegal acts and the damage of state symbols.

On the agenda for the meeting between Xi Jinping and Czech leaders is the possibility of establishing a strategic economic partnership between the two countries, opening up the Czech Republic to an influx of Chinese investment.

The Prague Post reported that several protests were planned in light of Xi’s visit. One non-governmental organization has placed a billboard in Prague prominently showing former Czech leader Václav Havel meeting with the exiled Tibetan leader, the Dalai Lama.