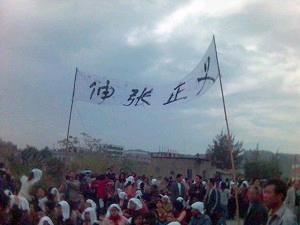 On May 24, the Guangdong Haifeng Court held a hearing on the Shanwei massacre that happened on December 6, 2005. Thirteen villagers were given heavy sentences of three to seven years in jail for crimes of “detonation, gathering the public to disturb the social order and disrupting traffic.” Their family members will appeal.

In addition, six defendants received suspended sentences for four years. Village representative Huang Xijun received was sentenced to five years in prison; Lin Hanru got six years; Huang Xirang got seven years. The hearing lasted for three days, and only two members per family were allowed to listen-in to the session. Other villagers were not permitted to enter the courtroom.

According to villagers, Huang Xirang, who received the heaviest sentence, is in bad health; he has a broken wrist and lost his eyesight and hearing. Huang Xirang's wife is not in good health either. She faints frequently and often needs hospital treatment. She was unable to attend the court hearing and was represented by Huang's uncle. Huang's son's leg injuries have not healed yet. Villagers said that Huang's wife is very upset because her whole family is in a tough situation now.

On December 6, 2005, the government of Shanwei City, Guangdong Province mobilized nearly a thousand armed policemen and anti-riot policemen. They opened fire on the Dongzhou villagers who were protesting for their rights and protecting their land. Many villagers were injured; some are missing, and some are dead. In addition, the authorities arrested hundreds of villagers.

The following is a quote from the court verdict:

“The court tried and found that, on December 6, last year, in order to stop the construction of a power station at the Honghai Bay development zone in Shanwei City, the defendants incited over a hundred villagers to throw explosives and napalm at the police on duty and to attack public security police on duty. Civilian police had to use tear gas and fire shots into the air to disperse the rioting crowd. Later on, the Shanwei government confirmed that three vilagers were killed and pointed out that a few trouble makers in Dongzhou village had incited villagers to make unreasonable requests for compensation of land expropriation, and therefore hindered construction.”

Mr. Li Jian, of the Civil Rights Defense Network, and some human rights advocates have carried out an independent investigation on the site where the event occurred and have concluded that the incident at Dongzhou was a bloody massacre of villagers. They are now pushing for a fair resolution within a legal framework. [Editor's note: Dongzhou, where the massacre happened, is under the authority of the Shanwei government.]

In their “Investigation Report,” Li pointed out: “The police do not have any legal ground to stand on to open fire to shoot and kill the villagers, nor do they have excuses such as so-called counterattack in self-defense while protecting the power plant, etc. It is obviously a misuse of violence. The Dongzhou massacre was entirely a planned and organized murder by the local government and was aimed at Dongzhou's human rights activists. The purpose was to suppress and terminate human rights activities in Dongzhou and neighboring villages [where people] seek to protect [their] legal property rights, for example by protesting local officials' illegal profiteering in land acquisition.”

Li also pointed out: “When the bloody event occurred, the local police and the villagers kept at a distance from each other. That is sufficient prove that the police could not have been attacked. The bloody incident did not happen by accident. It happened because the police initiated the attack, and the villagers were desperately defending themselves.”

In the past several months, the government neither showed any concern for the Dongzhou villagers, nor tried to resolve the conflict. More than ten families have lost family members. Because of the loss of income, women have had to take their young kids and go begging in the street. The government sent no money for the children's schooling or for health care. Instead, the government has warned families not to beg on the streets. Government notices have been issued to every family stating that villagers who beg on the street are “disturbing the social order.”

Villagers say they feel they are being trampled upon by authorities and are forced to silently endure arrests, beatings, detentions, and house searches. The authorities continue to tap into their telephone conversations and even cut off their phone calls. They use forceful means to monitor villagers' communication with the outside world. A reporter who called a villager for an interview was told: “I am sorry. I do not dare say anything. I am scared to death.”