The Dead End of Communism

Communism Killed 100 Million People in the 20th Century: Don’t Flip Off a Memorial for Its Victims 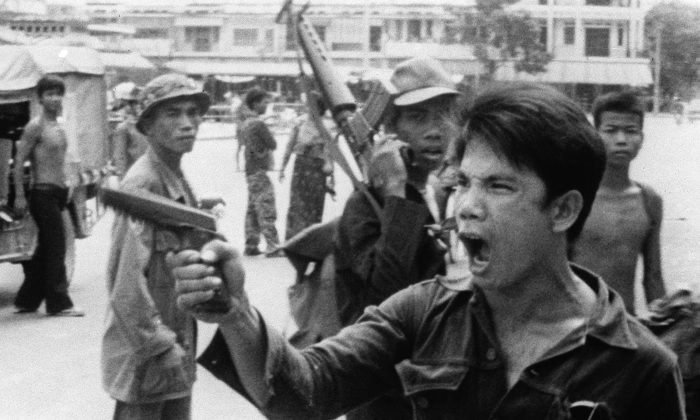 A Khmer Rouge soldier waves his pistol and orders store owners to abandon their shops in Phnom Penh, Cambodia, on April 17, 1975 as the capital fell to the communist forces. (AP Photo/Christoph Froehder)

The horrors of communism has filled up endless books. At least 100 million people died under self-described communist regimes. Mao Zedong, Joseph Stalin, Pol Pot, and Kim Il Sung are among the chief killers.

If one went to the United States Holocaust Memorial Museum in New York City and flipped off one of its memorials, one would resoundingly—and correctly—be called a Nazi, a fascist, or just a jerk.

But evidently, flipping off the Victims of Communism Memorial in Washington D.C. gets you praise on Twitter. This week, that very thing happened: some people were photographed flipping the middle bird at the memorial—to cheers on social media.

But hat a world we live in when victims of the most destructive ideology in human history—around the world—are mocked. Nobel Peace Prize-winning author Aleksandr Solzhenitsyn, who penned the masterpiece “Gulag Archipelago” put it best: “For us in Russia, communism is a dead dog, while, for many people in the West, it is still a living lion.”

Solzhenitsyn himself spent years in and out of Gulags, and has since spent his life helping raise awareness of its brutality. The numbers are fuzzy, but are in the millions, regarding how many people are estimated to have been killed in Gulags.

Women in Gulag camps were not spared. Many were tortured and raped.

This isn’t about liberal or conservative politics. Under communist systems, freedom of speech, religion, and self-expression are criminalized. Under these systems, people were thrown into Soviet Gulags, Chinese laogai, or were simply buried alive—like in Cambodia’s Killing Fields, where entire families were marched to a secluded area and were ordered to dig their own graves. They weren’t shot, but were stabbed, poisoned, or beaten to death. Bullets weren’t to be wasted, on the orders from Pol Pot himself.

Whether you’re on the left or right, under communist systems, anyone can be an enemy. Just ask the generations of North Korean prisoners who were jailed for decades for minor crimes, being labeled as an “enemy of the Great Leader.” To this day, they still suffer in labor camps.

When you flip off a “victims of communism” memorial, you’re flipping off Tibetan monks, Falun Gong practitioners, and human rights activists who are currently being tortured, starved, and beaten by Chinese Communist Party officials. You’re flipping off the North Korean children prisoners who were born—and will probably die—in the brutal camp 22 labor camp.

If you think that Adolf Hitler killed the most people in human history, you’d be wrong. Mao and Stalin far outpaced the Nazi dictator, killing tens of millions more. Mao is estimated to have killed as many as 70 million; Stalin about 40 million; Pol Pot of Cambodia—in just four years in the late 1970s—left 1.7 million to 3 million dead, in a country of only 8 million people. When communism reached East Africa, particularly in Ethiopia during the 15-year-rule of heartless dictator Mengitsu, 1.5 million died.

This isn’t a joke.

Starting from this year, The Epoch Times has been producing a series of articles called The Dead End of Communism, in an attempt to highlight and raise awareness about its crimes.

A secret genocide is being carried out by the Chinese Communist Party as you read this article. When it’s fully revealed to the world, don’t be on the wrong side of history.