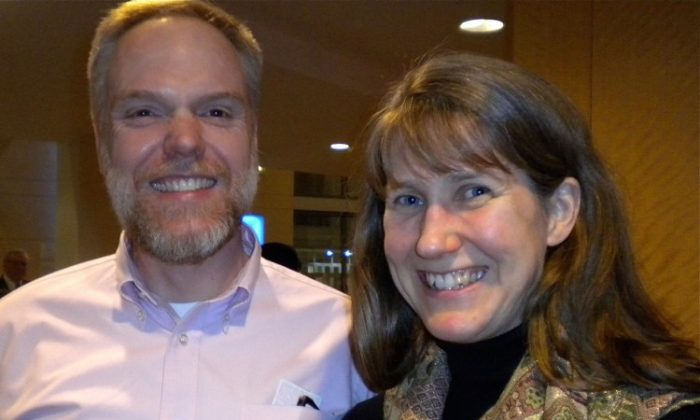 MEMPHIS, Tenn.—Shen Yun Performing Arts Touring Company won a standing ovation from the audience at Cannon Performing Arts Center, on March 6, and a thoughtful response from a couple visiting from the Northeast.

Kevin Robinson is director of communications for Southwestern Vermont Medical Center (SVHC.) in Bennington, Vermont. He and his wife, Elizabeth, each said they enjoyed the unique orchestra.

“I thought it was wonderful, beautiful,” said Mr. Robinson. He said he wondered whether the score was original. When he learned that the music was composed for the show, he said, “I thought they did a wonderful job, kind of mixing traditional Chinese music with something that’s maybe more accessible to a Western audience.”

According to the Shen Yun website, “Is it possible for the disparate sounds of East and West to find harmony? Many have tried and failed. But the ability to seamlessly blend these two systems to create one fresh, harmonious sound is what makes the Shen Yun Performing Arts Orchestra unique.”

The orchestra incorporates traditional Chinese instruments such as the pipa, the suona, the dizi, the gong, the chime bowl and the erhu into a full Western classical orchestra.

Mrs. Robinson, a homemaker and gardener, said the orchestra was a “wonderful mix and maybe a good introduction” to Chinese music.