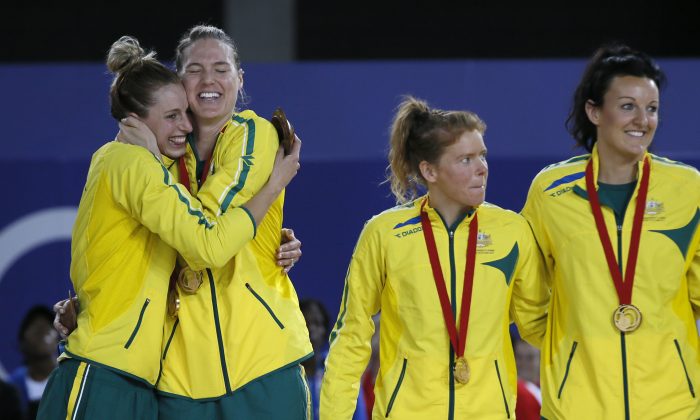 Laura Geitz, left and Caitlin Bassett, of Australia hug after they received their gold medals as they stand on the podium during the medal ceremony, after they defeated New Zealand in the gold medal match in the women's Netball at the Commonwealth Games Glasgow 2014, in Glasgow, Scotland, Sunday, Aug., 3, 2014. (AP Photo/Alastair Grant)
Sports

Broadcasters around the world will air coverage of the 2014 Commonwealth Games Closing Ceremony on Sunday, May 3.

More than 1 billion people are projected to tune in to the ceremony, which will end the games and reflect the upcoming transfer to Australia for the 2018 Games.

The event is being held at Hampden Park in Glasgos, Scotland.

Check out a full list of broadcasters and live stream providers below.

To find your country quickly, search on the page for the country name.

GLASGOW, Scotland—The Commonwealth Games ended Sunday with England winning the overall gold medal race and the country it usurped—Australia—hoping for better things in four years when it will host the multi-sports event that attracts athletes from countries aligned with the former British Empire.

The first gold Sunday went to cyclist Lizzie Armistead in the road race, and the English added another in badminton later in the day to increase its total to 58, nine clear of second-place Australia.

It marked the first time since 1990 that Australia, which won four events on the last day, hadn’t led the gold race at the Commonwealth Games. Athletes from Down Under will have a chance to return to first place when the Gold Coast in Queensland state hosts the games in 2018.

The closing ceremony was scheduled for Sunday night in Glasgow, with Australian pop singer Kylie Minogue among the headline acts. Head of ceremonies David Zolkwer promised a party atmosphere: “The show is called ‘All Back To Ours.’ The title reflects a personal, spontaneous ‘we don’t want this moment to end’ feeling.”

Armitstead, who finished second in the London Olympics road race and at the 2010Commonwealth Games in New Delhi, led an England one-two finish in the 98-kilometer (61-mile) race on the wet streets of Glasgow.

“Now I can call myself a champ, not a runner-up,” Armitstead said. “It was special, something I’ve always dreamed about.”

She finished the seven-lap course in 2 hours, 38 minutes, 43 seconds. Her teammate Emma Pooley, the silver medalist in the time trial on Thursday and who said she plans to retire from cycling, was 25 seconds behind.

Ashleigh Pasio of South Africa took the bronze in a photo finish with Australia’s Tiffany Cromwell. Both finished 1:11 behind Armitstead.

Linda Villumsen of New Zealand, the gold medalist in the time trial, was fifth.

“It was a great course,” Armitstead said. “I won the national championships here last year, so I was prepared. I definitely had an advantage knowing the track.”

And the rain, which hit the course on several occasions to make conditions slippery for the riders, helped Armitstead.

“As soon as it started to rain, I knew that was an advantage, because when you’re solo you can keep going fast in the wet,” she said.

In the 12-lap, 168-kilometer (104-mile) men’s race held through mostly steady rain, Geraint Thomas of Wales, who won bronze in the time trial here and was 22nd in this year’s Tour de France, overcame a punctured tire with just under seven kilometers (4.3 miles) remaining to win gold.

Thomas, who led by about 50 seconds when his tire needed to be replaced by his crew, finished in 4 hours, 13 minutes, 5 seconds. Jack Bauer of New Zealand and Scott Thwaites of England had a sprint finish for second, with Bauer edging ahead on the line for silver. Both Bauer and Thwaites were 1:21 behind Thomas.

“It was such a grim day, I felt terrible at the start,” Thomas said. “And when I had that puncture, I thought, ‘what do I have to do’? But I had a decent enough gap to stay out in front.”

Elsewhere on the final day:

AUSTRALIA STREAK: Australia beat India 4-0 to win its fifth consecutive men’s field hockey gold. England beat New Zealand 4-2 in a penalty shootout to take the bronze medal after the teams were level 3-3 after regulation time ended. Australia has won 29 of its 30 matches at the Commonwealth Games, only losing a pool match against South Africa 3-2 in 1998.