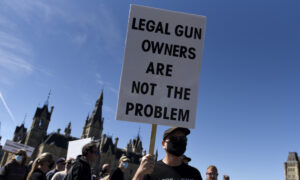 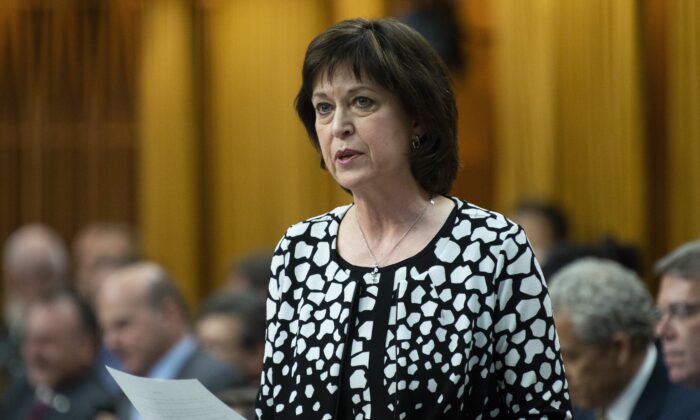 Liberal MP Pam Damoff responds to a question during Question Period in the House of Commons in Ottawa, Canada, on May 9, 2019. (Adrian Wyld/The Canadian Press)
Canada

A parliamentary committee has censured a firearms group over “dangerous” comments made by its president, an accusation he rejects, about the federal government’s recent gun control legislation.

The Standing Committee on Public Safety and National Security voted on Feb. 22 to condemn comments made by Sheldon Clare, president of the National Firearms Association (NFA), on Bill C-21, the new firearm legislation tabled by the Liberal government on Feb. 16, during a video podcast hosted by the NFA last week.

The motion, initiated by Liberal MP Pam Damoff, was endorsed by all parties except the Conservatives, whose committee members abstained from voting.

During the committee meeting, Damoff cited the video podcast in which Clare recounted a conversation with someone who suggested Canadians should “construct guillotines” in response to such government “tyranny.”

“I had a call from a person today who suggested that we needed to revisit our old woodworking and metalworking skills and construct guillotines again. And that would really be the best kind of committee of public safety, to get that re-established. If they want to make it about public safety, that was the way. … The sound of this person’s voice is not one that is joking. He was not joking,” Clare said during the video podcast.

“I don’t think they understand that this is not New Zealand, this is not the United Kingdom, this is not Australia. This is a country made up of people who have been here for thousands of years and are aboriginal people. Immigrants from Europe who fled tyranny, who fought against tyranny, and have no truck with tyranny and they know tyranny when they see it and this my friends, is tyranny,” he said, referring to the bill.

Damoff told the committee that “this kind of language is dangerous. Sharing these comments on their platform … can lead to violence.”

“As we saw in the United States, the storming of the U.S. Capitol by an armed mob was spurred on by similar language. These calls for violence against those who want a safer community are not tolerable, and it is incumbent on all of us to condemn them,” she said.

“I think we need to take a stand. We need to shut down this kind of language, this way of talking and thinking that’s ok to talk about building guillotines and laughing about those kinds of comments in a public forum,” she added.

Clare retorted the views that his comments were advocating violence.

“I’ve merely related comments from upset people who have a real big problem with tyranny. And I think that the virtue-signaling woke liberal left has a problem with being called out as being tyrants,” he told the Global News on Feb. 19.

The NFA president also released a statement in response to the committee motion on Feb. 22.

“I make no apology for any comments made during our NFA Talk podcast—like them or not—we have the right to free speech, at least for now,” Clare said. “Nothing said advocated violence against anyone.”

“The firearms license, registration, and classification system are all failed Liberal gun control and warrant challenging. The May 1, 2020 Order in Council and Bill C-21 proposing a sweeping theft of people’s lawfully obtained property is also unacceptable,” he added.

“The NFA maintains that our strong Canadian firearms heritage and culture matters, and we shall continue to defend it with vigour.”

Conservative MP Shannon Stubbs said her party takes threats against politicians “extremely seriously,” citing examples of threats she and her staff have received in the past.

But she suggested that if Clare’s comments constitute a threat, they should be investigated by the appropriate authorities and discussed only behind closed doors by committee members. She also suggested Clare’s comments may have been taken out of context.

Liberal committee chair John McKay told Stubbs that the authorities have in fact been informed about Clare’s comments.