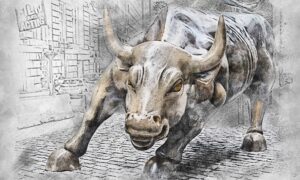 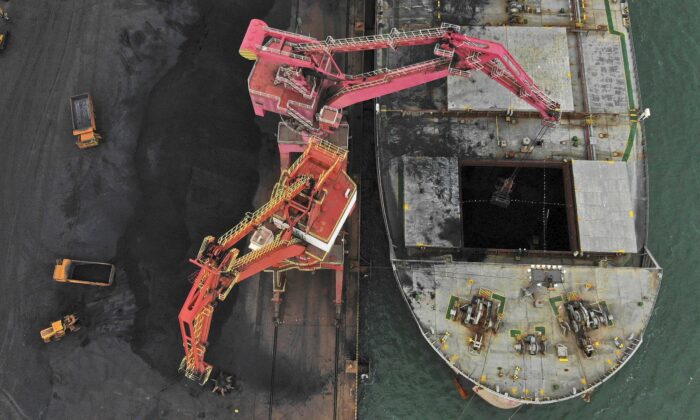 Machines load imported coal from a cargo vessel docked at a port in Rizhao in east China's Shandong Province on Nov. 21, 2019. (Wang Kai/Xinhua via AP)
Viewpoints

The Bloomberg Commodity Index bounced more than 2 percent in the first week of January. At the close of Jan. 10, most commodities are rising well above global GDP growth estimates.

China restocking, inventory build-up, and economic recovery added to a cold winter have driven iron ore and energy commodities much higher, even after a strong bounce in the second half of 2020.

Oil has soared 7 percent year-to-date driven by OPEC cut commitments and rising heating demand, and natural gas has risen between 6 and 8 percent in most regions because of the cold spell affecting many developed countries. Iron ore is up more than 6 percent, copper higher than 4 percent, and aluminum rising 2 percent alongside soybeans, corn, sugar, and cotton.

On the other hand, global GDP growth estimates are unchanged in the past two weeks, despite the vaccine rollout and positive news about trade deals and the Brexit agreement, while estimates for the eurozone and Canada have been trimmed significantly.

Central banks remain oblivious to the risk of stagflation, but it’s important, because a significant part of the commodity rise, priced in U.S. dollars, comes from the impact of the massive increase in central banks’ balance sheets. There’s a problem when monetary policy is entirely obsessed with creating inflation, and when banks have ignored the massive inflation in asset classes, commodities being an important asset class that feeds through to the real economy.

Take the eurozone official inflation figures for December 2020. The estimated number for December came in at minus 0.3 percent due to a 6.9 percent decline in the energy component. However, fresh food prices rose more than 2 percent, and insurance and rent, as well as basic utilities, haven’t fallen at all. Furthermore, no eurozone citizen has seen his or her energy bill come down 6.9 percent.

As Marshall Reindorf of the International Monetary Fund explains, “Underestimating the weight of food and overweighting transport are the main causes of incorrectly estimating inflation.” Jochen Moebert estimates that the cost of housing is underestimated by making national averages that disguise the increase in the most populated cities. Alberto Cavallo, on the other hand, estimates that real inflation in the COVID-19 era is up to three times higher than the official one, especially for the most disadvantaged people, something that Bloomberg Economics also reflects.

In The Wall Street Journal, James Mackintosh showed that inflation shoots up in the goods that we actually buy, and the official consumer-price index (CPI) disguises that rise with obsolete weights, putting in the same basket things that we buy every day, those that we can’t do without, with leisure, technology, and things that are sporadic purchases.

This recent rise in commodities may be perceived as temporary, but the concern about the rising cost of living while economic growth estimates remained weak was already evident in the protests against the increase in living expenses in 2018-2019 in many cities in Europe but also Latin America.

Central bankers are ignoring both the risks of massive inflation in asset prices as well as the red signals in essential goods and services.

What’s the problem of stagflation? Prices rise but economic growth is stagnant, which means that the cost of living for most citizens worsens dramatically. The central bank may continue with its misguided and wrongly called “expansionary policy” because growth is poor, but the situation of millions of citizens rapidly deteriorates. In that scenario, governments resort to hiking taxes, which puts another burden on growth and jobs.

The only way to avoid stagflation is to curb massive inflationary policies before they create a larger mess. It may cause a short-term bump in sovereign yields, but the demand from fixed-income investors should be ample enough to avoid a debt crisis. After all, if central banks and mainstream economists believe there’s such a savings glut and such a massive search for yield, a slowdown in asset purchases should have no consequence.

What can really cause a debt crisis is to ignore the risks and continue expanding the central banks’ balance sheets as if nothing is happening.