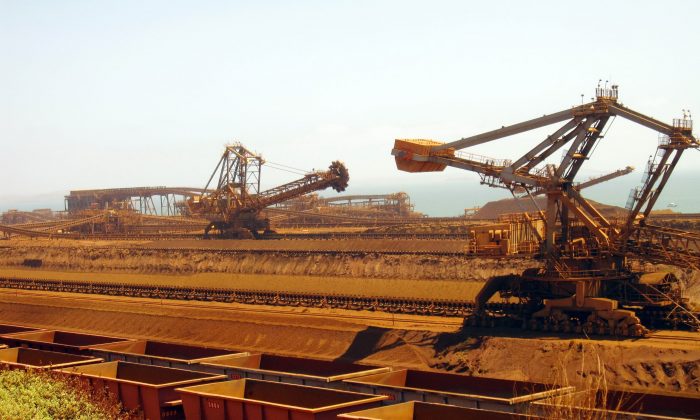 As China’s top economic officials announced a slower economic growth forecast, the commodities markets are bracing for another rout in 2015.

It’s a harrowing thought for commodity producers. Since the early 2000s, China’s investment in factories, infrastructure, and real estate has largely driven the commodities boom over the last decade.

Iron, copper, and aluminum are considered early-cycle commodities as they are input materials for construction and infrastructure development.

Crude oil imports for February were up 1 percent from January, likely as part of the Chinese Ministry of Finance’s strategy of increasing its oil stockpile to 90 days’ worth of supply, while the cost is still relatively depressed, according to a Wall Street Journal report.

China last year accounted for more than half of the world’s consumption of iron ore.

Commodities are being hit from two fronts—China’s slowing growth is hurting producers and exporters in Australia and Brazil, while a strong U.S. dollar (the currency in which prices are quoted) is also contributing downward price pressure.

Iron ore and other minerals are Australia’s biggest export, and China is its largest customer. Last week, the Reserve Bank of Australia, its central bank, kept interest rates flat at 2.25 percent while leaving the door open for future cuts. It’s possible that Australia is waiting for China’s own economic stimulus measures to kick in and drive up demand for metals.

Unsurprisingly, Australian mining shares suffered the most last Friday, with Rio Tinto down 1.2 percent and BHP Billiton down 1.6 percent in Sydney. Rio and BHP are dual-listed in London and Sydney. Both companies had recently expanded their mining operations in Pilbara, northwest Australia, moves originally intended to satiate China’s thirst for iron ore.

The S&P/ASX 200 index fell drastically intraday on March 6, before the selloff tapered and the index ended marginally down. London’s FTSE 100, which is heavily weighted toward mining companies, also fell 0.7 percent.