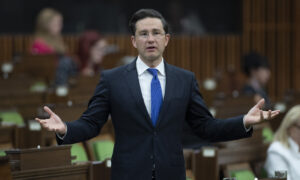 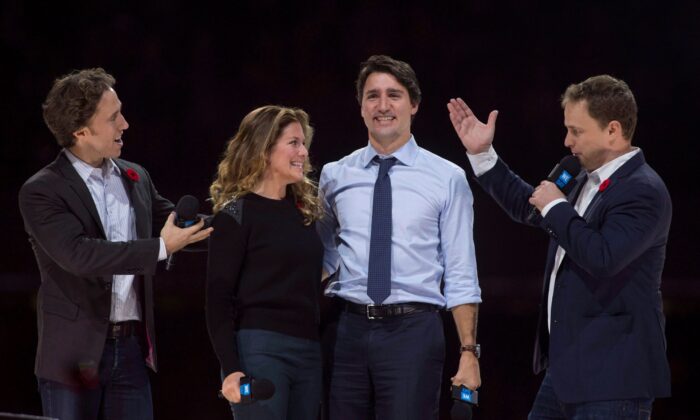 WE Charity co-founders Craig (L) and Marc Kielburger introduce Prime Minister Justin Trudeau and his wife Sophie Gregoire Trudeau as they appear at WE Day celebrations in Ottawa on Nov. 10, 2015. (The Canadian Press/Adrian Wyld)
Canada

Recommendations in a Commons committee report on the WE Charity scandal to safeguard against secret lobbying and conflicts of interest in government spending fall short, says the co-founder of a government accountability watchdog group.

“Essentially, even if the recommendations of the committee were put in place, secret lobbying would still be legal,” Democracy Watch co-founder Duff Conacher told The Epoch Times.

“It’s not a bad report. It’s just not strong enough to actually stop this stuff from happening again. You need to address secret lobbying.”

The WE Charity scandal erupted in June 2020 over the Liberal government’s deal to pay the organization up to $43.5 million to administer the now-defunct $912 million Canada Student Service Grant (CSSG) program, designed to cover up to $5,000 in education costs for students who volunteered during the COVID-19 pandemic.

The announcement ignited controversy because of the close ties between WE founders Craig and Marc Kielburger, Prime Minister Justin Trudeau, then-finance minister Bill Morneau, and family members of both Trudeau and Morneau.

After its review of the affair, the Commons Ethics Committee published a report on June 10 with recommendations on how the federal government should make decisions on contracts to avoid inappropriate lobbying and conflicts of interest.

One of the committee’s recommendations suggested removing a “significant part of duties” registration threshold, also known as the 20 percent rule, from in-house lobbyists.

The 20 percent rule means that if “you’re working for an organization and you are lobbying less than 20 percent of your time, then you don’t have to disclose your lobbying,” Conacher explains.

While it’s good that the committee wants the rule removed, the door remains open to “lobby in secret if you’re not paid for your lobbying,” he said.

The committee said it was “deeply concerning” that Craig Kielburger was able to directly lobby former finance minister Bill Morneau due to their friendship, which staff “within his ministerial office” knew about.

Morneau, whose daughter worked for WE and who had made generous donations to the charity, also came under fire over the CSSG deal. He and Trudeau apologized for not recusing themselves from the decision-making to award the grant.

In May, Ethics Commissioner Mario Dion cleared Trudeau of breaches to the Conflicts of Interest Act. But in a separate report, he ruled that Morneau had contravened the act by giving preferential treatment to WE Charity based on his friendship with Craig Kielburger.

Kate Bahen, managing director of Charity Intelligence Canada, said the ethics committee “did the best job they can” on the report, adding that she was shocked by the federal government’s lack of due diligence before doling out the grant money.

“If anybody had taken 20 minutes to read WE Charity’s audited financial statements, that would have raised a lot of questions,” Bahen said in an interview.

“It was written by the auditor in black and white. It was written that there was a breach of bank covenants in 2018 and 2019. Never seen that before. So here’s a charity that has so much debt it’s now in default to the banks.”

The committee said it was “deeply troubling” that the Liberal government signed the contract not with WE Charity itself but with “WE Charity Foundation,” a shell company with no assets.

“So all the money was going to go into a shell. How does that make you feel as a taxpayer?” Bahen said.

The committee called on the government to refrain from awarding further contracts to the WE group until “an independent audit or a Canada Revenue Agency forensic audit can be undertaken to determine exactly how the finances flow between their charitable operations and their multitude of side companies and real estate holdings.”

One of the committee’s recommendations was to put in place a “conflict of interest screen” that allows staff to remove ministers from being involved in decisions where they could have a conflict of interest. But Conacher says this won’t achieve anything.

Another major loophole, Conacher noted, is the Conflict of Interest Act itself.

“It actually should be called the ‘Almost Impossible to be in a Conflict of Interest Act,’” he said, because it allows ministers to participate in decisions even when they have a clear conflict of interest, as long as the decision applies generally.

“Ninety-nine percent of the decisions that ministers make can apply generally,” he said.

In their own dissenting report, Liberal committee members agreed with the need to review both the Lobbying Act and the Conflict of Interest Act, but accused the opposition of a veritable witch hunt that led to WE and others being targeted for harassment and threats online and elsewhere.