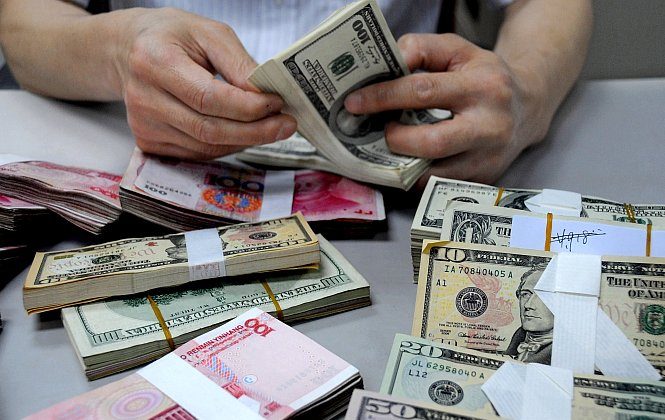 A staff member counts money at a branch of the Bank of China in Lianyungang, Jiangsu Province, China, in this file photo. Because of the currency wars going on between countries like the United States and China, there is a lot of pressure to get away from the dollar as the world's reserve currency, but the Chinese yuan is very far from becoming the world’s new reserve currency. (ChinaFotoPress/Getty Images)
Business & Economy

NEW YORK—Have you ever wondered how the value of the dollar affects us? At a recent gathering of the Committee for Monetary Research and Education (CMRE), prominent speakers provided insight into threats and possible solutions.

“We are in one of those periods now that is driven by excessive debt,” said guest speaker James Rickards, author of the bestselling book “Currency Wars: The Making of the Next Global Crisis.”

The CMRE, which promoted the gathering and invited all the guest speakers, is a nonprofit organization based in North Carolina that seeks to foster greater public understanding of monetary processes.

Another speaker cautious about government debt is Richard Rahn, the chairman of the Institute for Global Economic Growth and a senior fellow at the CATO institute.

“Governments are growing faster than the private sector and debt is growing as a share of GDP. That cannot continue. We will have either a correction like the Canadians did 15 years ago … or we can go on like Greece, and I am afraid with the politics, we are going to have more of a Greek scenario than a Canadian or a Swedish scenario,” says Rahn. He mentions the initiatives of the Swedish and Canadian governments to rein in spending and reduce government debt in the 1990s.

In his speech given at the CMRE dinner Oct. 19 in New York, Rickards explains what happens when governments face a debt trap and elaborates on some of those themes in his book. He believes that the currently high debt levels present a great challenge to monetary stability in the United States and abroad.

Too Much Debt Leads to Currency Debasement

According to Rickards, excessive debt stifles economic growth, which in turn leads governments to look for an easy way out and devalue the currency to promote exports.

“When you have too much debt, it’s jamming up balance sheets, it’s shutting down commerce, shutting down credit, you don’t have enough growth, so currency wars arise,” says Rickards. His term “currency war” means that governments across the globe compete to cheapen their currencies against each other.

If the value of the dollar falls in terms of the euro or yen, products such as Boeing aircraft are cheaper for international buyers. A pickup in orders promotes growth and employment in the United States.

“When you have a world economy that doesn’t have enough growth, countries are tempted to steal growth from their trading partners by devaluing their currency,” is Rickard’s conclusion.

This interpretation is not far-fetched: Because of a sluggish recovery the Obama administration has launched an export initiative that seeks to double exports by 2014. This supports Rickard’s theory in spite of the initiative not mentioning dollar devaluation as a means to reach that target.

While promoting exports through cheapening the currency has some positive effects, there are significant drawbacks. “The United States imports more than it exports. We have had a trade deficit, going back to the ’60s. Maybe our exports are cheaper, but our imports are more expensive. That’s a net cost to the economy. It’s not the free lunch [that people think it is]. Maybe it’s a good deal for Boeing … for everyone else it’s not a good outcome,” says Rickards.

Inflation a Threat but Dollar Likely to Maintain Reserve Status

Rickards then goes on to shed some light on some of the dynamics that happen when different countries want to cheapen their currency at the same time. This is also the explanation why inflation in the United States has been relatively tame, despite a lot of “money printing” by the Fed in the form of quantitative easing.

“Bernanke gave a speech in 2002. When you are at the zero bound interest rates you are not at the end of monetary easing, you can still create monetary easing by devaluing the dollar. You import inflation from abroad; the only problem is that our trading partners have wanted to maintain the value of the dollar. We want to cheapen it, they want to keep it the same,” says Rickards.

The result: Even if the United States prints money to cheapen the dollar, the Chinese and Brazilians print money to keep the exchange rates stable. This leads to inflation in these countries, which showed up in the inflation statistics of emerging markets in recent years, a process that is about to reverse.

While Rickards concedes that because of this interplay, “there is a lot of pressure to get away from the dollar,” he also says that the Chinese yuan is very far from becoming the world’s reserve currency.

“Right this minute there is no currency that is ready to displace the dollar. … To be a reserve currency you have to have a class of investable assets. If people earn those reserves, they need to invest in something. So if you don’t have a deep-layered bond market and everything that goes with it, that means dealers, repo facilities, futures derivatives, [and] financing … you need a bunch of stuff around that. That doesn’t exist and it will take at least 10 years to create, possibly longer.”

Return to Sound Money Possible if We Look to History

While most of the speakers described some of the problems that the global monetary system faces, they also talked about solutions.

“This organization has always been for sound money and it’s really been sort of an oasis in a very inflationary period,” said one of the CMRE officers who helped organize the evening. Many CMRE members believe that a return to a gold standard would help solve many of problems the current system has.

Gillis Bransbourg of the NYU Institute for the Study of the Ancient World and a member of the American Numismatic Society provided a brief historic background on gold’s function in a stable monetary system.

“The truth is that the purchasing power of gold is pretty much stable. A simple comparison between the gold purchasing power in Rome and the U.S. at current prices: The same quantity of gold buys about as much bread now as it used to 2,000 years ago. So gold has been a pretty good store of value in that sense.”

Rickards describes the return to a gold standard as a likely outcome in his book. In his speech he mentioned the stability during the Bretton Woods regime of fixed exchange rates, with gold as the ultimate anchor. “That was a period of currency peace. … Bretton Woods ran on a modified gold standard.”