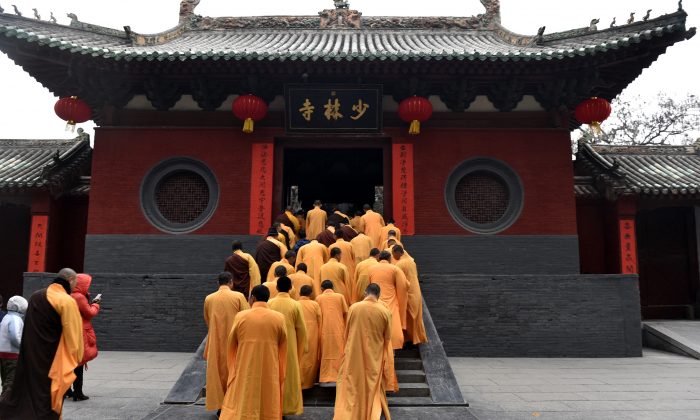 The kung fu-fighting monks of Shaolin Temple are world-famous, depicted in countless movies and television shows.

But under the Chinese Communist Party’s rule, the historic temple has become a shell of its former self. It is not a place for spiritual practice but a business empire, with multiple companies established, including a film and television company, a painting academy, a publishing house, and a performing troupe.

The temple rents out its grounds as a venue for holding events, including a “bikini fashion” beauty pageant in the summer of 2009. That year, the temple also attempted to get listed on the stock exchange. If there was ever something to epitomize the idea of “selling out,” this would be it.

This blatant commercialization of religion has been endorsed by the Chinese regime for decades. In the era of the Cultural Revolution, Chinese Communist Party (CCP) leader Mao Zedong denounced “old ideas, culture, customs, and habits,” ordering the destruction of countless historic sites, temples, monasteries, and places of cultural significance across the country. But with the opening up of the Chinese economy, local authorities have cashed in on the lucrative potential of people’s growing interest in Buddhist temples and Daoist monasteries.

Under the Chinese Communist Party’s rule, the historic Shaolin Temple has become a shell of its former self.

To boost local economies, these destroyed structures have been reconstructed and developed into tourist sites. Their purpose is now far from serving as places of spiritual worship; the sole motivation is making money, from building scenic parks to attract tourists, to selling god statues for people seeking to secure blessings.

Recently, even the CCP has recognized that this flagrant commercialization is bad optics, and have called on religious organizations to tamp it down. On Nov. 23, 12 departments within the Party’s central authorities—including the Propaganda Department, United Front, Cyberspace Administration, and National Tourism Administration—published rules forbidding Buddhist and Daoist organizations from operating as corporations. The rules prohibit business capital, personal investments, or contracts, as well as the sale of expensive tickets for admission into temple grounds and services such as selling the first stick of incense to be placed in the censer, believed to bring good luck.

Monks Colluding With the Party

Decades of warping religions have already left its mark. While the CCP allowed Buddhist and Daoist organizations to continue to exist in order to keep up a facade of religious freedom, it has ensured that abbots act as puppets of the Party.

Shi Yongxin, abbot of Shaolin Temple, is the most well-known example. He has held several administrative posts, including deputy president of the Buddhist Association of China, the CCP-led body that supervises Buddhist activities. He was formerly president of the association’s division in Henan Province, where the temple is located. Former CCP leader Jiang Zemin also appointed Shi as a representative to the Party’s rubber-stamp legislature, the National People’s Congress.

According to an exposé published in the Chinese business publication Caixin in August 2015, Shi had a close relationship with former leader Jiang, the Henan party boss Li Changchun, and the Buddhist Association president Zhao Puchu. It was under Zhao’s instructions that Shi turned Shaolin Temple into a business empire, the report said.

Since the CCP took over Tibet, the Party has required that all Tibetan Buddhist lamas be recognized and approved by the central authorities. To get approval, some Tibetan monasteries have resorted to bribing and currying favor with CCP officials. Chief among them is Zhu Weiqun, the deputy head of the United Front Work Department who was tasked with handling Tibet affairs.

Meanwhile, notable temples have been forcibly seized by local officials to be developed and promoted as sightseeing destinations. The four sacred mountains of Buddhism—Wutai, Emei, Jiuhua, and Putuo—have all been developed into tourist-friendly attractions by local authorities or state-owned firms.

Xingjiao Temple in Xi’an City, Shaanxi Province, is known for housing the remains of the Tang Dynasty monk Xuanzang, whose journey to India to seek Buddhist scriptures inspired the famous novel “Journey to the West.” When local authorities sought for the temple to be recognized as a UNESCO World Heritage site, they proposed for large parts of the complex to be demolished and replaced with a newer building, according to a report by the South China Morning Post.

In some instances, tourism plans have backfired. At the 1,700-year-old Famen Temple, also in Shaanxi, local authorities built a scenic park nearby. However, the huge debt they incurred forced them to hire fake monks to roam the grounds and collect donations from visitors.

This blatant commercialization of religion has been endorsed by the Chinese regime for decades.

At the Panlong Temple in Yunnan Province, monks were so fed up with the flocks of tourists that they shut the doors, posting this message for visitors: “Due to the fact that the Jinning County and Jincheng Township governments wish to commercialize and corporatize the Panlong Temple, disrupting the temple’s order, the temple has decided today to temporarily shut the gates for a quiet meditation environment.”

Some temples have become completely occupied by local authorities, from the Administration of Cultural Heritage seizing precious artifacts, to the forestry and tourism department taking charge of the surrounding lands.

Current affairs commentator Li Linyi noted that many local officials are motivated by wanting to score political points and gain promotions by contributing to the GDP (gross domestic product) target. Tourism is an easy way for them to do so.

Why have places of worship become so popular? Li noted that many Chinese have turned to a higher being in hopes of gaining fortune and blessings. At the Nainai Temple in Hebei Province, patrons can sign contracts with the temple to construct a statue and altar depicting whatever god they’d like, whether it’s a “car god,” “study god,” or “government official god.”

Hong Kong newspaper Apple Daily noted in a Nov. 24 article that Jiang and his underlings often visited Mt. Jiuhua and Shaolin Temple to alleviate their guilt about their corruption.

Zhang Ting, Xue Fei, and Luo Ya contributed to this report.