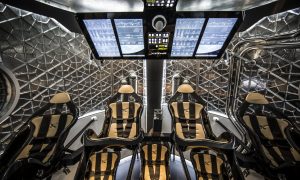 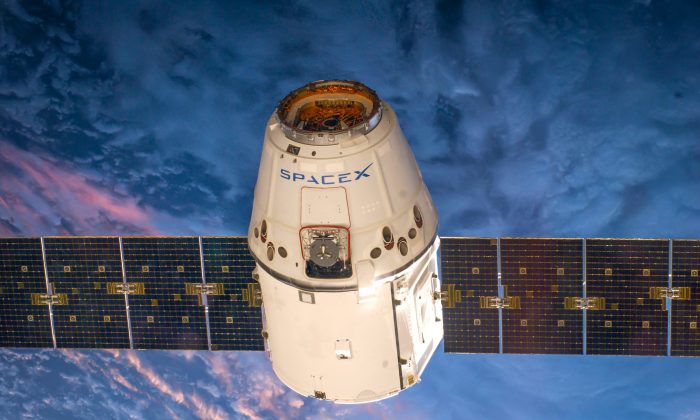 The commercial space industry has hit a rough patch. The dramatic June 28 explosion of SpaceX’s Falcon 9 rocket—meant to deliver supplies to the International Space Station (ISS)—was the third private spacecraft in a year to meet with disaster.

Last October, Orbital Sciences Corp.’s Antares rocket exploded seconds after liftoff, crashing back into the launch center in flames. Three days later, a test flight of Virgin Galactic’s SpaceShipTwo broke up over the Mojave Desert killing one pilot and seriously injuring the other.

The SpaceX Falcon 9, under contract to NASA, was carrying a Dragon resupply capsule with 5,000 pounds of ISS crew supplies, science experiments, and what was to be the first International Docking Adapter, to enable future commercial crew vehicles to dock to the station.

It was also meant to bring back to Earth 1,400 pounds of space station hardware, science experiments, and trash. SpaceX has the only resupply vehicle capable of bringing goods back to Earth as well as delivering.

It’s a significant loss not only for SpaceX, NASA, and the ISS, but also for students and private companies with research payloads onboard, not to mention the list of commercial satellite clients SpaceX has in queue for upcoming launches. They’ll now have to wait and suffer the business losses until SpaceX can identify the problem, fix it, and launch again.

The companies know how to do failure analysis. … They know how to bounce back from this.
— Micah Walter-Range, Space Foundation

Such are the risks of space ventures. As the industry likes to say: spaceflight is hard.

But it carries another level of significance: spaceflight may be hard, but is it too hard for private companies to make a go of it?

Micah Walter-Range, director of research and analysis at the Space Foundation, a nonprofit dedicated to raising awareness of all space-related endeavors, says it’s all par for the course. Whether under NASA supervision or not, there will be failed missions and setbacks. Moreover, the players in the commercial game are resilient, he said.

“The companies know how to do failure analysis. … They know how to bounce back from this,” said Walter-Range.

Indeed, SpaceX failed three times and almost went bankrupt before achieving its first successful launch in 2008, destroying a U.S. Air Force satellite and some NASA experiments in the process. It could have been the end for SpaceX, but its visionary founder Elon Musk pressed on, and he’s shown no signs of slowing down after this latest setback.

SpaceX already has six successful ISS resupply missions under its belt, and based on that track record, NASA affirmed its confidence in continuing the relationship.

“SpaceX has demonstrated extraordinary capabilities … and we know they can replicate that success,” said NASA administrator Charles Bolden in a press release after the failed launch.

Bolden also made it clear that “the commercial cargo program was designed to accommodate loss of cargo vehicles.”

Professor Howard McCurdy, a space history expert at American University, also believes in commercial space endeavors. The private sector, he argues, can do a much better job than NASA at bringing down costs as the number of launches scales up. Private firms are simply better at running businesses than government agencies.

So the current logic is that NASA’s role is to help seed the industry, as it did with the airline industry, by awarding contracts for launches and resupply missions, to share the financial burden as the private sector matures.

Today, private companies are taking the main stage in the space industry.

Thus space isn’t much different from the opening of other new frontiers.

The early European expeditions were all for the glory of the crown and country. Then after some time, governments provided seed money to entrepreneurs who were ready to take risks to realize the potential of the new opportunity. The first commercial voyages were expensive propositions fraught with failure and disappointment—and great rewards.

And so it is with the final frontier. Initially only the purview of governments—specifically the United States and the Soviet Union—today, private companies are taking the main stage in the space industry.

The Space Foundation’s 2015 edition of “The Space Report: The Authoritative Guide to Global Space Activity,” reveals that dollars spent last year by nonstate actors far outstripped that of state actors.

There are over two dozen companies capable of spaceflight and about 21 companies with launch capabilities. Hundreds more companies across the world are involved in manufacturing satellites, building ground stations, and supplying all the other space-related equipment that stays on Earth.

The poster boy for the private space business is certainly former PayPal CEO Elon Musk, but there are other big names in the game too.

Musk founded SpaceX in 2002 (and Tesla in 2003), and within only eight years he could boast having the first private company to put a spacecraft in orbit and land it back on Earth. Musk has more big plans that include creating reusable rockets and capsules, providing satellite Internet to the world, and finding a new home for humans on Mars.

United Launch Alliance—a Lockheed Martin and Boeing partnership—conducts most U.S. military launches. Boeing is also the second company, along with SpaceX, that NASA contracted to develop space taxis to ferry American astronauts to the Space Station.

Orbital Sciences Corporation—now Orbital ATK after a merger with Alliant Techsystems Inc. in February—is the other private firm aside from SpaceX that resupplies the ISS.

Making Space Accessible to All

This doesn’t mean anyone can be a space tourist (not yet), but we’ve all become participants and beneficiaries of the commercial space industry—every time we use a GPS, look for the closest Uber ride, or watch satellite TV, that’s commercial space at our fingertips.

“You don’t need government funding, you don’t need super high-tech labs, you can use essentially commercial components to build satellites,” said Walter-Range from the Space Foundation of this shift.

“The tech is just so much more accessible so we’re going to see people coming up with more creative uses for it,” he said.

Satellite technology is the biggest driver of this shift, and it’s the biggest single revenue engine of the private space economy too—worth $203 billion in 2014. By the end of last year, there were 1,261 full-size operating satellites in orbit representing 57 countries, according to the Satellite Industry Association.

A particularly exciting innovation has been the the development of low cost, miniature satellites called nanosatellites, weighing under 22 pounds (10 kg), and the subset of nanos known as cube satellites, or cubesats, that are just 4 inches (10 cm) along each side and weigh barely 2 pounds (1 kg).

Of course cubesats aren’t nearly as powerful as a 10,000-pound satellite, but the idea isn’t to send up one, but a “swarm” of them—the benefit being that more units means more coverage of the Earth per day and more frequent observations of the same area. Moreover, they’re considered almost disposable in terms of cost, and essentially negligible in terms of cargo space.

Two companies, SpaceX, working with Google, and OneWeb, a startup with investors like Virgin Galactic, Airbus, Intelsat, and Coca-Cola, are in a race to offer satellite broadband Internet to every corner of the world. OneWeb said it will launch a constellation of more than 600 small satellites, while Musk’s plans call for 4,000 satellites.

NASA has been experimenting with what it calls PhoneSats, which are essentially boxes with Google Android smartphones inside. Off the shelf smartphones are seen as ideal for satellite systems because they already have fast processors, versatile operating systems, miniature sensors, high-resolution camera interfaces, and GPS receivers.

If smartphones are powerful enough to communicate from space and can withstand the long-term radiation, space becomes yet that much more accessible. The tests so far have gone well.

The U.S. National Laboratory aboard the Space Station is also available to private sector interests, and even high school student projects.

In 2011, NASA handed over management of the lab to the Center for the Advancement of Science in Space (CASIS). CASIS has funding from NASA, but it’s also meant to generate revenue through leasing experiment space and astronaut time to the private sector and other interests. For example, Novartis has sent mice to space to study the impacts of microgravity on muscle development and atrophy.

According to Patrick O’Neill, CASIS communications manager, over 50 percent of research investigations that take place in the lab are on behalf of private firms, ranging from Fortune 500 companies to startups.

“We are seeing a strong uptick toward commercialization,” said O’Neill, adding, “My hope is that over next few months and years we’ll see even more.”

Since 2011, when NASA retired the Space Shuttle, the United States has relied on the Russian space program to ferry American astronauts to and from space. Each seat on a Russian Soyuz craft cost NASA $76 million last year, up $6 million per seat from 2013.

The sheer cost, coupled with increasing tensions between the United States and Russia, particularly over Ukraine, has put extra pressure on NASA to act as quickly as possible to assure its own crew transportation capabilities.

This job has been contracted to the private sector. In 2014, NASA awarded Commercial Crew Program (CCP) contracts to Boeing ($4.2 billion) and SpaceX ($2.6 billion), to develop crafts to carry astronauts to and from space for $58 million per seat.

Both companies are scheduled to conduct crewed flight tests in 2017—if they can meet their milestones.

Officially, NASA said the failure of Falcon 9 won’t affect the timeline for the CCP.

“The lessons learned from this event could provide insight into a weakness or flaw that might not have been otherwise revealed until much further down the line,” said NASA on its website.

To affirm that plans for the CCP remain on track, on July 9, less than two weeks after the Falcon 9 rocket incident, NASA administrator Charlie Bolden announced the four astronauts who will train to fly on the SpaceX and Boeing crafts. In a blog post, Bolden heralded being able to launch astronauts on American soil, in American-owned spacecrafts, involving contracts with over 350 American companies.

Yet the recent string of losses brings home the extreme challenge of the task. Launching humans into space is inherently much more difficult than launching satellites.

“Humans have more complex needs, such as breathable air, food, staying warm, staying cool, and protection from the space environment. Humans must also be able to return safely to Earth from their trip to space,” states “The Space Report 2015.”

“We’re half century into orbital flight, we shouldn’t have failures like this. … The risks shouldn’t be the numbers that we’re seeing,” said McCurdy.

Since 2010, there have been 443 orbital launch attempts worldwide, of which 24 have failed, giving a failure rate of just over 1 in 18. Four of the failures were American crafts so the U.S. failure rate is about 1 in 111. This is far from what NASA will allow for human flight.

For the Commercial Crew Program, NASA has set the Loss of Crew requirement at no more than 1 in 1,000, which would make the crafts “approximately an order of magnitude safer than the Space Shuttle for ascent plus entry,” according to NASA’s Commercial Crew Transportation System Certification Requirements.

Despite recent setbacks, McCurdy is still betting on private industry to be able to pull it off, particularly with the number of companies now in the space business.

“The beauty of the system is if you have so many entrants … and one of them guesses right, you have the next Microsoft, or the next Intel,” said McCurdy.

In other words, the commercial space era has arrived and is here to stay—and like any nascent industry of this magnitude, there are bound to be bumps along the way.

CORRECTION: A previous version of this article incorrectly stated that both pilots were killed in the Virgin Galactic SpaceShipTwo incident on Oct. 31, 2014. Only one pilot died. Epoch Times regrets the error.