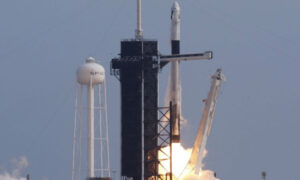 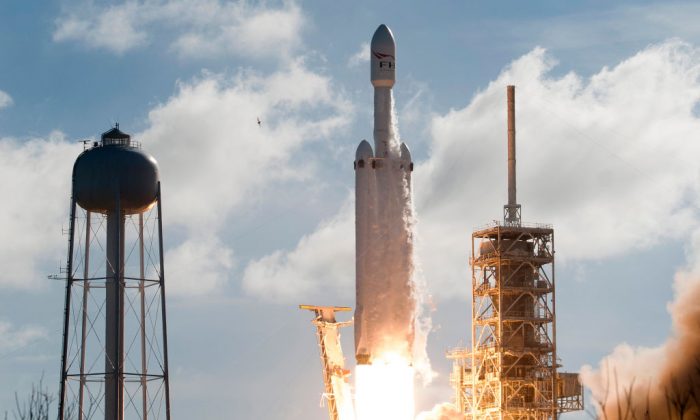 The SpaceX Falcon Heavy launches from Pad 39A at the Kennedy Space Center in Florida, on Feb. 6, 2018, on its demonstration mission. (Photo credit should read JIM WATSON/AFP/Getty Images)
Space

On Feb. 6, Elon Musk’s SpaceX launched its largest rocket into the blue Florida sky. Onboard was “Starman,” a dummy strapped into the billionaire’s cherry red Tesla roadster. Minutes later, fans cheered as Musk topped himself by nailing a simultaneous landing of the Falcon Heavy’s boosters. It was arguably a turning point for the commercial space age.

Airlines were somewhat less thrilled. On that day, 563 flights were delayed and 62 extra miles added to flights in the southeast region of the U.S., according to Federal Aviation Administration data released June 26 by the Air Line Pilots Association, or ALPA.

America’s airspace is a finite resource, and the growth of commercial launches has U.S. airlines worried. Whenever Musk or one of his rivals sends up a spacecraft, the carriers which operate closer to the ground must avoid large swaths of territory and incur sizable expenses.

Most of the commercial activity to date has been focused on Cape Canaveral, the Air Force post on Florida’s Atlantic coast, where Musk’s Space Exploration Technologies Corp. and Jeff Bezos’s Blue Origin LLC base their stellar operations. It is one of 22 active U.S. launch sites, and a number of other locales—including Brownsville, Texas; Watkins, Colorado; and Camden County, Georgia—are pursuing new spaceport ventures to capitalize on commercial space activity.

Bezos is blasting off from land he owns in West Texas; Virgin Group founder Richard Branson plans to launch tourists from southern New Mexico as early as next year; and Musk is planning an eventual new SpaceX launchpad in extreme southern Texas, near South Padre Island. While this trio of space tycoons currently dominate the nascent industry, more companies will soon join the party. And the potential for what may eventually be daily launches carries major implications for air travel.

“Commercial space launch needs to be better integrated into the national airspace,” noted Caryn Schenewerk, Hawthorne, Calif.-based SpaceX’s senior counsel and director of government affairs. The Falcon 9 exceeds 60,000 feet on launch “in a quick 90 seconds,” with its reusable rocket boosters only requiring use of the airspace for one minute before landing.

Tim Canoll is president of ALPA, the union which represents 60,000 U.S. and Canadian pilots. He cautions that work is needed to make the two industries operate seamlessly, saying June 26 at a hearing of a House Transportation and Infrastructure subcommittee in Washington that FAA operations don’t have “real-time data” on rockets’ movements. Both industries need to learn more about each other during any federal rulemaking process, he said.

The U.S. licensed only 23 commercial launches last year, but that’s likely to increase. As the launch industry matures, the ultimate goal is to incorporate spacecraft into the routine flow of the 42,000 daily aircraft that the FAA controls, making a SpaceX Falcon 9 bound for the International Space Station no different than an American A321 headed to Miami. “The next step,” said Canoll, is to put space travel and air travel together, so rockets “can operate along with us.”

There is a lot of money at stake. Airlines say their average cost of “block time,” the industry metric for the period when an aircraft is taxiing or flying, was $68.48 per minute in 2017, or $4,109 hourly, led by crew and jet fuel expenses. The average delay of those 563 flights on Feb. 6 was 8 minutes. For perspective, 100 flights delayed by 10 minutes costs about $70,000, ALPA noted. To make matters worse, the block time average is likely to rise this year—further aggravating airline executives and pilots whenever a SpaceX or United Launch Alliance LLC rocket closes airspace.

“These restrictions have led to extensive and expensive delays to commercial air traffic that are unsustainable,” ALPA said in a white paper released June 26.

“We are smart enough to solve this problem.”

The U.S. airlines’ trade group, Airlines for America (A4A), has urged the FAA to “carefully consider the safety and efficiency impacts to the traveling public” in crafting an integration plan, spokeswoman Alison McAfee said in an email. For example, the group expressed “grave concerns” in a June 15 letter to the FAA about a proposed Spaceport Colorado, which would be located at a small airport less than 10 miles southeast of Denver International, the fifth-busiest U.S. airport.

This kind of uneasy coexistence has become the norm as the FAA continues to restrict airspace for commercial launches and re-entry, often for an hour or more. The closed space can extend for hundreds of miles along a rocket’s planned flight path, given the potential risks if a craft explodes in flight. That area will need to decrease over time to minimize airline disruptions, industry experts told Congress. Specifically, they said computer simulations of such disasters block off more airspace than necessary.

In March, the FAA formed an aviation committee to assemble recommendations for a regulatory approach to the commercial launch industry. The new rules will offer safety objectives while not dictating any vehicle design or operational mandates for space firms.

Tests have shown that rocket telemetry data can flow into current air-traffic control systems and give controllers real-time awareness on the vehicle’s movement. Of course, air traffic controllers direct an aircraft’s course and speed—a power they won’t have with space vehicles.

The industry and regulators need to develop tools to help further existing efforts to build a space data integrator system, designed to automate the flow of real-time rocket data and the release of blocked airspace because, she said, “we are smart enough to solve this problem.”