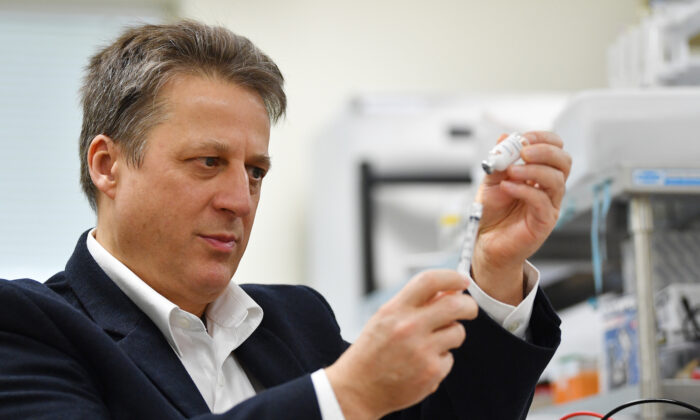 Billions of dollars in government funding ploughed into COVID-19 vaccine research during the pandemic has helped push the boundaries of drug research beyond their usual limits in the race to create the jab, says lead researcher of the Spikogen (or COVAX-19) vaccine.

Professor Nikolai Petrovsky says the pandemic has been a springboard for major drug firms to further secure their dominance in the pharmaceuticals industry after aggressively securing massive government contracts.

“If anything, COVID-19 is the cover. But the real payoff for most of them, as they see it, is if this becomes the technology of the future,” Petrovsky told The Epoch Times.

Petrovsky, along with Adelaide-based biotech firm Vaxine, is behind the protein-based vaccine Spikogen. They were one of the Australian-based projects slated to create a COVID-19 vaccine; the other was a partnership between the University of Queensland and CSL, which was shuttered last year after several HIV false positives emerged during testing.

While Vaxine received A$1 million ($723,000) in initial grant funding from the federal government, the company has since struggled to find a local partner to help manufacture the drug in the country.

Instead, Petrovsky said he has had to turn overseas, eventually settling on Iran-based firm Cinnogen. Now they are rolling out 2 million doses of their vaccine across the Middle Eastern country.

“When we did the rounds and talked to all the big companies, they were all interested in the data,” Petrovsky said, adding however, that subsequent follow-up meetings yielded little result and he was told in some instances that certain firms would instead push forward with mRNA vaccines.

Before the pandemic, messenger RNA (mRNA) vaccines had yet to be approved for wider use in humans. The relatively new technology delivers single-stranded RNA molecules that instruct the body to make a specific protein. The new protein made in the body now “trains” the body’s cells to create an immune response.

While there has been much excitement around the roll out of the technology during COVID-19, researchers concede that the platform is in its infancy compared to tried-and-tested platforms like protein-based vaccines.

“You have a platform that could become the next big platform, like small molecule drugs or monoclonal antibodies, that could be a trillion-dollar industry,” Petrovsky said.

The professor, who is also director of endocrinology at the Flinders University Medical Centre, said that many firms were engaged in the “massive hype” around mRNA vaccines, and once the first movers broke ground on a viable vaccine model, what ensued was a “follow the leader” type mentality—typical in corporate competition.

“There wasn’t a lot of time for people to sit down and think things through (during the pandemic). Most companies just grabbed whatever was on the shelf, or in the case of Pfizer, grabbed another small company, BioNTech, and ran with it,” he said.

Once Pfizer and AstraZeneca had successfully settled on their approach to the vaccine, other firms followed suit with Sputnik and Johnson and Johnson “copying” the adenovirus viral vector model of AstraZeneca, and Moderna on mRNA.

“Protein sort of got lost in all that,” Petrovsky said. “I guess it was almost euphoria of this completely new technology. It’s exciting and it sounds sexy.”

“We actually did make mRNA vaccines ourselves at the beginning of last year as an alternative. We made DNA vaccines, we made mRNA, and we made protein,” he said. “The results we got with the protein were so much better. That’s what we ended up going with.”

The Epoch Times reached out to Pfizer for comment but did not receive a response in time for publication.

“I guess the classic example would be Israel with Pfizer—not just a commitment to mRNA, but also to a single company for the supply of one technology for everyone in the country, and then mandating it and forcing everyone to have it,” he said.

“We have this collision between what are clearly powerful commercial interests and public health policy, and those two things should always be 100 percent separate,” he said, adding that this was what’s been occurring at a “global level” due to the pandemic.

Meanwhile, to gain approval in Australia for Spikogen, Petrovsky has turned to a GoFundMe campaign to raise the necessary funds needed to perform testing and obtain the data needed for a successful application to the Therapeutic Goods Administration (TGA)—Australia’s drug regulator—as well as pay its A$300,000 ($214,000) application fee.

“That’s just over a matter of five or so weeks,” Petrovsky said. “Without any real advertising, just word of mouth. Similarly, I think over 30,000 people have registered to be part of future trials.”

“There is enormous demand—pent up demand—for a protein-based vaccine, not just in Australia, but globally,” he said.

Protein-based vaccines, while slower to develop, are cheaper to manufacture and easier to store. They only require normal refrigerator temperatures compared to sub-zero conditions needed for mRNA or viral vector vaccines, which makes them suitable for supplying to developing countries without cold-chain infrastructure.

According to Nature News, protein vaccines also appear to have a high safety profile, with 50 or so studies finding that typical reactions in other jabs, such as headaches, nausea, and chills, were far less common.

In a twist of irony, Petrovsky, who is vaccinated with Spikogen, is still considered unvaccinated under state public health orders, and he has been barred from entering his university grounds. Authorities say they only recognise vaccines approved by the TGA.

His attempts at gaining an exemption have not succeeded, which Petrovsky says, is a “damning” indictment of the motivations behind vaccine mandates.

“If they were about public health, then the exemptions should be quite generous to make sure that no one gets unfairly treated. But that clearly is not the intention,” he said.

“Mandates are nowhere in any rulebooks on how to successfully run a vaccine programme,” he added. “[That’s] all about education, informed consent, encouragement, and back to education again.”

“It has to be unbelievably safe and have no long term or serious side effects, and that’s why the only vaccines traditionally mandated have astonishing safety profiles.”