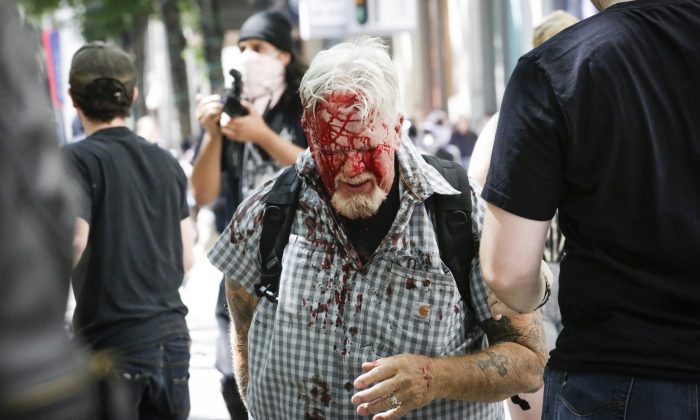 The president made the accusation while criticizing Rep. Ayanna Pressley (D-Mass.) for refusing to condemn the attack on a migrant detention facility by an armed member of the extremist group Antifa.

Pressley is one of the four hard-left Democratic congresswomen whom Trump has harshly criticized over their history of anti-American statements.

Pressley, Rep. Ilhan Omar (D-Minn.), and Rep. Alexandria Ocasio-Cortez (D-N.Y.) didn’t respond earlier this week when asked if they would condemn the Antifa terrorist attack on a migrant detention center in Tacoma, Washington.

“So these congresswomen, their comments are helping to fuel the rise of a dangerous, militant hard left,” Trump said at the Make America Great Again rally in North Carolina on July 17.

Tacoma police officers killed the self-identified Antifa extremist on July 13 after the man, armed with a rifle, lobbed firebombs at a privately operated migrant detention center building and cars parked nearby. The extremist managed to set a car ablaze and attempted to blow up a large propane tank before police arrived.

In a manifesto posted by Antifa groups, the man, identified as Willem Van Spronsen, repeatedly used the term “concentration camps” to describe migrant detention facilities. Ocasio-Cortez was the first to misappropriate and spread the term, while Tlaib agreed when asked about Ocasio-Cortez’s use of the term.

In his remarks at the rally, the president ridiculed and criticized Antifa. Trump referenced Antifa’s June 29 attack on Andy Ngo, a journalist known for exposing the group’s violence. Ngo was hospitalized with a brain hemorrhage after being punched by masked Antifa members during a rally in Portland, Oregon. After the attack on the Tacoma detention center, Ngo released footage from 2018 of Van Spronsen standing amid a crowd of Antifa extremists.

“These are sick, bad people,” Trump told the crowd. “They are very evil: they are hitting people over the head with sticks, I mean bats, even. They’re whacking people with bats.”

Trump appears to have only addressed Antifa’s activities one other time in 2019. Despite its regular use of violence, the group usually is portrayed in a positive light by establishment media. CNN featured a group which Van Spronsen belonged to—the Puget Sound John Brown Gun Club—in an episode of its “Shades of America” series. The show’s host, W. Kamau Bell, directly told CNN viewers to “do what you can to support them.”

A significant number of Antifa members took part in counterprotests in Charlottesville, Virginia, in 2017. The group’s participation in violent confrontations in Charlottesville is virtually absent from media reports, which tend to focus on white nationalists and other extremists with whom they were clashing, and omit the fact that peaceful, non-extremist protesters were present at the rally and the counterprotests.

“They don’t get the bad press, the press doesn’t want to talk to them,” Trump said on July 17.

While Trump didn’t identify Ngo in his remarks, he suggested that Antifa members tend to attack isolated, defenseless targets.

“You notice they always attack people that really have never been attacked before,” Trump said.

Trump said he had a message for the “hate-filled extremists who are constantly trying to tear our country down.”

“They never have anything good to say. That’s why I say, ‘Hey, if they don’t like it, let them leave. Let them leave,’” he said, as the crowd applauded. “They’re always telling us how to run it, how to do this. You know what? If you don’t love it, leave it.”