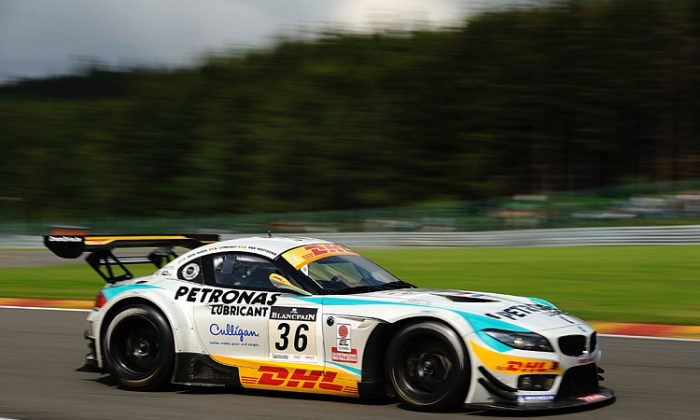 The BMW M3 was allowed a transaxle and a host of other modifications to keep it competitive with Ferrari, Porsche, and Corvette. (James Fish/The Epoch Times)
Motorsports

The American Le Mans Series has accepted the V8-powered BMW Z4 into its GTE class, thereby breaking its own rules.

The GTE class is supposed to pit production-based sports cars from different manufacturers against one another; cars are adjusted via air restrictors and a few other parameters so that very different cars can compete on an equal footing.

Cars in the GTE class are supposed to be based on cars you could buy off the showroom floor. In the case of BMW’s Z4, this has caused some controversy because the ALMS version uses a V8 which BMW does not offer in its Z4 street-car line.

Almost every GTE car is granted a waiver (or two, or twenty) from the rules—the SRT Viper is allowed to use it enormous 8-literV-10 engine, despite the rules specifying 5.5 liters as the maximum. The Corvette is forced to run a 5.5-liter version of its 6.2-liter production engine. The old BMW M3 sedan was given more waivers than any two other cars, to keep it competitive with the high-performance sports cars it raced.

So why would fans complain about the Z4? Those detractors claim that the V8 Z4 is not a “production car” and thus the racing version amounts to a prototype, and is outside the rules. (Many of those same fans complained about the M3, for having too many waivers, but that’s a different story.)

Some racing fans (well, people in general) look at the past as a simpler, better time, when things were done “right.” They look back a time when racing was a lot less expensive, cars were a lot simpler, and literally anyone with a little know-how and a welder could build a winning race car in his garage.

In those days, auto manufacturers would build special street cars just to be able to beat the competition on the race track. Factories would either design whole new cars (smaller builders like Ferrari or Maserati could do this.) Bigger manufacturers like Ford or GM would build “homologation specials”—limited runs of specially optioned cars to earn the label “production car” so those options could be used on the race car.

Nowadays that simply isn’t possible—it would cost too much. Those fans calling for BMW to build an homologation run of 25 V8 Z4s for the street aren’t considering what that would involve nowadays. Any car built and offered for sale would have to meet modern safety and emission standards.

The days are gone where a factory could weld a few motor mounts and bolt in a bigger motor—a V8 Z4 for the street would need a complete powertrain and frame redesign. The cost would outweigh any promotional value gained from racing the new version.

That is a reality old-school fans need to accept—racing nowadays is not something builders like Enzo Ferrari do out of passion (Ferrari famously built his road cars only to fund his racing team.) Racing is now a corporate promotional venture, to build a car’s image and a manufacturer’s brand. It is all about advertising, and if the return on the investment isn’t there, the racing program gets axed.

BMW’s head of Motorsports Jens Marquardt made it very clear in a press statement several months ago that BMW was only interested in GT racing, and only with the Z4. The Z4 was more competitive, and could benefit more from the racing image, while sedans like the M3 were aimed at a different market. Series like ALMS had to decide to grant one Huge waiver to BMW—allowing a non-production engine (though one BMW actually makes for other models) or kicking the factory out of the series.

ALMS management has drawn the ire of its fans for many good reasons—basically that management bankrupted the most popular sports car series in North America. Here, however, ALMS management made a wise choice: given that almost every car on the grid is granted waivers, and given that BMW has been a very welcome addition to the series for several years, ALMS will let the V8 Z4 compete.

This means more promotion for the series, as BMW advertises its involvement. It means more first-rate, factory supported cars on the grid, which makes for better racing. It means BMW fans will now watch ALMS races to see their favorite team compete.

Not all rules are made to be broken, but considering how flexible ALSM GTE rules already were, this extra stretch to squeeze in the new BMW makes perfect sense.