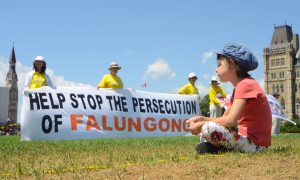 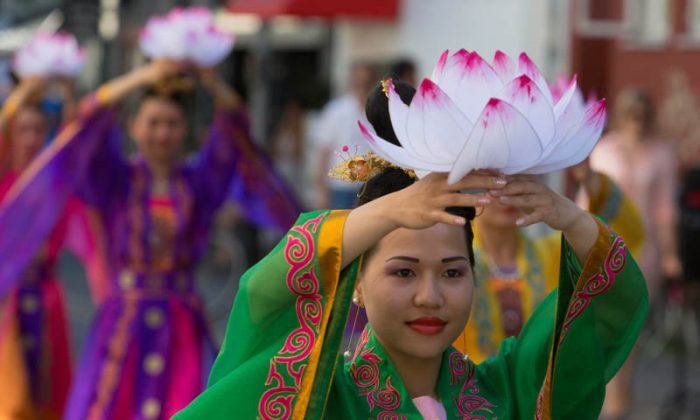 A Falun Gong practitioner carries a paper lotus flower in a parade through the streets of Copenhagen on July 20, 2013. (Matthias Kehrein/Epoch Times)
China

Every July 20, practitioners of the spiritual discipline Falun Gong commemorate a brutal persecution that was set in motion 14 years ago by former Chinese Communist Party leader Jiang Zemin.

Falun Gong, also known as Falun Dafa, is a spiritual meditation practice that involves five slow moving exercises and teachings based on the principles of truthfulness, compassion, and tolerance. It was first taught in public by Mr. Li Hongzhi in 1992 during the height of the qigong boom in China.

Falun Gong spread quickly as word spread of its remarkable benefits to physical health and moral elevation—by 1999 there were an estimated 70 to 100 million practitioners, according to official statistics. For two hours each morning, peasants, factory and office workers, soldiers, intellectuals, Party officials, both the young and old, gathered at public parks and spaces, and did a series of standing and sitting exercises—the former involved stances where arms were raised above heads, while the latter required seating in a cross-legged position.

Despite the meditators’ serene expressions and reported improvement in working environment and performance in many a work place, ex-Party boss Jiang Zemin felt threatened by Falun Gong, and sought its suppression.

A peaceful petition by ten thousand Falun Gong practitioners near Party headquarters and top leadership living accommodations in Zhongnanhai, Beijing in 1999 was upheld by Jiang as an example of a superbly organized Falun Gong “laying siege to Zhongnanhai.” In an open letter to senior officials, Jiang singled out the practice as a threat to the Party’s leadership and the “stability” of the nation.

Jiang’s claims of Falun Gong’s threat to the leadership and society seem somewhat spurious in light of reports by the Party’s security apparatus on the practice. After conducting surveillance on Falun Gong adherents, intelligence officers noted that they were nothing more than what was advertised—harmless qigong practitioners with exceptionally good health, morals, and work ethics.

Still, Jiang pressed ahead with his personal crusade, announcing the start of the persecution on July 20, 1999. He mobilized state machinery to “eradicate” Falun Gong, and even created an extralegal agency, the 610 Office (named after the day of its creation, June 10), to specifically target the practice.

Because Jiang declared “no measure to excessive” in dealing with Falun Gong, practitioners lost their jobs; hundreds of thousands were thrown in jails, labor camps, and mental institutions; over 3,000 were persecuted to death.

Researchers have even gathered evidence to show that Chinese military and civilian hospitals have engaged in the harvesting of organs from Falun Gong practitioners for sale. Tens of thousands of practitioners are estimated to have been slaughtered for their organs, which were trafficked for a profit.