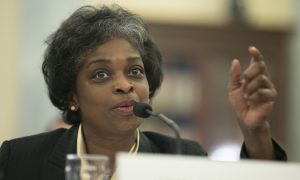 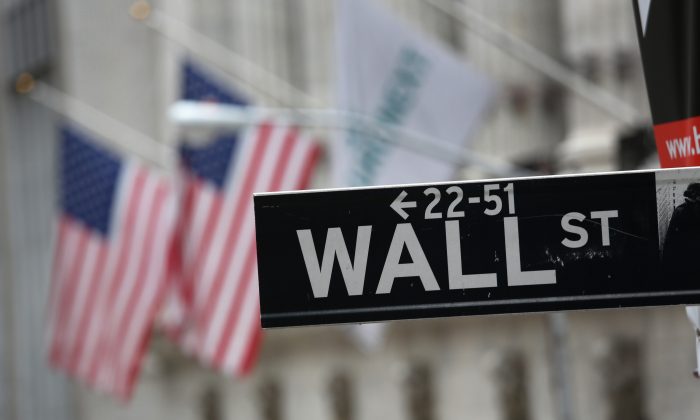 Wall Street outside the New York Stock Exchange on Sept. 16, 2013. Five years after the beginning of the financial crisis marked by the bankruptcy of Lehman Brothers, Wall Street has more than recovered its losses, although unemployment in the United States remains high. (John Moore/Getty Images)
Opinion

Commemorating the Financial Panic: It Ain’t Over Yet

NEW YORK— Media outlets love anniversaries. They become the makers and news-pegs for one-day stories that become pretexts for episodic coverage of key issues that substitute for ongoing critical reporting,

It’s a form of nostalgic “how are we doing coverage” that aims to depoliticize the past or give us a grade, but not look too closely at the causes of the crisis.

So, no surprise, the president will mark the occasion this week, with, what else—a speech, no, less than a speech, really “remarks,” aimed at providing a positive spin for a series of economic disasters that we have yet to climb out of.

Reuters reports, “A White House official said Obama will deliver remarks in the White House Rose Garden on Monday to mark the fifth anniversary of the financial crisis, which was accelerated on September 15, 2008 when the Lehman Brothers firm filed for bankruptcy protection.

“The Democratic president will focus on the positive, discussing progress made and highlighting his prescriptions for boosting job creation amid budget battles expected with Republicans in Congress in the weeks ahead.”

Is this really an anniversary? Bear in mind that that venerable bank, Bear Sterns went down a year earlier, in 2007, and that consumers were being targeted by financial predators pedaling subprime loans and other financial frauds for many years prior.

To anoint an anniversary, you need a date, even if it is not precise, and, so, the Mensas in our media have decided that the collapse of the Lehman Brothers investment bank in 2008—an event that is still mostly murky—with many saying that the government acted irresponsibly in letting this “too big to fail” financial institution fail, has been identified as the tipping point.

The London-based Guardian, unlike most of the American press, revisited just what brought Lehman down. (It was a bank incidentally that was one-third owned by its employees.) They interviewed Michele Nicoletta, then chief of “Latin American flow credit trading” at Lehman, and the person in charge of the firm’s trading of bonds and credit derivatives in emerging markets.

Heidi Moore reports, “The public recriminations against the firm were difficult to bear, she says, knowing that Lehman was paying the price for the risk-taking culture most veterans considered normal at all Wall Street firms. ’I think Lehman was a bit of a scapegoat. It got singled out. There was a lot of speculation as to why Lehman was the chosen one as opposed to anyone else. I don’t think Lehman was the house of greed; I think Lehman was made an example of, and it was unfortunate.’”

Lehman’s collapse, according to studies of that volatile period, was blamed on then-Treasury Secretary Hank Paulson, who, when heading Goldman Sachs, was a prime competitor. His animus towards Lehman was reportedly bitter and very personal.

Lehman was headed by Dick Fuld. another brass knuckles Wall Street warrior, who later referred to himself as “the most hated man in America.” Like his competitors he rode the fraud-intensive subprime mortgage market to glory until it imploded over one of America’s most prestigious banks and turned it into the financial equivalent of Dante’s inferno.

Fuld became scapegoat number one, in part because of his arrogance and lousy PR skills, but he was hardly alone in defrauding customers and short-changing our economy.

Another Guardian article puts the date of this “anniversary” in doubt, too, after talking with Lord Turner, “who took over as chairman of the Financial Services Authority a week after the American authorities failed to find a buyer for Lehman, believes the crisis pre-dated the collapse of Lehman, and even the run on Northern Rock in September 2007. ‘For me the lesson learnt is that the roots of this crisis go back very deep. Over a number of decades we allowed too much leverage to grow in the real economy, and we allowed the banking system to become over-leveraged. I think we were running a system with such small buffers of capital and liquidity that by 2006-07 a crisis was bound to occur.
…’We created an over-leveraged financial system and an over-leveraged real economy.’”

So much for the idea of a “fifth anniversary” that the media is turning into a news event! It was the system that created the crisis, not any one banker.

Another British paper, The Independent, writes: “Amid hours of television and acres of newsprint devoted to the inauspicious anniversary of the banking crisis’s defining moment, there really remains only one question: have we changed enough to stop it happening again?

“To put it another way, has Washington created a safe banking system, forcing Wall Street to take fewer risks, or have the bankers won again, lobbying the politicians to retain the status quo? Unfortunately for taxpayers, the answer is: mainly the latter.”

We know that the people who were hurt the most for the most part were not bankers on Wall Street, as Derek Thompson reports in the Atlantic in an article called, “Employment is down and profits are up.”

The advocacy organization, Public Citizen, sums up the ongoing damage:

Meanwhile, the 1% on the top has done very well. AlterNet interviews inequality experts Thomas Piketty and Emmanuel Saez, who say we are now in the aftermath of a crisis that is being discussed as if it is over, we are facing the biggest gap between rich and poor ever recorded by economists.

They say, “In the aftermath of the Great Recession, the top 1 percent has gobbled up nearly all of the income gains in the first three years of the ‘recovery’—a stupefying 95 percent. Economic inequality is even worse than it was before the crash. In fact, last year the rich took home the largest share of income since 1917 with the exception of only one year: 1928.”

President Obama has been so obsessed with the war victims in Syria that he seems to have forgotten the victims of the economic calamity in America. Tell me why he’s marking Wall Street’s penchant for disaster capitalism when he should be identifying with the people who are standing up to Wall Street.

As it happens, the day after President Obama, tsk-tsks about an arbitrarily selected event five years ago, there will be a real anniversary on Sept. 17 here in New York to commemorate the second anniversary of Occupy Wall Street (OWS). Charles Blow of the New York Times reports that even as the movement flagged, its key slogan about the 99% versus the 1% has won broad acceptance.

He writes, “There are signs that the narrative may have taken hold in some parts of the electorate beyond the protesters in the parks and beyond a presidential campaign between an up-from-the-bottom, charismatic incumbent and his awkward aristocratic competitor.”

He points to the victory of a populist politician as a candidate for New York’s mayor—an Anti-Bloomberg in a city that watched Bloomberg use the police to physically attack the OWS.

He also argues, “There are also national signs of unease. According to a Pew Research Center poll released Thursday, fewer than 8 percent of respondents thought that, after the recent recession, government policies have helped the poor, the middle class or small business a great deal. About five times as many believe they’ve helped the wealthy, large banks and other financial institutions, and large corporations.

“And as the stock market soars for those with enough money to be in it, a Gallup poll released Thursday found that one in five Americans say they have struggled to afford food in the last year and that access to basic needs is near a record low.”

We don’t need the New York Times to tell us all this, but at least they can’t bury the real economic blues as much as they did any more.

The chief Investment officer of Bank of America tells Business Insider that he fears the economy is still what he calls “crashy,” and warns that “if the US economy does not significantly accelerate in coming quarters, it never will.”

His message to market boosters: “Curb Your Enthusiasm.”

What this and many similar articles are saying is a real economic recovery and more job creation is very unlikely. In fact, all the war talk over the last week and the new debt debate is just making things more uncertain.

What’s as bad is the fact that most of the reforms proposed to insure more stability were whittled away by legislators under heavy lobbying pressure from the banksters, Phil Angelides who ran the Financial Crisis Commission is warning we are not out of the woods.

He is not being listened to today any more than he was when he issued his damming report. (I wrote the foreword to the Cosimo Press edition of the illuminating study.) See this video for a far more enlightened discussion of what happened with Lehman and is still happening.

So please don’t break out the bubbly to celebrate this phony anniversary. Instead do what you can to revive and reenergize Occupy Wall Street to fight the battle for economic justice that is far from won.