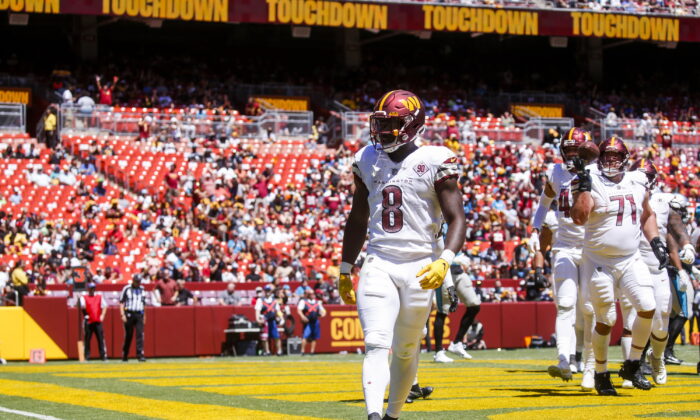 Washington Commanders running back Brian Robinson (8) celebrates his touchdown during the first half of a NFL Preseason football game between the Carolina Panthers and the Washington Commanders at FedExField in Landover, Md., Aug. 13, 2022. (Shaban Athuman/Richmond Times-Dispatch via AP)
NFL

WASHINGTON—Washington Commanders rookie running back Brian Robinson Jr. was shot during an attempted robbery or carjacking, the NFL team said on Aug. 28.

The 23-year-old former Alabama player was taken to a hospital with what the team called non-life-threatening injuries. The team said in a statement staff members were with Robinson at the hospital.

Coach Ron Rivera said he had been with Robinson.

“He is in good spirits and wanted me to thank everyone for their kind words, prayers & support,” Rivera said on Twitter. “He wants his teammates to know he appreciates them all for reaching out and he loves them all & will be back soon doing what he does best.”

D.C. police reported a shooting in the northeast section of the city and said it was on the lookout for two possible suspects.

Robinson, a third-round draft pick, was was expected to start for the Commanders this season.

He had been particularly impressive during training camp and preseason games, likely earning the job over incumbent Antonio Gibson.

“Brian’s been great,” offensive coordinator Scott Turner said recently. “He’s a real serious guy. Football is extremely important to him. He takes a lot of pride in being a physical runner.”

Robinson traveled with the team for its preseason finale at Baltimore on Saturday night but did not dress.

The 6-foot-1, 228-pound back rushed for 1,343 yards and 14 touchdowns last season at Alabama. The Commanders selected him with the 98th pick in the draft.