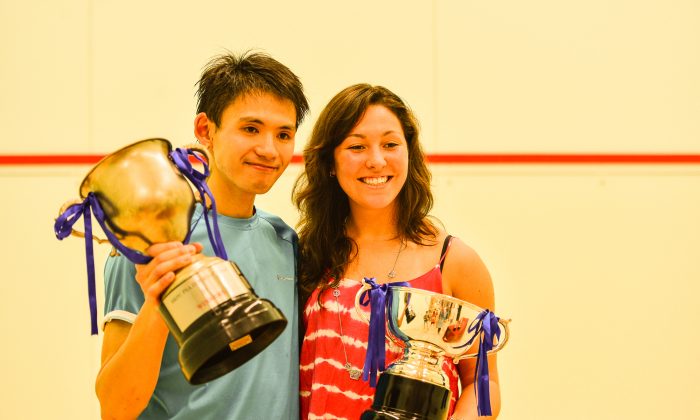 Max Lee Ho Yin and Amanda Sobhy celebrate their respective wins in the Men’s and Women’s Finals of the HKFC Meco PSA/WSA International 25 tournament at the Hong Kong Football Club on Saturday May 24. (Eddie So)
International

Hong Kong—Squash
By Eddie So

HONG KONG—When meeting Amanda Sobhy one can’t help noticing her bewitching smile which may be a disguise for her otherwise impregnable amour as once she gets on the squash court it is all business for the 20-year-old American No.1.

This was again true when tournament No.2 seed Sobhy, a Long Island resident vanquished her occasional playing partner and good friend Rachael Grinham of Australia, 11-6, 11-2, 11-9 for the HKFC/Meco Women Squash Association International 25 (WSA 25) title at the Hong Kong Football Club on Saturday May 24.

It took Sobhy just 28 minutes to achieve victory over Grinham a former World Champion and ex-World No.1 with 33 titles to her name. This title is Sohby’s seventh in the last 12 months which includes the Buler Challenge Cup, which she won in Hong Kong last July.

Sohby who is still balancing her time between study and squash tournaments plans to join the professional circuit full time after graduating from Harvard University in May next year where she is studying Social Atrophy and Global Health.

After the tournament she said she was relishing the prospect of “finally enjoying” what every visitor does when in Hong Kong—dining and seeing the sights.

Standing nearly 5 foot 8 inches tall, Sobhy imposes herself well on the court with speed, stamina and a dominating presence she is expected to be at the top of World squash for many years to come, according to Ong Beng Hee of Malaysia, who believes she is more than capable.

In Ong’s anaysis, his compatriot and current World No.1 Nicol David is the only player standing in her way.

“Amanda is that good,” said Malaysian Beng, the losing finalist in the men’s competition.

“It was a tough game,” but the American left-hander said it was her game plan from the onset that helped her overtake Grinham.

“I stuck to my game plan, and I knew I had to attack and keep Rachael in the middle and the back, and cover well,” she said.

Grinham had a different outlook on her defeat, saying: “Amanda is a strong player and she is an all rounder.”

Ong should get a chance for revenge as both players are likely to meet in this year’s Asian Games in Icheon, South Korea, scheduled for September 14 to October 4.