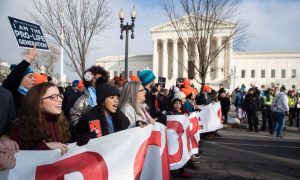 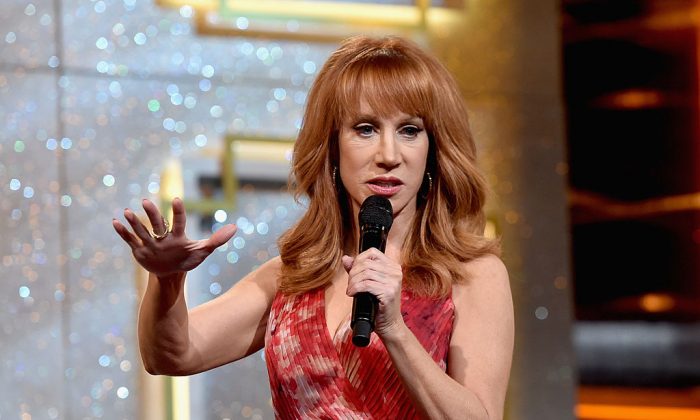 “Covington’s finest throwing up the new nazi sign,” wrote Griffin, claiming that some players were holding their thumb and pointer fingers together along with three other fingers up in the air.

But she appears to have mistaken the standard “OK” sign with the standard celebration after a three-point shot is made.

Griffin deleted the tweet, which included a photo of the basketball game. But a number of people saved screenshots of the anti-Trump comic’s post.

“MSNBC’s Chris Hayes was kind enough to reply and correct me, so I deleted the tweet,” she told the New York Post.

Students at the school made headlines over the weekend, prompting condemnation from mainly liberal celebrities, news outlets, and politicians. However, a longer, unedited video of the incident surfaced, appearing to vindicate the students.

bipartisan dunking on kathy griffin, a tradition unlike any other pic.twitter.com/oqJncUYkbG

Washington Examiner writer Siraj Hashmi noted that there was a “bipartisan dunking on Kathy Griffin, a tradition unlike any other” after her erroneous post.

The “ok” sign isn’t racist. If it is, Apple has some serious explaining to do… 👌 https://t.co/DwnFe94I7N

Get a grip. It’s the signal for a three point shot. pic.twitter.com/gKFPh2EHIG

Please illuminate why the symbol for a three point shot (this IS a basketball game) is disgusting? pic.twitter.com/SWWOSNtTW4

On Jan. 23, Covington High School re-opened amid a barrage of threats as a result of reporting on the video.

“I think that closing the school down yesterday was a good move to play it safe but I think today everybody—I think they are ready to go back, get back together as a community,” Sam Schroder, a student at the Washington rally, told Fox News.

A strong police presence was noted on campus.

“The threats, they have been horrible,” Grant Hillman, a Covington High School senior, told Fox. “I have never heard such cruel things wished upon another human being, ranging from getting locked inside a building and burned alive to sexually assaulted by the clergy members—it’s just awful.”

He added, “It’s really sad to see [people] with such a huge platform who [have] the ability to spread positivity to use it in such a negative manner to bully children.”

In an interview with NBC News, Covington Catholic High School student Nick Sandmann, who was seen smiling in the video after native American anti-President Donald Trump activist Nathan Phillips approached him and beat a drum inches from his face, said he wasn’t disrespectfully smirking at the activist, as many media outlets reported. He said he saw it as a firm resolve not to be provoked.

“I see it as a smile, saying that this is the best you’re going to get out of me,” he stated. “You won’t get any further reaction of aggression. And I’m willing to stand here as long as you want to hit this drum in my face.”

And throngs of people have judged him “based off one expression,” he added.

“I wasn’t smirking, but people have assumed that’s what I [was doing],” Sandmann said.