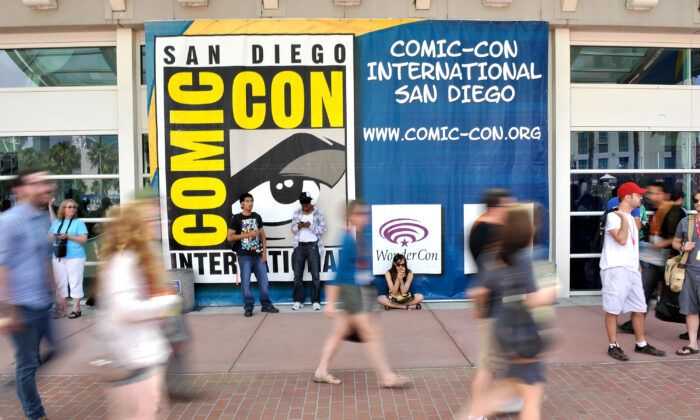 SAN DIEGO—For the first time since 2019, the San Diego Convention Center welcomed Comic-Con International back to its halls July 21, with Mayor Todd Gloria helping to kick off the event.

“Today marks the beginning of an iconic event that is eagerly anticipated every year, where fans and stars alike convene to share their love of comics, video games, movies, and pop culture,” Gloria said. “Comic-Con is the definition of big city energy, drawing tens of thousands of visitors from across the world.

“To San Diegans, this isn’t just some big, star-studded annual event; Comic-Con is part of the fabric of our city—and it helps us fund services like parks and libraries, street repair, and more,” he said.

The event came from humble origins, with just a few hundred fans in 1970. Since, it has attracted millions of comic book and pop culture fans from around the world; In 2019 alone, Comic-Con welcomed more than 135,000 attendees and generated $3.2 million in hotel and sales tax revenue for San Diego.

Since the COVID-19 pandemic hit, the largest comic book and popular arts convention in the world has been held virtually—excepting a far smaller, in-person three-day event held last November. Despite increasing virus numbers, it returns Thursday with an exhibit hall with over 460,000 square feet of floor space and more than 1,000 exhibitors.

“We welcome people from around the world to Downtown San Diego for Comic-Con International,” said San Diego City Councilman Stephen Whitburn, who represents downtown San Diego. “Attendees will get to see all that our great city has to offer, and they will spend millions of dollars while they are here, adding to our economic strength.

“Thank you to Comic-Con for its continued partnership with San Diego, and here’s to an exciting weekend,” he said.

Since its inception more than 50 decades ago, the convention has been housed in a variety of different venues including the U.S. Grant Hotel, El Cortez Hotel, San Diego’s Convention and Performing Arts Center, and the San Diego Convention Center.

“With excitement, events and an economic impact that extends many miles beyond the walls of the San Diego Convention Center, Comic-Con’s return is a moment for us all,” said Clifford “Rip” Rippetoe, president and CEO of the San Diego Convention Center. “For decades, Comic-Con has put San Diego on the international map, uniting comic book fans, cosplayers, and pop culture enthusiasts from fandoms around the world. It isn’t summer in San Diego without Comic-Con, and today—for the first time since 2019—summer truly returns.”

The Comic-Con programming schedule is available through the free Comic-Con app and will include live updates, a complete program schedule, an interactive map, special guest bios, and more.

San Diego’s Police and Fire-Rescue Departments have committed additional resources to ensure the safety of visitors both inside and outside of the Convention Center.

“The San Diego Police Department is excited to welcome Comic-Con guests back to our city,” Police Chief David Nisleit said. “Our teams have been working closely with Comic-Con International, the San Diego Convention Center, and our partner agencies to ensure everyone has a safe and enjoyable time. We want to remind everyone to be aware of their surroundings and to alert an officer or call 9-1-1 if they see something suspicious.”

“The San Diego Fire-Rescue Department is ready to see everyone once again at Comic-Con,” he said. “Our teams are fully staffed to respond to medical and fire-related emergencies, as well as ensure all restaurants, bars, and event spaces are abiding by capacity limits. We wish everyone a safe and fun Comic-Con.”