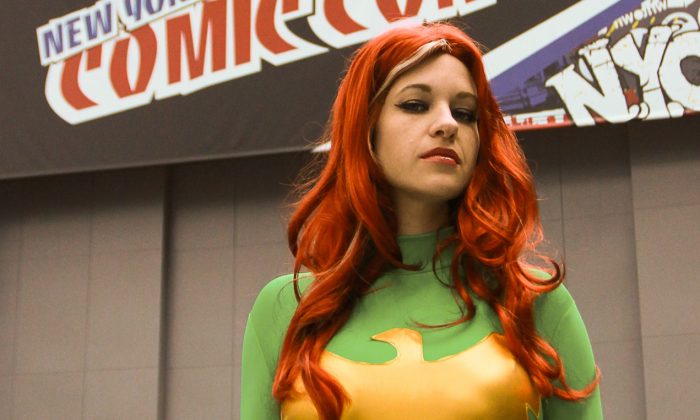 Nerds Out in Force at New York Comic Con

NEW YORK—There’s probably no better place to hold a pop culture convention than in Gotham City. The 2013 New York Comic Con wrapped up its four-day run at the Javits Center on Oct. 13. Huge crowds swarmed around their favorite celebrities, such as William Shatner, Sylvester Stallone, and Hulk Hogan.

The nerd gains more ground as the new cool—with films such as Superman’s “Man of Steel,” “The Avengers,” “Iron Man,” and “The Dark Night Rises” breaking box office records, and shows like “The Big Bang Theory” and “The Agents of S.H.I.E.L.D.” garnering huge TV ratings—and the New York Comic Con is proof.

“Pop culture is mainstream. We’re starting to see the geeks and the jocks level out, and the fandom has increased 10-fold in the last three years,” said Aub Driver, public relations and social media strategist for Dark Horse Comics. “New York Comic Con is great for connecting with our fans and to premiere our latest comics for the holidays.”

With over 150,000 fans in attendance this year, the New York Comic Con is the largest pop culture convention next to its sister convention in San Diego. Comic Con features heavyweight comic publisher Marvel, film and entertainment companies, gaming tournaments, rare collectible comics, and a healthy dose of cosplayers dressed up as their favorite heroes and villains.

“World domination is our plan,” said Thor Parker, the marketing the events coordinator for Midtown Comics. It’s the largest comic and pop culture retailer in the United States, with a large two-floor store in Times Square, New York.

“We’ve been here every year since the start, and being here for four days is better for us than our entire holiday season,” said Parker.

Anime and Japanese pop culture are also present at Comic Con with over a dozen dubbing companies and toy dealers, including FUNimation Entertainment, the largest anime dubbing company in the United States.

Adam Sheehan, senior marketing manager, said, “It’s a great chance to meet our casual fans and East Coast anime fans, and new ones as well who say, ‘Hey, I know you guys from Dragon Ball Z,’ and then I get to tell them about our 300 other shows!”

“We’re here with our flagships titles, Super Mario 3D World, Pokemon XY, giving out cat ears and holding gaming tournaments to bring our games to the masses and have fun. That’s what Comic Con is all about,” Rodriguez added.

Chevrolet showcased their latest models the Sonic, Camaro, 2014 Corvette Stingray, and “Adventure Time” vinyl-wrapped Spark. Why would a car company be at a comic convention? Steve Martin, product communications representative, said, “Chevrolet drivers have a lot of parallels with the comic fan base, so we wrap our cars with these comic properties and give one away over the course of the weekend.” Read comics, win cars, everybody wins.

The convention went from Oct 10 to 13. More info can be found here.

Unfortunately the popularity was so high that this year’s convention sold out months in advance, so when planning for next year, be sure to buy your tickets early.

And bring your inner nerd, because this is the place to let it shine.

Derek Padula is a professional nerd and was a consultant on the side of Goku in the Goku Vs. Superman debate. His books about Dragon Ball can be found at The Dao of Dragon Ball.