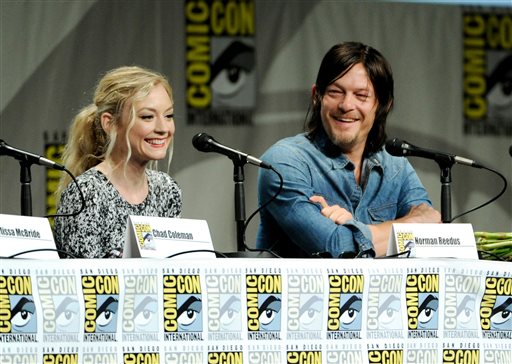 An article saying the Walking Dead has agreed to “bring Beth Greene back to life” is fake. Emily Kinney, left, and Norman Reedus attend "The Walking Dead" panel on Day 2 of Comic-Con International on Friday, July 25, 2014, in San Diego. (Chris Pizzello/Invision/AP)
Entertainment

Comic Con 2015 San Diego: Dates and Locations for All of Next Year’s Comic Cons

As the 2014 San Diego Comic-Con wraps up, people are looking for information about next year’s event, as well as all comic-cons in general.

There aren’t official dates for next year’s San Diego Comic-Con, but officials are indicating that the convention will start on July 8 and run through Sunday, July 12.

That’s much earlier than this year, which went from July 23 through July 27.

As for the other big Comic-Cons–the Phoenix Comicon has been set for May 28 through May 31 next year.

The dates for the Denver Comic Con hasn’t been set as of yet. It was July 13 through July 15 this year–if San Diego does move up to its indicated dates, than that may prompt a change from Denver, perhaps to later in July.

The Emerald City Comicon is slated for March 27 through March 29 at the Washington State Convention Center in Seattle.

SAN DIEGO—Several members of “The Avengers” descended on Comic-Con on Saturday to debut the first footage from the upcoming superhero sequel.

Chris Evans, Mark Ruffalo, Chris Hemsworth, Jeremy Renner and Robert Downey Jr. were on hand with other cast members from “The Avengers: Age of Ultron,” including Samuel L. Jackson and Cobie Smulders.

“It just keeps getting better,” Downey told the boisterous crowd of 6,500 assembled in the San Diego Convention Center. “I’m so excited we’re all here.”

The footage kicked off with the Marvel superhero team comically attempting to pick up Thor’s mighty hammer off a coffee table.

“If I lift it, do I get to rule Asgard?” Tony Stark wondered while trying to wield Thor’s hammer — both with and without one of his Iron Man gauntlets.

The teaser quickly launched into a barrage of action-packed imagery, including Hulk battling a giant robot resembling Iron Man and Thor grabbing Stark by the throat. The footage ended with a bleak scene of all the Avengers fallen with a haunting close up of Captain America’s shield split down the middle.

Jackson, who most recently starred in “Captain America: The Winter Soldier” with Evans, took a moment during the celebration to appreciate the fans.

The original “Avengers” cast was joined on stage inside Hall H by newcomers Elizabeth Olsen, Aaron Taylor-Johnson, Paul Bettany and James Spader, who personifies the villainous mechanical force Ultron in the sequel.

“I play an 8-foot robot in this movie,” Spader joked. “I’ve always played humans up until this point.”

In the trailer, Ultron takes a few different forms, from a wobbly ‘bot to slick metallic general. At one point, he tells the Avengers that he has no strings.

“Joss really gets these big, big, big ideas,” said Ruffalo backstage after the panel “There is a discussion that’s coming up about artificial intelligence and the ethics of artificial intelligence I think that’s dealt with in the movie. We’re kind of on the threshold of that — the movie ‘Her’ — all of this technology is just about ready to hit the world. But he’s also talking about our ability to destroy the world. And it’s a real thing. We’re there.”

The presentation ended with a brief appearance by Josh Brolin, who voices the alien baddie Thanos in both “Age of Ultron,” which is set for release May 1, 2015, as well as “Guardians of the Galaxy,” the cosmic Marvel romp that comes out Friday. Brolin came on stage wearing a foam Infinity Gauntlet, the powerful artifact depicted in Marvel lore.