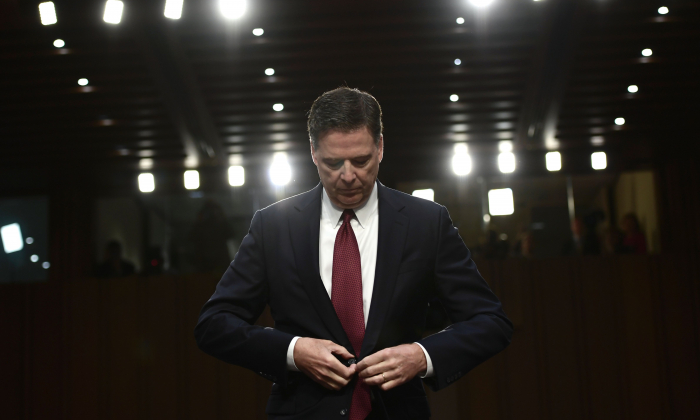 Former FBI Director James Comey has become a center of attention for the memos he made of private conversations he had with President Donald Trump. In handling those memos, Comey chose not to follow FBI protocol, which has damaged their value as evidence while perhaps reducing any penalty for disclosing them.

Comey’s failure to follow protocol became a topic of Attorney General Jeff Sessions’s testimony before the Senate intelligence committee on June 13, regarding Comey’s account of a meeting between him and Trump on Feb. 14. At that meeting, Comey claims Trump expressed his hope that former national security adviser Gen. Michael Flynn could be “let go.” Flynn is currently under investigation by the FBI.

Both the president and his lawyer have strongly denied that Trump asked in any form for Comey to let Flynn go.

Comey, in his June 8 testimony before the Senate intelligence committee, alleged he had informed Sessions of Trump’s request at a meeting the day after he met with Trump.

In response to questioning from Sen. Roy Blunt (R-Mo.), Sessions said Comey did not inform him at that meeting of any inappropriate requests made by the president.

He mentioned no facts of any kind. He did not mention to me that he had been asked to do something he thought was improper.
— Attorny General Jeff Sessions

“He mentioned no facts of any kind. He did not mention to me that he had been asked to do something he thought was improper,” Sessions said when asked by Blunt whether Comey had brought up the alleged Flynn conversation when they met.

If Comey had thought something was improper, the normal protocol would have been for him to report the issue to his supervisor, the deputy attorney general. But Comey did not follow protocol, which Sessions said he “certainly knew.”

Sessions said that according to “longstanding written policies of the Department of Justice,” if Comey were in a one-on-one conversation with Trump and the conversation moved into “certain areas,” then it would be the “duty of the FBI agent to say, ‘Mr. President, I can’t talk about that.'”

Instead of following protocol, Comey testified that he began recording his conversations with Trump in memorandums, starting with their Jan. 6 meeting, during which Comey briefed Trump on the “dossier” of uncorroborated accusations that had been given to the FBI.

It does not appear Comey’s memos were filed with the FBI as official documents. Instead, Comey provided the information in them to a small circle of his associates, and someone later leaked a recollection of Comey’s meetings with Trump to the media.

Fox News has identified 10 New York Times stories dating back to Jan. 10 that are sourced to anonymous FBI or Department of Justice officials “that either paint Comey in a positive light or push a message he was unable to personally disclose,” according to Fox.

In his June 8 testimony to the Senate intelligence committee, Comey admitted that through a friend, he himself leaked a memo of his Feb. 14 meeting with Trump, during which Comey alleges Trump expressed his hope that Flynn could be let go.

Comey seems to have been selective about to whom he provided the memos.

While he has not provided them to the House and Senate committees leading the Russia investigations, Comey or one of his associates has provided them to The New York Times—known for its strong anti-Trump bias—and Comey has given them to special counsel Robert Mueller, his long-time friend.

According to Marc Ruskin, a former FBI agent for 27 years and author of “The Pretender: My Life Undercover for the FBI,” a crucial piece of information is whether Comey followed protocol with his memos.

Under normal protocol, if an FBI agent is asked to do something that’s potentially unethical or illegal, Ruskin said, “the agent would normally write a memo documenting this situation.” The agent would then show the memo to their supervisor and consult on what would be the proper response. Then, if no further action was needed, an official would sign off on the memo, which would then be entered into an official file.

If this were the case, the memos would have been time-stamped and more official, but it would also have meant Comey admitting to leaking government documents that potentially contained classified information.

On the other hand, if Comey did not follow protocol, Ruskin said it’s less of a problem that Comey leaked the memos, but the memos would also lack any probative value—they could not be used to prove anything. And lacking any official date, it would even be difficult for Comey to prove he didn’t write them on the spot.

“They don’t corroborate anything if they weren’t submitted for filing,” Ruskin said.

Regardless, Ruskin noted it’s problematic for an FBI director to leak documents to the press.

Comey told the committee that he leaked the memo about the Feb. 14 meeting with the intention of having a special counsel assigned to the Russia investigation. Ruskin said, “There are other ways he could have gone about it that would have made more sense.”

“To me it sounded like something you’d come up with after the fact,” he said, referring to Comey’s claim he leaked the memos to get a special prosecutor assigned. Ruskin said it sounded similar to something that would come out of a meeting with a lawyer trying to create an alibi, “and that was the best they could come up with.”