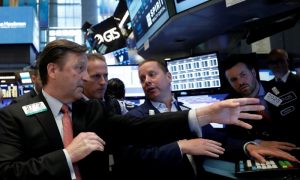 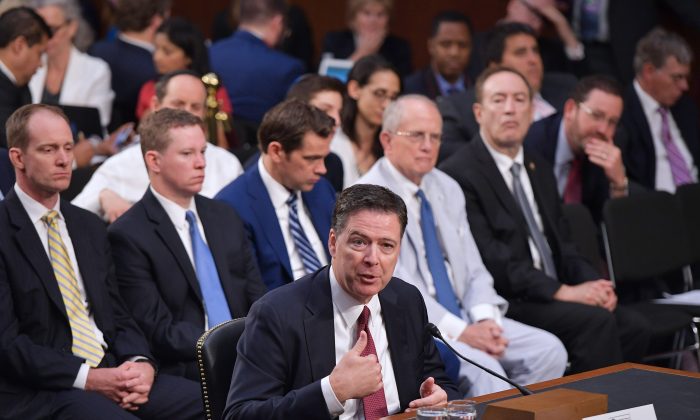 Former FBI Director James Comey admitted in a June 8 hearing that he leaked internal memos through a friend to The New York Times in hopes of spurring calls for the appointment of a special counsel, but President Donald Trump’s lawyer said the chronology shows this could not have been the case. Ironically, Comey chose to leak to the Times in spite of knowing the paper’s reporting on the Russia collusion investigation had been badly flawed.

The leaked memos were selectively quoted by The New York Times to portray Trump as having asked Comey to “shut down the federal investigation” into former national security adviser Michael T. Flynn.

By admitting that he was behind the leak, which might have contained classified information, Comey may have incriminated himself.

“I asked a friend of mine to share the content of the memo with a reporter,” Comey said under oath. He said he leaked the memo because “I thought that might prompt the appointment of a special counsel” to take over the Russia investigations.

Comey claimed he leaked the memo only in response to a May 12 Tweet from Trump that said “James Comey better hope that there are no ‘tapes’ of our conversations before he starts leaking to the press!”

Trump’s tweet, however, came after The New York Times published an article on May 11 that cited parts of a conversation between Trump and Comey on Jan. 27 that Comey had written a memo on. Comey wrote in the memo that Trump had said “I need loyalty,” something Trump and his lawyer have both denied.

At the press conference Kasowitz said: “The public record reveals that The New York Times was quoting from the memos the day before the referenced Tweet. Which belies Mr. Comey’s excuse for this unauthorized disclosure of privileged information and appears to be entirely retaliatory.”

The Times article in question only had a few short quotes from the memo. It is possible the Times was given knowledge of the memo’s contents, but the memo itself had not yet been leaked to it.

In addition to identifying himself as a source of leaked information, Comey may have also revealed other individuals behind the stream of media leaks coming out of the Russia investigation.

In its May 11 story, The New York Times identified its sources as “several people close to him,” who were asked to “not discuss it publicly while he was F.B.I. director.” It notes that after Comey was fired, “they felt free to discuss it on the condition of anonymity.”

During his testimony, Comey identified the “several people close to him,” whom he shared his conversations with, relating to his discussions with Trump in the memos, while responding to questions from Sen. Marco Rubio (R-FL).

The only people he relayed them to were senior leaders at the FBI, whom he listed as the FBI “deputy director, my chief of staff, general counsel, deputy director’s chief counsel, and then—more often than not—the number three person at the FBI, the associate deputy director. And quite often, head of the national security branch.”

Comey acknowledged in his testimony that some of the memos he had written contained classified information. It is unclear whether the memos he leaked to the media were classified, and why Comey still had access to the memos written in his capacity as the director of the FBI after leaving office.

Comey: Trump Asked for Loyalty, Did Not Obstruct

“We will leave it to the appropriate authorities to determine whether these leaks should be investigated along with all the others that are being investigated,” said Kasowitz.

Meanwhile, Comey provided the leaked memos to The New York Times, while knowing—as he stated on record—that the news outlet had written false reports on the Russia investigations.

Comey discredited a Feb. 15 front page story in The New York Times, which claimed Donald Trump and members of his 2016 presidential campaign “had repeated contacts with senior Russian intelligence officials in the year before the election.”

At the time, The Epoch Times noted many flaws in the report, which The New York Times used to push a narrative of collusion. Trump also addressed claims in the report during a Feb 16 press conference, stating “I don’t mind bad stories. I can handle a bad story better than anybody—as long as it’s true. I’m not OK when it is fake.”

Sen. Tom Cotton (R-AR) pressed Comey further on the piece from The New York Times, asking “would it be fair to characterize that story as almost entirely wrong,” to which Comey replied, “Yes.”

Comey went on to discredit many other media reports, which have frequently cited unnamed intelligence and government sources to push their narrative that the Trump campaign colluded with Russia to influence the election.

‘All of you know this. Maybe the American people don’t,” Comey said, addressing the Senate committee. He said when it comes to reporters writing stories about classified information, “the people talking about it often don’t really know what’s going on.”

He said there have been many stories about the Russia investigations “that are dead wrong.”