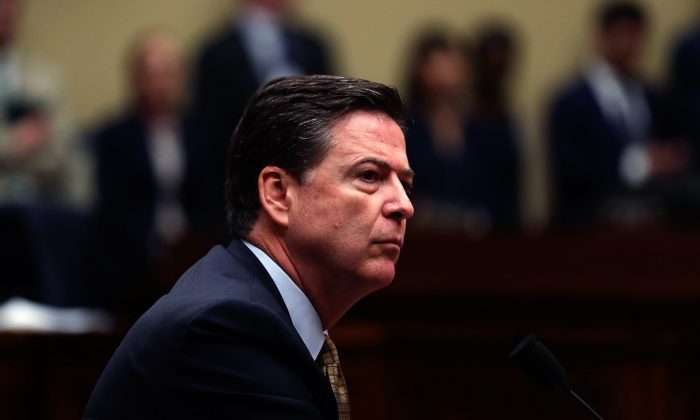 FBI Director James Comey testifies during a hearing before House Oversight and Government Reform Committee July 7, 2016 on Capitol Hill in Washington. The committee held a hearing 'Oversight of the State Department,' focusing on the FBI's recommendation not to prosecute Democratic presidential candidate Hillary Clinton for maintaining a private email server during her time as Secretary of State. (Alex Wong/Getty Images)
US

Former FBI Director James Comey said that he plans to fight a congressional order calling on him to appear for a deposition.

House Judiciary Committee Chairman Rep. Bob Goodlatte (R-Va.) issued subpoenas on Nov. 22 to Comey and former Attorney General Loretta Lynch, according to documents published by reporters from CNN and Politico. The subpoenas call on Comey and Lynch to appear for closed-door depositions on Dec. 3 and Dec. 4, respectively.

Comey confirmed receiving a subpoena in a Twitter post, adding that he “will resist” the congressional order. Comey’s attorney said in a statement that the subpoena “represents an abuse of process” that the former FBI director will resist in court.

“Happy Thanksgiving. Got a subpoena from House Republicans. I’m still happy to sit in the light and answer all questions. But I will resist a ‘closed door’ thing because I’ve seen enough of their selective leaking and distortion. Let’s have a hearing and invite everyone to see,” Comey wrote.

Happy Thanksgiving. Got a subpoena from House Republicans. I’m still happy to sit in the light and answer all questions. But I will resist a “closed door” thing because I’ve seen enough of their selective leaking and distortion. Let’s have a hearing and invite everyone to see.

Comey had previously indicated that he would only appear to answer questions in a public hearing. The last time he appeared for public testimony, Comey used the public setting as justification for refusing to answer almost 100 questions, according to Rep. Trey Gowdy (R-S.C.).

“So why in the world would he want to go back to a setting where he knows he can’t answer all the questions,” Gowdy told Fox News on Nov. 19.

Gowdy, a former federal prosecutor, explained that key witnesses—such as Comey and Lynch—are usually interviewed at the end of an investigation.

“We’re at the end,” Gowdy said. “We’ve interviewed a lot of witnesses between House intel and judiciary, and it’s time to bring in Comey and Lynch.”

Comey’s attorney, David Kelley, said his client prefers a public setting because the investigation by the two committees resulted in a number of leaks to the media. Kelley alleged that the leaks were selective, with a goal to “fit and promote the committee’s false narrative.”

“While the authority for congressional subpoenas is broad, it does not cover the right to misuse closed hearings as a political stunt to promote political as opposed to legislative agendas,” Kelley said.

The joint investigation was subject to a number of leaks from anonymous sources, but it isn’t known who was behind the disclosures. Since most of the leaks exposed questionable conduct by Obama administration officials, there is reason to suspect Republicans. But Democrats could benefit from the leaks as well, since revealing key confidential documents and testimony can help witnesses align their stories.

Republicans on the House Judiciary and Oversight committees are investigating actions taken by the FBI and the Justice Department (DOJ) during the 2016 election. Comey and Lynch headed those entities at the time.

The full scope of the House investigation isn’t known, but the two committees have been following leads from an earlier probe led by the chair of the House Intelligence Committee, Rep. Devin Nunes (R-Calif.).

The intelligence committee discovered, among other facts, that the Clinton campaign and the DNC paid for an opposition research dossier on then-candidate Donald Trump. The FBI and DOJ then used the dossier, without disclosing the financiers of the research, to obtain a Foreign Intelligence Surveillance Act (FISA) warrant to spy on at least one Trump-campaign associate. Special counsel Robert Mueller took over the FBI investigation in May of last year.

Comey signed the original FISA application to surveil former Trump campaign volunteer Carter Page in October 2016, and two renewal applications in January and April 2017. The FBI described Page, a U.S. citizen, as a Russian agent in the documents. Page was never charged with a crime and vehemently denies that he is a Russian agent.

Trump fired Comey in May last year. After the firing, Comey admitted that he leaked several memos to a friend with the intention of them reaching the media. At least one of the memos contained classified information, according to Sen. Chuck Grassley (R-Iowa).

Both Comey and Lynch were referred for criminal investigation by a group of Republican lawmakers in April.