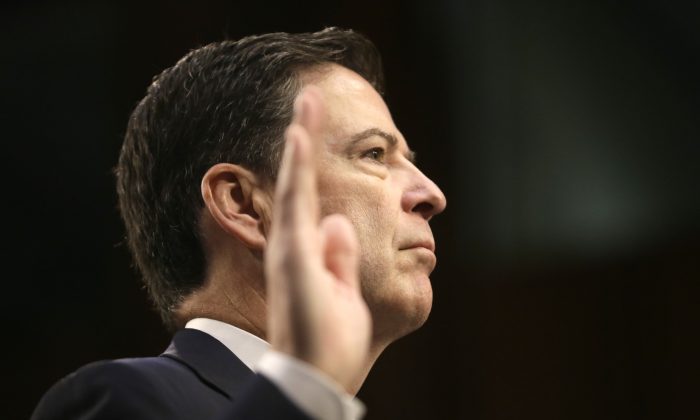 Former FBI Director James Comey is sworn in before testifying before a Senate Intelligence Committee hearing on Russia's alleged interference in the 2016 presidential election on Capitol Hill in Washington on June 8, 2017. (REUTERS/Jim Bourg)
Politics

A recent finding that former FBI Director James Comey began drafting a letter to exonerate Hillary Clinton of charges before she was interviewed by the FBI runs counter to statements Comey made under oath in September 2016.

Comey claimed that he made his decision to not recommend charges against Clinton only after she had been interviewed by the FBI in July 2016, but new evidence released by the Senate judiciary committee suggests otherwise.

“Comey began drafting a statement to announce the conclusion of the Clinton email investigation in April or May of 2016, before the FBI interviewed up to 17 key witnesses including former Secretary Clinton and several of her closest aides,” states an Aug. 31 press release announcing the finding by committee chairman Sen. Chuck Grassley (R-Iowa) and Sen. Lindsey Graham (R-S.C.), chairman of the Subcommittee on Crime and Terrorism.

Contrary to the recent finding, Comey told the House judiciary committee under oath on Sept. 28, 2016, that it was only after Clinton was interviewed by the FBI on July 2, 2016, that he made his decision to not recommend charges.

He was pressed on this issue by Rep. John Ratcliffe (R-Texas), who asked specifically whether Comey made his decision to not recommend charges before or after the Clinton interview.

Comey then explained in more detail, stating, “All I can do is tell you again, the decision was made after that, because I didn’t know what was going to happen during that interview.”

Clinton came under investigation for her use of a private email server while serving as secretary of state, in connection with the 2012 Benghazi attacks. This turned into a larger scandal after Clinton deleted 33,000 emails before handing over the files. Her staff also destroyed data, phones, and laptops requested for the investigations.

The latest finding is rooted in a separate investigation from the Office of Special Counsel (OSC). At the request of Democrats in Congress last fall, OSC looked into whether Comey violated the Hatch Act, which prevents government employees from using their positions to influence an election. Comey had reopened the FBI investigation into Clinton just ahead of Election Day in 2016.

OSC closed its investigation after President Donald Trump fired Comey in May, but not before it interviewed two FBI officials close to Comey. These were James Rybicki, Comey’s chief of staff, and Trisha Anderson, the principal deputy general counsel of national security and cyberlaw.

Transcripts from the two interviews are now pieces of evidence in an investigation by the Senate judiciary committee into meddling in the 2016 elections.

“Both transcripts are heavily redacted without explanation,” states the Aug. 31 press release by Grassley and Graham.

Yet the limited available information reveals that Comey’s investigation into Clinton could have been little more than a show.

Trump pointed to the issue on Sept. 1, stating on Twitter, “Wow, looks like James Comey exonerated Hillary Clinton long before the investigation was over … and so much more. A rigged system!”

The latest finding also shows Comey drafted his statement before the FBI gave immunity agreements to Clinton aides Cheryl Mills and Heather Samuelson. The press release notes that the FBI’s agreement with Mills and Samuelson was that after a “very limited review of Secretary Clinton’s emails,” they would destroy their laptops, which were evidence in the case.

During the July 2, 2016, hearing, Rep. Ratcliffe had also pressed Comey on the decision to allow Mills and Samuelson to be present at Clinton’s hearing, despite being key witnesses in the case—a situation Ratcliffe noted is unheard of in normal investigation.

“To me, the only way that an interview takes place with the two central witnesses and the subject of the investigation, is if the decision has already been made that all three people in that room are not going to be charged,” Ratcliffe said at the hearing.

Ratcliffe also noted the large amount of evidence that was lost or destroyed during the investigation into Clinton—which he said should have been grounds to prosecute Clinton for obstruction of justice.

He read details on this from one of the FBI’s own reports, noting that the FBI wasn’t able to get access to the personal Apple server used for Clinton’s work emails, and that an Apple Macbook and a thumb drive containing Clinton’s email archives were lost. Two BlackBerry devices were given to the FBI without SD or SIM cards.

Another 13 of Clinton’s mobile devices, he said, were “lost, discarded, or destroyed with a hammer.”

Server backups were deleted, he said, and after the State Department and Rep. Trey Gowdy (R-S.C.) told Clinton they were seeking laptops of Clinton associates Mills and Samuelson, the laptops were “wiped clean with BleachBit,” a tool to erase data from computers.

After the emails were subpoenaed, Clinton’s email archive was also permanently deleted from its network and wiped with BleachBit. Then, after another subpoena, Clinton’s server backups were manually deleted.

Comey responded to his decision to overlook the missing and destroyed data, stating, “We’re in a fact-based world,” and that he can only “make assessments based on evidence we’re able to gather.”

Following the latest findings, Grassley and Graham are now requesting all drafts of Comey’s statement, which he used to close the Clinton investigation, as well as all emails and records that were previously provided to the OSC.

The senators state in an Aug. 30 open letter that according to transcripts they received, “in April or early May of 2016, Mr. Comey had already decided he would issue a statement exonerating Secretary Clinton.”

“That was long before FBI agents finished their work. Mr. Comey even circulated an early draft statement to select members of senior FBI leadership,” the letter states. “The outcome of an investigation should not be prejudged while FBI agents are still hard at work trying to gather the facts.”