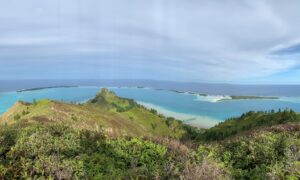 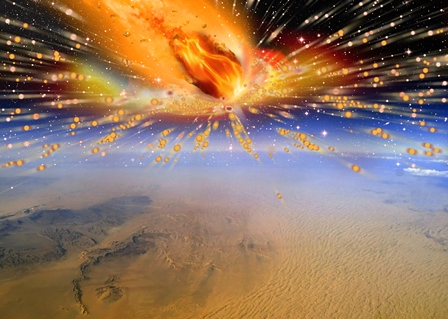 Researchers have found two different pieces of comet strike evidence that backs up the theory that a comet exploded above Egypt about 28 million years ago. An artist’s rendition depicts the explosion. (Terry Bakker)
Science

A comet strike hit the Earth long ago, and evidence has been discovered in Tutankhamun’s brooch by African and international researchers.

The comet entered Earth’s atmosphere above Egypt about 28 million years ago and exploded, “raining down a shock wave of fire which obliterated every life form in its path,” according to the researchers.

The explosion heated the sand beneath it to about 3632 Fahrenheit, resulting in the formation of yellow silica glass. The glass is scattered over an approximately 3728 mile area in the Sahara desert.

A specimen of the glass is found in Tutankhamun’s brooch, a yellow scarab at the center.

“Comets always visit our skies – they’re these dirty snowballs of ice mixed with dust – but never before in history has material from a comet ever been found on Earth,” says Professor David Block of Wits University in the announcement.

The research was published in Earth and Planetary Science Letters and presented in public on Thursday at the University of the Witwatersrand, Johannesburg.

Another form of evidence was a mysterious black pebble dubbed “Hypatia” that was found by an Egyptian geologist in the Sahara. After chemical analysis on the pebble, the researchers concluded that it is the first known evidence of a comet nucleus.

“We propose that the Hypatia stone is a remnant of a cometary nucleus fragment that impacted after incorporating gases from the atmosphere,” the researchers write in the introduction to the published findings. “Its co-occurrence with Libyan Desert Glass suggests that this fragment could have been part of a bolide that broke up and exploded in the airburst that formed the Glass. Its extraordinary preservation would be due to its shock-transformation into a weathering-resistant assemblage.”

The discovery was one of profound joy for the researchers.

“It’s a typical scientific euphoria when you eliminate all other options and come to the realization of what it must be,” professor Jan Kramers of the University of Johannesburg, lead author of the study, said.

“Comets contain the very secrets to unlocking the formation of our solar system and this discovery gives us an unprecedented opportunity to study comet material first hand,” said Block.

The gigantic impact of the explosion also produced microscopic diamonds.

The discoveries point to a new way of finding comet material.

The study has come international. For instance, Dr. Mario di Martino of Turin’s Astrophysical Observatory has led several expeditions to the area where the desert glass is found.

Dr Marco Andreoli of the South African Nuclear Energy Corporation and Chris Harris of the University of Cape Town were also involved, along with other researchers.