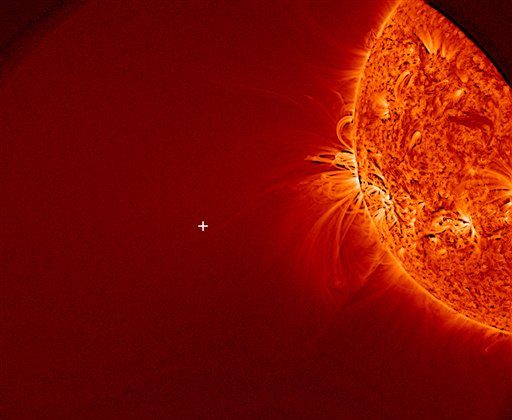 This image provided by NASA and taken by NASA's Solar Dynamics Observatory on Nov. 28, 2013, shows the sun, but no sign of comet ISON. During a meeting of the American Geophysical Union meeting on Tuesday, Dec. 10, 2013, scientists said the comet broke apart on Thanksgiving after coming close to the sun. (AP Photo/NASA)
Science

After days of speculation about whether the comet had survived its encounter with the sun, multiple researchers now say that the comet didn’t survive.

If anything did survive, it’s small chunks of ice that broke off from the comet, but none of those have been found yet, according to NASA, which has remained silent about the comet since announcing it would monitor for these chunks soon after ISON’s presumed death.

He said ISON (EYE’-sahn) was stretched and pulled by the sun’s powerful gravity. It was also hit with solar radiation. And the icy snowball just fell apart.

“At this point it seems like there is nothing left,” Battams said at the American Geophysical Union conference in San Francisco. “Sorry, everyone, Comet ISON is dead. But its memory will live on.”

The comet excited astronomers and the media as it zipped within 730,000 miles of the sun on Thanksgiving Day. Astronomers who had followed the ice ball mourned the loss of the sky show that once promised to light up during December.

Astronomers had hoped it would survive because some — but not most — comets make it past close approaches with the sun. Last year, Comet Lovejoy did.

Had ISON survived it would have provided good naked-eye viewing in early December for the Northern Hemisphere, astronomers said. NASA had aimed several telescopes and spacecraft at the comet to watch its close brush with the sun, only to find it missing after the encounter.

Comets are balls of dust and ice from the formation of the solar system billions of years ago. ISON was on its first trip after leaving the Oort cloud on the distant fringes of the solar system. Unlike comets that are “hardened” by several trips around the sun, ISON just couldn’t survive its maiden voyage, Battams said.

ISON, about half a mile wide, was tiny and probably smaller than originally estimated, Battams said.

As the comet neared its closest approach to the sun, astronomers had a sense of loss. Battams called watching it in those final hours “a process of heartbreak.”

The comet briefly appeared to brighten after moving past the sun, raising hopes that it had survived and would deliver the anticipated viewing.

But scientists, after analyzing videos from satellites, have a theory about why that happened, reported Scientific American. “One possible explanation is that fragmentation occurred before the nucleus reached perihelion,” said Geraint Jones of University College London.

According to Scientific American, “If it broke up early, its pieces would have spread out because of the tidal forces near the sun: the closer pieces would be pulled more strongly by gravity, luring them farther in, whereas the pieces on the back side of the clump would lag due to a lessened gravitational pull.

“Coming out the other side of the sun, the same process would happen in reverse. When the cloud briefly coalesced again, the clump might have appeared to rebrighten before dimming out again.”

Battams said that Livejoy, which survived a pass by the sun that was closer than ISON’s, said that Lovejoy wasn’t an Oort Cloud Comet.

“It had been past the sun at least a couple times. It had perhaps built up a thick skin. Maybe that’s a factor.”

Scientists are looking forward to another comet called Sliding spring that is due to arrive in the inner solar system in 2014, and is slated to fly close to Mars, giving researchers a chance to get a higher-resolution image of the comet from a camera there.

“This will be our first resolved image of a long-period comet,” said Alfred McEwen of the University of Arizona in Tucson, principal investigator for the HiRISE (High-Resolution Imaging Science Experiment) camera on NASA’s Mars Reconnaissance Orbiter. “This will help answer important questions about how long-period comets differ form short-period comets. So stay tuned for that next year.”