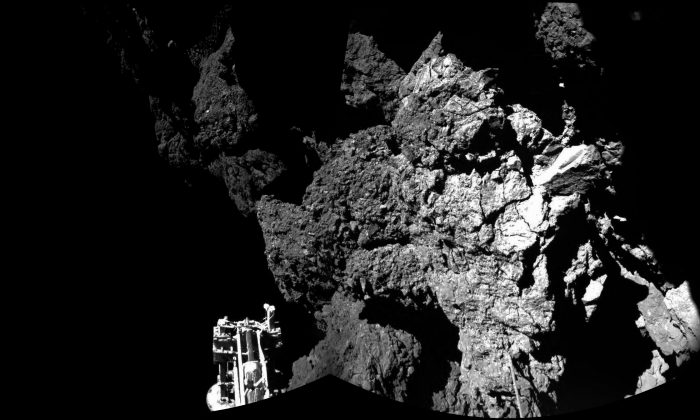 In this file photo dated Thursday Nov. 13, 2014, a combination photo produced with different images taken with the CIVA camera system released by the European Space Agency ESA, shows Rosettas lander Philae after landing safely on the surface of Comet 67P/Churyumov-Gerasimenko, as these first CIVA images confirm. One of the landers three feet can be seen in the foreground. Philae became the first spacecraft to land on a comet when it touched down Wednesday on the comet, 67P/Churyumov-Gerasimenko. (AP Photo/Esa/Rosetta/Philae, FILE)
Science

The Rosetta probe has captured new color pictures of the Comet 67P, also known as the Churymov-Gerasimenko.

The comet came into focus when the Rosetta mission was launched. The mission is to follow the comet as it orbits the sun every 6.6 years under Jupiter’s gravity.

“When Rosetta arrives at the comet it will be at a distance of about three Astronomical Units (450 million km) from the Sun. As it moves towards the Sun, the ice in the nucleus begins to sublimate and the comet begins to eject increasing amounts of dust,” the European Space Agency explained in a blog post.

Numerous pictures have been published of the comet before, but not until now have any color images–and from so close–become available.

The human team on the ground monitoring Rosetta used three images taken of the comet one after another and superposed them through filters centered on red, green, and blue wavelengths.

The color image shows how the comet, which is about 2.4 miles (4 kilometers) in diameter, would be seen by the human eye.

“As anticipated, the comet turns out to be very grey indeed, with only slight, subtle color variations seen across its surface,” the agency said.

“Painstaking work is needed to superimpose the images accurately, which is one reason it has taken so long to come up with the first meaningful color image of 67P/C-G.”

“As it turns out, 67P/C-G looks dark grey, in reality almost as black as coal,” said the instrument’s Principal Investigator Holger Sierks from the Max Planck Institute for Solar System Research.

“Long before Rosetta’s arrival at the comet, ground-based telescope observations had shown 67P/C-G to be grey on average, but it was not possible to resolve the comet and see any surface details. However, now that OSIRIS is able to take images from close-up, scientists are surprised to see an extremely homogeneously coloured body even on a detailed scale, pointing at little or no compositional variation on the comet’s surface,” the agency added.

“For example, any ice on the surface should appear brighter in the blue filter, leading to the appearance of blue-ish patches. This image contains no indication of any such icy patches, consistent with observations made by some of Rosetta’s instruments.”

The overall color from the images, which were taken from a distance of 74.5 miles (120 kilometers) from the comet, indicates the comet is covered with a dark dust.

The agency is planning to use other combinations of the 25 filters available to them and look for different minerals on the comet, including minerals containing water, as well as various gas species in the area surrounding the nucleus.