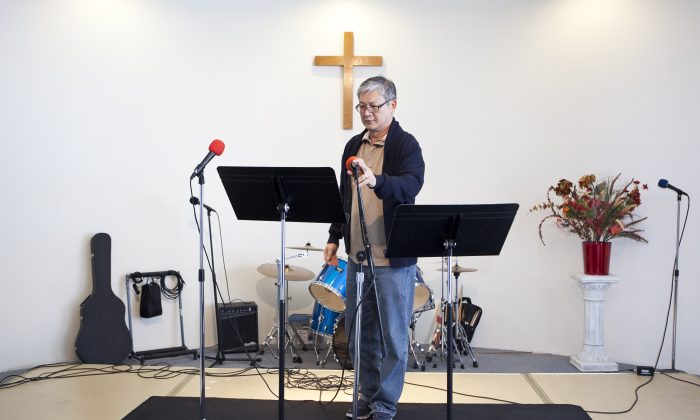 Jason Quah, the pastor at Bethel Chinese Assembly of God in Lower Manhattan, said the church had received a number of calls from people wanting to enroll in health plans, but he did not know why his church was listed on the New York State of Health website as an assistance site, New York, Oct. 30, 2013. (Samira Bouaou/Epoch Times)
New York

NEW YORK—Dozens of businesses listed as providers of in-person assistants to enroll people in health plans on the New York State of Health website, have said they do not know about insurance or how they got on the website.

The State Health Department’s Health Benefit Exchange has awarded nearly $27 million in grants to 50 community-based organizations and 96 subcontractors to help enroll people in health plans with in-person assistants or navigators.

A closer investigation showed that the businesses on the website are all listed without their consent as enrollment sites under one subcontractor, Harlem United CAC.

The lead agency, APICHA Community Health Center, who subcontracted Harlem United CAC, declined to comment about the listings on the New York State of Health website.

The assistant of the APICHA Community Health Center CEO Therese Rodriguez, told the Epoch Times the Department of Health (DOH) had instructed them to direct all media inquiries to DOH spokesperson Bill Schwarz.

Schwarz said the lead agencies and subcontractors had not been awarded contracts based on the locations where they could help people enroll in health plans, so the DOH would not be investigating the subcontractors for fraud.

He said the confusion had come about because some agencies had given the DOH addresses for potentially good places to meet to enroll people using their laptops, but in some cases had not asked the businesses for their approval.

Schwarz said the idea was that people could potentially enroll at cupcake stores, or while waiting to get their hair done. Some of the businesses listed on the website also included mechanics, and car service agencies.

“I don’t know exactly how it was communicated to the navigator organizations in terms of notification,” Schwarz said.

He said the DOH was going through the entire list on the website to make sure that the locations provided by the subcontracted agencies were in fact good locations to meet with an in-person enrollment assistant.

In the meantime, many businesses are still listed in error on the New York State of Health website.

Six businesses listed by the Harlem United CAC subcontractor as providing assistance in Lower Manhattan in Cantonese and Chinese, were confused about why they had been listed on the website.

The receptionist at Sa Sa Cosmetic & Skincare Spa on East Broadway could not speak English, but said that they were not helping enroll people in Obamacare health plans.

“We do makeup here. We have nothing to do with insurance. You must have called the wrong number,” the receptionist said in Mandarin.

Beauty and Styling House manager Johnie Tant said that he could speak Mandarin and Cantonese, but could not help people with health insurance.

“No, this is a beauty salon. I think that they have made a mistake. How can we help people for health plans with no knowledge of the health plan?” he said.

Yun Poon, the supervising pharmacist at Mannings Pharmacy Corp, said her store was definitely not participating in the navigator program, but had been helping people with Medicaid Part D applications for many years.

Jason Quah, the pastor at the Bethel Chinese Assembly of God church in Eldridge Street said he received around a dozen phone calls from people wanting help to enroll in health plans. Some of them had been referred to his church by local politicians, but his church is also not a navigator.

“One lady said she wanted to report me to the government. I told her to go ahead,” he said. “We are a church and we don’t know anything about Obamacare.”

Phoebe Kwok, a staff member at JJ Crystal Skin Care, said they did not help people enroll in health plans, and had no navigator in the store. She said the other staff members could not speak English.

In Brooklyn, several businesses listed in error as navigators on the health exchange website with the Brooklyn Hispanic Chamber of Commerce and the Brooklyn Perinatal Network also reported receiving phone calls about health plans.

Brooklyn Cupcake in Williamsburg, Apex Car & Limo, and Zambrand Auto Repair in Sunset Park were also among the businesses listed on the website without their consent.

Sarah Matheson
Follow
Sarah Matheson covers the business of luxury for Epoch Times. Sarah has worked for media organizations in New Zealand, Australia, and the United States. She has a Bachelor of Arts in Anthropology, and graduated with merit from the Aoraki Polytechnic School of Journalism in 2005. Sarah is almost fluent in Mandarin Chinese. Originally from New Zealand, she now lives next to the Highline in Manhattan's most up-and-coming neighborhood, West Chelsea.