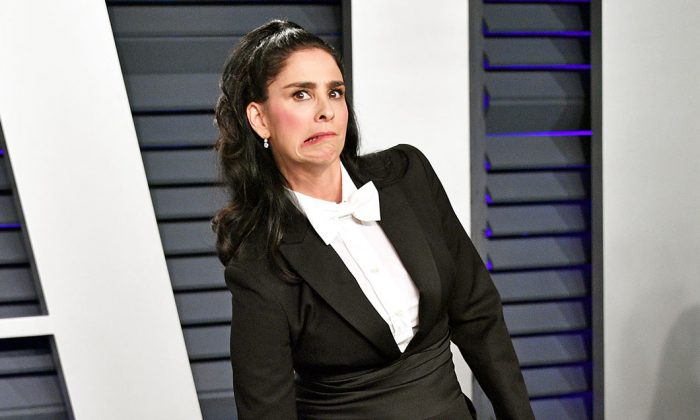 A famous American sitcom star was once terminated from a movie production after executives saw a photo of her donning a black face, she revealed in an interview broadcast on August 9.

Film production crew members were not amused when they saw a still image of comedian Sarah Silverman with black paint on her face for a controversial 2007 sketch about race in her Sarah Silverman Program.

Left-wing Hollywood activist Sarah Silverman revealed producers fired her from a movie she was set to co-star in after discovering a photo of her in blackface. https://t.co/tC9palq99Q

Silverman, 48, revealed she was fired the night before filming began. She was to play a small part in a movie.

“I recently was going to do two days on a movie, a really sweet part in a cool little movie and then at 11 p.m. the night before they fired me because they saw a picture of me in blackface from that episode,” she said in a recorded interview for The Bill Simmons Podcast.

She claimed having already explained her actions in a 2018 episode of her show.

“It was not because anyone saw it, I exposed myself but listen, I am not that person anymore,” Silverman said. “I did not go to an [expletive] episode of Halloween in the ’80s in blackface; I was doing an episode about race.”

She also explained her sketch did not actually reflect her personal views about race.

“[In] the first whole part of my stand up … I said the opposite of what I really felt,” Silverman said. “I was in character.”

Silverman was disappointed to see her replacement was someone whose work was less controversial.

“I didn’t fight it … I understand it is never okay and blah, blah, blah but you know,” she said, claiming she has already stopped performing that sort of comedy. “They hired someone else who is wonderful but who has never stuck their neck out. It was so disheartening, it just made me real, real sad, because I have really kind of devoted my life to making it right.”

A 2007 episode of Sarah Silverman’s Comedy Central show featuring her in blackface recently cost her a job. https://t.co/aKPCElB2je

Fox News reports the comedian blamed her termination on a growing “canceled culture” where actors can miss out on new work opportunities because of past work viewed as being too controversial by modern standards.

“I think it’s really scary … it’s like if you’re not on board if you say the wrong thing if you had a tweet once … everyone is, like, throwing the first stone. It’s so odd,” Silverman said. “I see it as a perversion really, it’s really, ‘Look how righteous I am, and now I’m going to press refresh all day long to see how many likes I get in my righteousness.”

“Sarah Silverman reveals she was once fired for wearing ‘blackface’ on old TV show” via FOX NEWS https://t.co/r97CZ9qkS6 pic.twitter.com/qLDFnybzPa

She admits she often reviews her previous work and does not find a lot of her work funny anymore.

“’Wow, look at this back then. That was so [expletive] looking at it in the light of today of what we know,'” she said. “I have always said that if I don’t look back at my old stuff and cringe, there is something wrong.”

Silverman admits her blackface sketch was not her best work and hopes she can make amends with her fans in the future.

“I can’t erase that I did that, but I can only be changed forever and do what I can to make it right for the rest of my life,” she said.