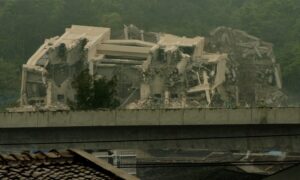 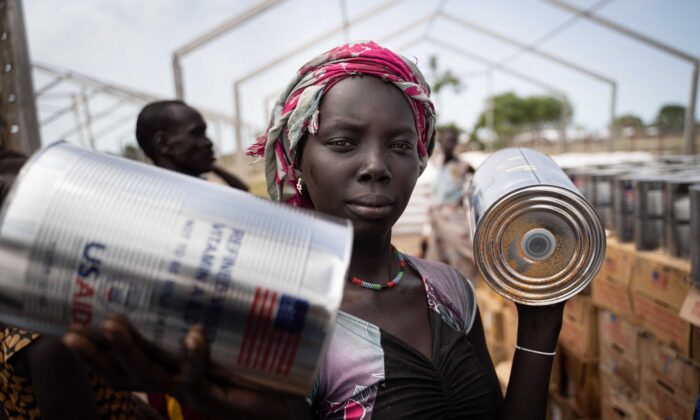 A woman from Murle ethnic group receives cans of oil during a food distribution by United Nations World Food Programme (WFP) in Gumuruk, South Sudan, on June 10, 2021, after her village was recently attacked by an armed youth group. (Simon Wohlfahrt/AFP via Getty Images)
Viewpoints

As COVID-19, violent conflicts, and natural disasters persist around the world, an increasing number of people face an additional crisis: food insecurity. Although food insecurity existed in many low- and middle-income countries prior to 2020, it is clear that the COVID-19 pandemic has escalated this global challenge.

Within the 79 countries in which the World Food Program operates, the number of people suffering from acute malnutrition or worse has doubled to 270 million people since 2019.

Food insecurity is caused by a number of factors, many of which were heightened during the COVID-19 pandemic.

The loss of income and rising food costs significantly contributed to an increase in world hunger. The United Nations International Labor Organization reported on Jan. 25, 2021, that 8.8 percent of global working hours, or the equivalent of 255 million full-time jobs, were lost in 2020. The working hour losses incurred in the first year of the pandemic were approximately four times higher than during the 2009 global financial crisis. As a result, according to World Bank estimates, as many as 124 million people fell below the international poverty line in 2020 and lived on less than $1.90 per day.

The combination of income losses and rising food costs have created “the most lethal” situation according to World Food Program chief economist Arif Husain. Depreciating currencies in countries still struggling from the fallout of the pandemic, rising demand in recovered countries, and increased supply chain costs have contributed to inflation in food costs.

According to the World Bank, since January 2020, the global price of food has increased by 40 percent, which the United Nations Food and Agriculture Organization reports is its highest point since September 2011. The prices of corn, wheat, and cereal have risen by 66 percent, 23 percent, and 45 percent, respectively.

Both the World Food Program and the Food and Agriculture Organization warn that 20 countries, including Yemen, South Sudan, and northern Nigeria, are on the brink of famine.

Children who are too young to attend school are also severely affected by malnutrition. The World Health Organization reported in April 2020 that, “47 million children under 5 years of age are wasted (low weight for height), 14.3 million are severely wasted and 144 million are stunted (low height for age).”

Unfortunately, future projections do not provide optimistic outlooks. The World Bank predicts that as many as 39 million additional people will live below the international poverty line in 2021. In total, this will result in 750 million people living in extreme poverty. Similarly, the International Labor Organization estimates that working hour losses will continue and that the losses will total between 1.3—4.6 percent of global working hours, or the equivalent of 36—130 million full-time jobs.

While food insecurity inevitably exacerbates health problems and suffering, lack of access to food also results in other challenges, such as political instability and mass migration. In February 2021, seven regions in Sudan declared states of emergency as rising food costs led to deadly protests.

Under the 1948 Universal Declaration of Human Rights, everyone has the right to a standard of living that is adequate for their health and well-being. Although suffering from food insecurity predated the pandemic, the impact of COVID-19 has heightened the urgency of responding to this devastating tragedy.

Combating food insecurity should be a priority for all governments and civil society. Together we can eradicate this global crisis.