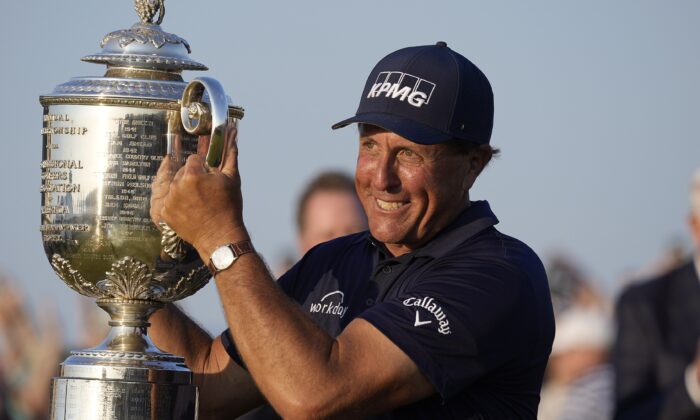 Column: Never No. 1, Mickelson’s Legacy Will Be Longevity

KIAWAH ISLAND, S.C.—Among the congratulations that poured in for Phil Mickelson becoming the oldest major champion in golf was a video tweet from Jack Nicklaus, who is still good at math.

“You know, something sort of strikes me that 50 years old is older than 46,” Nicklaus said with a grin. “Well done, my friend. Many more.”

Mickelson plays a game with which Nicklaus might not be familiar, even though the most iconic of his 18 majors was Nicklaus winning the Masters at age 46.

During an interview at the end of 2016, Nicklaus said that sixth green jacket “was an accident in many ways.” He started to scale back his schedule after winning two majors in 1980. He won twice more before the 1986 Masters, but he really wasn’t playing much golf.

“It’s really difficult when you’ve had as much success as I had over a long period of time to charge your batteries, day after day, and go back out and say, ‘Man, I want to do this again,’” Nicklaus said.

The list of 24 players who have reached No. 1 since the world ranking began in 1986 does not include Mickelson, who is more accomplished than all but one of them. He has never won a PGA Tour money title. He has never been PGA Tour player of the year. He is not among the most elite group in golf with the career Grand Slam.

Only one of those can change. And even in the glow of his two-shot victory at Kiawah Island to win the PGA Championship, adding the U.S. Open still seems like a long shot.

That would stand as his greatest major. It might even top Tiger Woods winning the Masters after overcoming four back surgeries that left him wondering if he could ever play again.

What won’t change regardless of what Lefty does next is his legacy of longevity. It doesn’t sound all that sensational. But it is.

Never mind Mickelson becoming the oldest player to win a major, breaking a record that had stood for 53 years.

Mickelson set another record Sunday as the first player in PGA Tour history to go 30 years between victories. He won his first when he was a junior at Arizona State. He won his 45th when his daughter was a senior at Brown.

“He’s been on tour as long as I’ve been alive,” Jon Rahm said. “For him to keep that willingness to play and compete and practice, even when it hasn’t been working, it’s truly admirable.”

From his first full season on the PGA Tour, Mickelson never finished lower than 60th on the money list. That was last year, at age 49, during a season disrupted by the pandemic.

He made the Tour Championship 19 of his first 20 full seasons, the exception in 2003 when his wife went through a scary and troublesome pregnancy that ended well with their third child.

As for team competitions, Mickelson played his first Presidents Cup in 1994 and was part of every U.S. team until the last one in 2019 at Royal Melbourne. He hasn’t missed a Ryder Cup since his 3-0 debut at Oak Hill in 1995.

Whether he’s at Whistling Straits in September is to be determined.

The last American to win a major and be left off the Ryder Cup team was Todd Hamilton, the British Open winner in 2004. The last American major winner left off any team was Keegan Bradley, who won the PGA Championship as a rookie in 2011. The final pick for the Presidents Cup went to Bill Haas, the FedEx Cup champion.

Neither was named Phil Mickelson.

Most remarkable about his longevity is that he kept working harder even as progress was difficult to see.

Mickelson had gone more than two years without winning—except for two times he played on the 50-and-over PGA Tour Champions—and nine months without finishing in the top 20. He fell out of the top 100 in the world in March. The last time he was outside the top 100 was August 1993, three weeks after Jordan Spieth was born.

And still he pressed on without any secret sauce except to keep trying.

“My desire to play is the same,” he said. “I’ve never been driven by exterior things. I’ve always been intrinsically motivated because I love to compete, I love playing the game. I love having opportunities to play against the best at the highest level. That’s what drives me, and the belief that I could still do it inspired me to work harder.

“I just didn’t see why it couldn’t be done,” he said. “It just took a little bit more effort.”

Winning is why he plays, and winning can be exhausting. That’s 48 victories worldwide to go along with 39 runner-up finishes and as much heartache as joy in some of the majors, particularly the U.S. Open.

Mickelson is still finding ways to get better.

The topic in that Nicklaus interview was Woods, who had just returned from 15 months off after a third of what would be four back surgeries. Nicklaus ended his thoughts on motivation by adding as aside, “Phil is not done yet, either.”

That was five years ago.