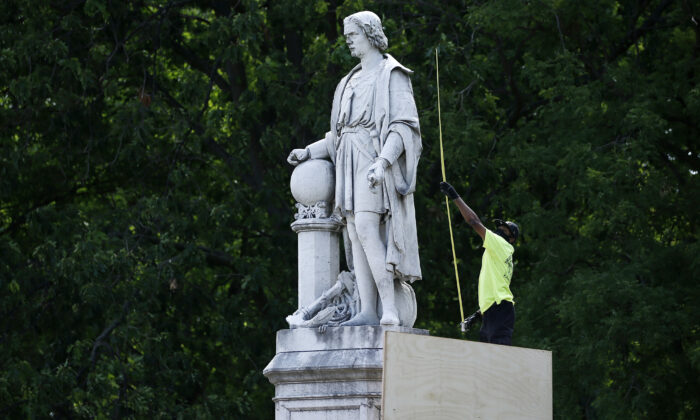 A city worker measures the statue of Christopher Columbus at Marconi Plaza as they build a cover in South Philadelphia on June 16, 2020. (Matt Slocum/AP Photo)
Viewpoints

Columbus Was a Hero, Not a Villain

Monday, Oct. 11, will mark the 50th Columbus Day in America since the first official federal holiday of that name in 1971. The explorer from Genoa, Italy, made landfall in the New World on Oct. 12, 1492, which was a Wednesday. But we Americans like three-day weekends, so we celebrate his achievement on the second Monday of October. In Central and South America and in the Caribbean, many nations will also take note of the great event next week.

Correction: Not all Americans will celebrate Columbus. Some will ignore or even vilify him. A few places have even struck him from the calendar altogether, substituting “Indigenous Peoples Day” to honor the locals who were allegedly victimized by the foreigner Columbus. It’s a kind of pompous, leftist virtue-signaling rooted in the myth of the “peaceful and noble natives.” One of its most notorious perpetrators was the Marxist pseudo-historian Howard Zinn, who has been thoroughly discredited by actual scholars such as Mary Grabar, author of “Debunking Howard Zinn” and “Debunking the 1619 Project.”

Extremists among Zinn’s disciples accentuate, exaggerate, and even fabricate the sins of Columbus but never speak of the ugly side of the natives of the region in the 15th century. On the very island where Columbus’s first landing occurred, which he called San Salvador, tribes were slaughtering each other right and left. The Tainos lived in terror of the ferocious Caribs, who rampaged, murdered, plundered, and enslaved on a regular basis. From the Aztecs to the Mayans to the Incas and most other tribes in the Americas at that time, ritual violence often took the form of brutal warfare and subjugation, child sacrifice, and even cannibalism.

Some of the Spanish conquistadors who came to the Americas over the next century were just as cruel as the worst indigenous brutes, but it’s utterly unfair to lump Columbus among them. Columbus executed some of his own crew for acts of cruelty toward the natives.

“It’s a sad twist of fate,” writes historian Jarrett Stepman in his authoritative book “The War on History,” “that Columbus now gets blamed for the very actions he tried to prevent. … Primitive societies are often a far cry from the ideal image of the noble savage famously conjured up” by armchair academic charlatans like Howard Zinn.

Some of those charlatans blame Columbus for inaugurating an influx of European explorers who brought devastating diseases with them, centuries before the world even knew of such things as viruses, bacteria, parasites, or sanitation. Diseases among the indigenous peoples were already epidemic and were the leading reasons why few lived beyond the age of 35.

What about the fact that Columbus set sail for Asia and not only never made it, but died in 1506 thinking that, in fact, he had? Can we fault him for not knowing when he headed west from Europe that there were two entire continents in the way (North and South America)? If we do, then we should question the wisdom of the many other fathers of accidental discoveries—from X-rays to quinine to corn flakes and Vaseline.

Christopher Columbus deserves admiration for many good reasons: Like the Apollo astronauts, he set out on a dangerous mission with no guarantee of success. He possessed extraordinary seamanship. At a time when how to calculate longitude was two and a half centuries into the future, he excelled at navigation via “dead reckoning.” He was a courageous pioneer, warts and all, whose story is inextricably tied up with the origins of American liberty.

Therein, I suspect, lies the real motive for denigrating Columbus. If your aim is to delegitimize American liberty or even Western Civilization in general, then Columbus must go, even if it requires lies to get the job done.

My recommendation is this: Celebrate Columbus and Columbus Day. Talk to your school-age sons and daughters about the great explorer and find out what they’re learning about him in school. If he’s portrayed as the hero he was, thank the teachers. If he’s painted as a villain, demand an end to the indoctrination and demand the restoration of truth and history.

Lawrence W. Reed
Follow
Lawrence Reed writes a weekly op-ed for El American. He is president emeritus of the Foundation for Economic Education (FEE) in Atlanta, Georgia; and is the author of “Real Heroes: Inspiring True Stories of Courage, Character, and Conviction“ and the best-seller “Was Jesus a Socialist?”