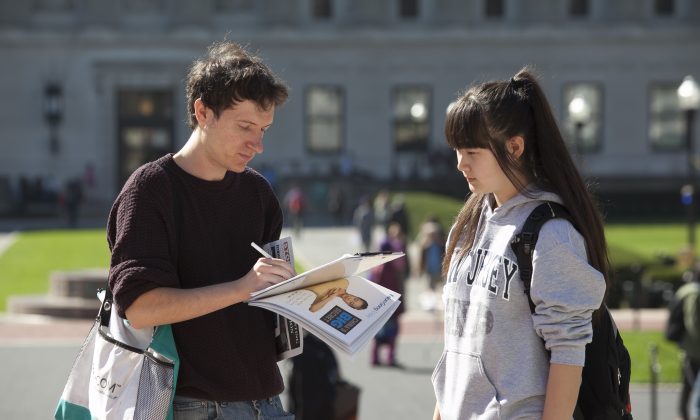 Volunteers of the Falun Dafa Club at the university collected signatures in support of House Resolution 281, introduced to the House of Committee on Foreign Affairs on June 27 by Rep. Ileana Ros-Lehtinen (R-Fla.). The resolution has 148 co-sponsors.

H.Res.281 calls on the Chinese regime to stop the live organ harvesting of Falun Gong practitioners, and stop persecuting the spiritual group the regime started to crack down on in 1999—the same year that the Falun Dafa Club was established at Columbia University.

Damon Noto, spokesman for the Doctors Against Forced Organ Harvesting organization, has been involved in bringing the issue to light ever since reports of forced organ harvesting sprung up in 2006.

“It would be a major step forward in terms of the U.S. government supporting the actions to end forced organ harvesting in China,” he said.

Noto said once the United States speaks out about the atrocities, countries around the world would follow suit.

Columbia University student, Kim Price, stood in front of the posters with blue leaflets in hand. She said she couldn’t believe the atrocities and said the campus was the perfect location for placing the banners and posters where students pass by all daylong.

“It will open and inform the minds of this next generation of individuals who might be able to manifest some change,” she said.

Price, 47, is getting a degree in urban studies. She said the peacefulness of the music playing around campus prompted her to pause and study the posters.

The tranquil sounds of Chinese instrumental music compositions titled “Jishi” and “Pudu” resonated through the speakers and echoed around campus.

“I hope that people will stop and read,” Price said.

Stephen Petro, a student going into his doctoral studies, said that human rights violations are always of concern to him. Petro recently published a book: “Rationality, Virtue, and Liberation: A Post-Dialectical Theory of Value.”

“This is obviously, just a flagrant violation of human rights, and the world community should be paying more attention to things like this,” he said, adding that the prime location in front of the Alma Mater statue is central to the campus.

“We should have more things like this every single day,” he said. He suggested that Columbia students should get out from behind their books and hold daily protests and marches to show that the university doesn’t stand for human rights violations.

Another student who was signing the petition was Edmund Bourke, who decided to study world history after a lifetime of practice as a kidney doctor.

Bourke’s daughter, Samantha Power, is the U.S. Ambassador to the United Nations specializing in Human Rights. Bourke said that after his daughter heard about the Tiananmen massacre, she decided to dedicate her life to exposing human rights abuses.

Bourke said he traveled to China four years ago and witnessed the Chinese plainclothes police who were spying on Falun Gong practitioners at Tiananmen Square.

“I thought it had improved, but it hasn’t improved,” he said. Bourke said he didn’t know about live organ harvesting from Falun Gong practitioners but that he had heard propaganda that lead him to think that those who were condemned to life in prison could sell their kidneys to get out.

Visitors can sign the petitions at Columbia University in front of the Low Memorial Library until Thursday, 5 p.m.