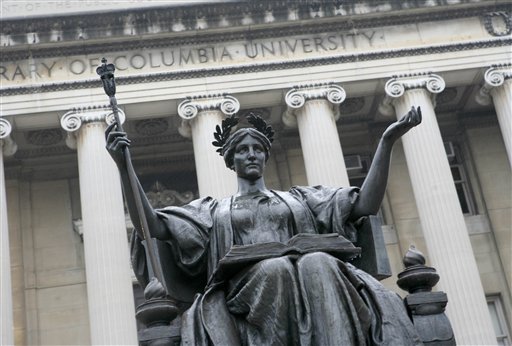 This Oct. 10, 2007 file photo, shows the statue of Alma Mater on the campus of Columbia University in New York.Columbia University ranked first among private not-for-profit four-year or above schools, according to the DOE’s report. (AP Photo/Diane Bondareff, File)
New York

NEW YORK—Columbia University has the highest tuition in the country, according to the federal government. The U.S. Department of Education’s (DOE) annual College Affordability and Transparency Center report examined public and private colleges and universities across the country and ranked them based on the cost of tuition and the net price of attendance.

Columbia University ranked first among private not-for-profit four-year or above schools, according to the DOE’s report. Columbia’s annual tuition of $45,290 outranked number two Sarah Lawrence at $45,212 and number three Vassar at $44,705 in the same category.

Both Sarah Lawrence and Vassar are located in New York State. All three cost about double the national average of $22,786 for schools in the same category.

Ranked schools included two- and four-year public and private schools and those that are not-for-profit and for-profit.

Throughout the country, the largest tuition increases were seen largely in southern states, with Texas leading the way. The Rabbinical College Bobover Yeshiva Bnei Zion in Brooklyn saw a 45 percent tuition increase from 2011-2012.

Touro College in Manhattan had an increase of 923 percent for its average net price between the 2008-2009 and 2010-2011 school years. The average net price is the cost for a full-time student to attend a school after subtracting the average amount of state, local, and federal, grants, as well as scholarship money from the cost of attendance.