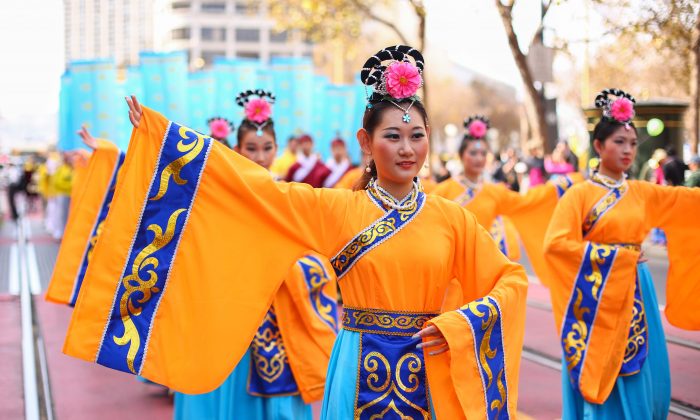 Over 5,000 practitioners and supporters of Falun Gong march in a parade in San Francisco on Oct. 22, 2016, bringing awareness to the practice and calling an end to the persecution in China that started on July 20, 1999. (Benjamin Chasteen/Epoch Times)
China

Late in the crisp, mostly cloudless morning of Oct. 22, thousands of people took part in a march meant to help end a bloody persecution taking place in China.

While the occasion was solemn, the march put on by practitioners of the spiritual practice of Falun Gong was bright and colorful. Led by a marching band in blue uniforms, the parade featured floats, practitioners clad in yellow or wearing traditional Chinese costumes, and a drum corps in bright yellow uniforms that brought up the rear.

Many of the participants had just finished meditating at the UN Plaza before getting into formation to start the parade at 11 a.m. They then made their way from the Plaza through the commercial districts and Chinatown.

Falun Gong was first taught in China about a quarter century ago, and is now practiced in 76 countries worldwide, plus Hong Kong, a Special Administrative Region of China, and Taiwan, which is independent of China but by treaty is considered part of one China.

Also known as Falun Dafa, Falun Gong incorporates five slow-moving qigong exercises with traditional spiritual teachings based on the principles of truthfulness, compassion, and tolerance. After its introduction to the Chinese public, Falun Gong became massively popular, with state estimates putting the number of adherents at 70 million in 1999. Falun Gong sources say the number was over 100 million, or one in 13 people in China.

The head of the Communist Party, however, became hostile towards the peaceful, apolitical group, a development that in July 1999 culminated in an all-out campaign to eradicate Falun Gong. Millions have been detained, and thousands of individual deaths in custody from torture and abuse have been verified.

More disturbingly, human rights investigators have come forth with evidence that the persecution of Falun Gong gave the Chinese regime a massive pool of living donors, to be killed on demand in a lucrative organ trade catering to both local and foreign customers.

The report “Bloody Harvest/The Slaughter: An Update,” released in June, estimates that 1.5 million transplantations whose most likely source was Falun Gong practitioners were done in the years 2000-2015. The report also concludes that in most cases transplanting one organ meant killing one donor.

Because of the total media blackout in China that obscures the scale of the ongoing persecution that Falun Gong practitioners face in China, public events like parades and rallies are crucial for raising awareness.

“It’s something I didn’t know about,” said retired doctor Richard Brooks, talking about the persecution. “I find it hard to understand why that would happen in the first place.”

Kathy and her husband Aaron Thompson were visiting San Francisco from Texas. “It’s very moving,” she said, saying that she had heard about Falun Gong before but didn’t know that the persecution was still continuing, or that they were victims of China’s organ harvesting industry.


“They’re showcasing their culture while raising awareness about the persecution,” her husband said. With regard to organ harvesting, he said “the first thing I was thinking about was Hitler and what he did to the Jews.”

According to a volunteer helping organize the event, 3,000 people were in the parade, while the police counted 5,000. A Falun Gong conference is scheduled for Oct. 24, and the parade is one of several events taking place prior.

Falun Gong is often spread by word of mouth.

“A parade like this is what made me start [practicing Falun Gong]” said participant Joe Knox.

“The most profound change is huge increase in tolerance,” Knox said about how practicing Falun Gong had changed him. “So if I’m driving on a freeway, for instance, and somebody cuts me off, before I might have gotten angry and now I don’t even think about it. So a lot of the things that would normally have bothered me years ago don’t even phase me at this point.”

Knox used to do a lot of athletic activities, like break dancing and surfing, and suffered a lot of injuries. The lingering effects of the injuries went away after he started to practice.

“It’s almost like I have a whole new youth to work with,” Knox said. “All my joints healed up really nice. Everything feels like I have a greater sense of energy.”

As an inner-city high school teacher, he often deals with children that face big challenges and also pose big challenges to him. The increase in tolerance he’s experienced after starting to practice helps him to better do his job. “I’m able to be a support for them,” he said.

“I really feel like a sense of moral obligation to be here and feel it is an honor to be here,” he said. “Since I benefited so much from the practice, I need to be here to make sure that people know about it, that people don’t get killed for practicing it, and people realize how good it is, because it has such a bad propaganda behind it from the Communist Party [of China].”

“It’s not just a Chinese thing. It’s a global thing, a human thing.”

Larry Ong and Petr Svab contributed to this report.