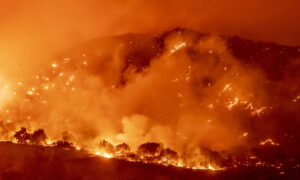 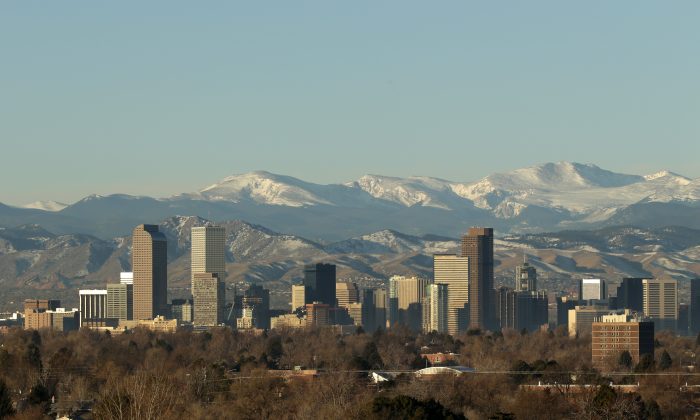 The Rocky Mountains rise beyond Denver skyline on Jan. 24, 2016. (AP Photo/Charlie Riedel)
US

DENVER—By 2030, Colorado’s population will grow from 5 million to 7 million people, thanks in part to a strong and diverse economy, the state’s famed Rocky Mountain quality of life, and its constitutionally-mandated low taxes.

And because of those voter-sanctioned tax limits, this fast-growing state could someday fall victim to its own success.

The contradiction is most evident when the rubber hits Colorado’s aging and underfunded roads. The state’s Democratic governor, John Hickenlooper, is trying to find ways to squeeze more revenue for roads from the budget, while Republicans don’t want to tamper with the fabled 1992 constitutional amendment known as TABOR that keeps a tight limit on those taxes.

That’s sparking a battle over the size of government in a perennial battleground state just as the presidential election gets into full swing.

“The budget battle here plays to people everywhere who don’t want politicians to decide for them the easiest way to get more revenue,” said Michael Fields, director of Americans for Prosperity Colorado, which has urged GOP lawmakers to sign a pledge to defend TABOR.

Liberals think that’s a recipe for disaster, especially in a growing state.

So far the low-tax crowd is winning. Even Hickenlooper acknowledges there isn’t a popular appetite to raise taxes, and his hopes of changing the classification of an arcane fee in the budget to free up revenue are opposed by Republicans who vow it won’t make it out of the State Senate, which they control.

“Voters are so angry at all forms of government and will vote it down,” Hickenlooper said recently of reclassifying the fee, which raised $750 million last year, in order to keep the budget from reaching a level that will trigger tax refunds under TABOR.

Republicans say the real problem is growing Medicaid spending. Colorado, which expanded the program under the Affordable Care Act, is spending about $2.5 billion on the health care plan for the needy. For critical road projects, GOP leaders proposed issuing $3.5 billion in bonds. The governor says there’s no revenue to pay back the debt from bonds.

Under TABOR, voters must approve any state and local tax hike. Democrats are still stung by a resounding defeat of a 2013 ballot initiative to raise $1 billion for schools.

But inspiring hope for some, residents in conservative Colorado Springs did approve a local sales tax hike to pay $250 million for road repairs.

The Colorado Contractors Association, whose members employ more than 40,000 people, has been sampling the public mood about ways to pay for roads, which it and other business chambers around the state say is a top voter concern. It’s preparing a list of options for state government and, possibly, for voters on the November ballot.

“People are starting to realize it’s more than a pocketbook issue,” said Tony Milo, the association’s executive director. “They’re willing to pay more as long as there are guarantees on spending and that it guarantees safety and mobility.”

All agree Colorado’s highway system, basically laid out in the 1950s, needs to be modernized.

Winter skiers and summer holiday campers can spend hours inching along steep mountain inclines at 11,000 feet, creating a sea of red lights on Interstate 70, Colorado’s gateway to the Rockies. Commute times from Denver to Fort Collins to the north, or to Colorado Springs to the south, can be double the usual 80-minute drives along Interstate 25.

In swaths of northern and southern Colorado, two-lane rural roads built in the Depression era are deteriorating under the load of agricultural tractor-trailers and oil and natural gas tankers.

The state Department of Transportation has a budget of $1.4 billion a year largely devoted to maintenance. It says it needs $46 billion in the next 25 years to accommodate growth but faces a $25 billion shortfall under current spending rules.

But Colorado voters haven’t increased the 22-cent-per-gallon state gasoline tax in more than 20 years, and politicians are reluctant to ask. It and the federal gas tax provide more than half CDOT’s revenue.

This year, CDOT could get another $200 million that’s available only in years when statewide personal income growth increases by 5 percent or more. But a bipartisan budget committee warned that amount can drop or disappear if state revenues in coming months prompt bigger tax refunds under TABOR. The panel called for guaranteed fixed installments.

“There are a million factors and political interests at work that have us paralyzed, and we’re all looking for alternatives,” said Colorado Springs Republican Sen. Kent Lambert, chair of the Joint Budget Committee.