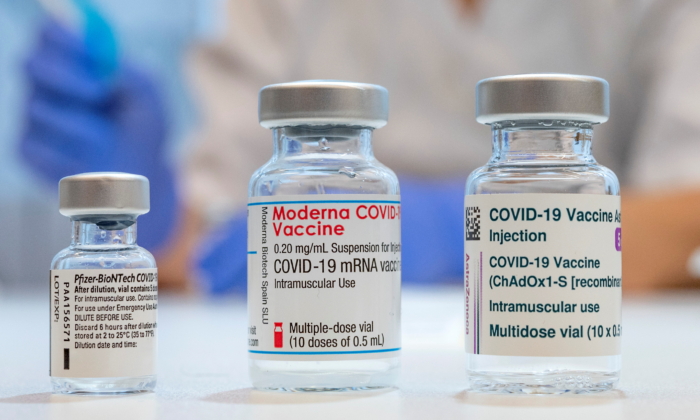 Used vials of the Pfizer-BioNTech, Moderna, and AstraZeneca coronavirus disease (COVID-19) vaccines are pictured at the Skane University Hospital vaccination centre in Malmo, Sweden, on Feb. 17, 2021. (Sweden Out via Reuters)
Education & Family

Colorado State University says it is not arresting students who are unvaccinated, but those that come onto university property without disclosing their vaccine status will be trespassing.

Claims that students have been threatened with arrest are “a misrepresentation of the university’s communication to students,” CSU said in a statement posted Oct. 11.

On Sept. 27, the university’s Student Conduct Services began sending out letters to 1,325 students who had not yet provided information about their vaccine status or claimed an exemption.

This represents about 5 percent of more than 27,000 students with on-campus classes or activities, according to CSU.

The university said more than 900 of the 1,325 students have responded to the message since it went out.

A Sept. 30 letter to one student, sent electronically, stated that non-compliant students on campus property were trespassing and could be cited, or arrested.

The letter said non-compliance “poses a threat to the safety and well-being of the university community.”

“Effective immediately, you are trespassed from all University property until May 14, 2022,” the letter said.

“This means you are not permitted to be on any university property or in any university buildings, this includes—but is not limited to—residence halls, university apartments, dining halls, in-person classes,” and other facilities on campus.

“If you are found on university property, or in any university building, you may be cited, or arrested, for trespassing and face further disciplinary action.”

The “quickest way” to have the order removed is by complying with the university vaccination and screening mandate, the letter added.

The letter was signed by Michael Katz, Director of the Student Resolution Center, on university letterhead.

An email to CSU spokeswoman DellRae Ciaravola seeking to confirm, or deny, the authenticity of the letter was not returned.

An email to Katz was not returned.

Instead, the university responded with a link to the official statement denying CSU was arresting students who are unvaccinated on campus.

The university said students were required to submit their vaccine status, or ask for an exemption, by Aug. 18.

After the deadline, non-compliant students received two personal emails alerting that their names would be submitted to Student Conduct Services.

“The message did not indicate that students were required to be vaccinated or they would face consequences; the university has consistently said that students or employees could declare an exemption and that has not changed,” CSU said.