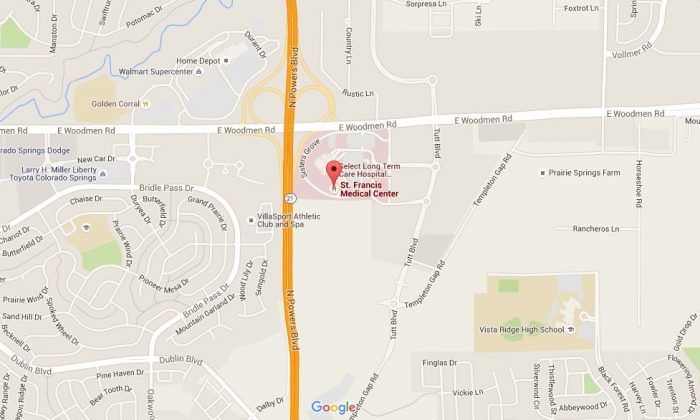 Penrose Hospital-St. Francis Medical Center is Colorado Springs, Colo., which is said to house victims of last week’s Planned Parenthood shooting rampage, has been placed on “lockdown.” (Google Maps)
US

#Breaking: Police in Colorado Springs confirm Penrose Hospital is on lockdown. We’ll tweet out more as we have it.

According to local station 9 News in Denver, police confirmed after 2 p.m. ET that the hospital was placed on lockdown.

The situation is developing, and it’s unclear what’s happening. It’s unclear if the lockdown has to do with the shooting last week.

The hospital is located at 2222 N. Nevada Ave. Nobody is being allowed inside or out of the building on, according to KRDO.

This is a breaking news update. There will be more information as the situation develops.

Last week, ER doctors at the hospital recounted the chaotic situation after the Planned Parenthood shooting.

“It was actually comforting to know that things were going well. And you can see around, when you looked around through the department, everybody was ready,” said Dr. Rick Pionkowski, who works at Penrose Hospital, told Fox 21.

On Friday, three people–including a police officer–were shot and killed at a Planned Parenthood clinic in Colorado Springs.

The suspect was identified as 57-year-old Robert Lewis Dear.

“This unconscionable attack was not only a crime against the Colorado Springs community, but a crime against women receiving healthcare services at Planned Parenthood, law enforcement seeking to protect and serve, and other innocent people,” U.S. Attorney General Loretta E. Lynch on Saturday said, reported NBC News.
Dear got involved in a five-hour-long standoff with police.

A former neighbor of Dear’s in South Carolina said of Dear, “He was really strange and out there, but I never thought he would do any harm.”