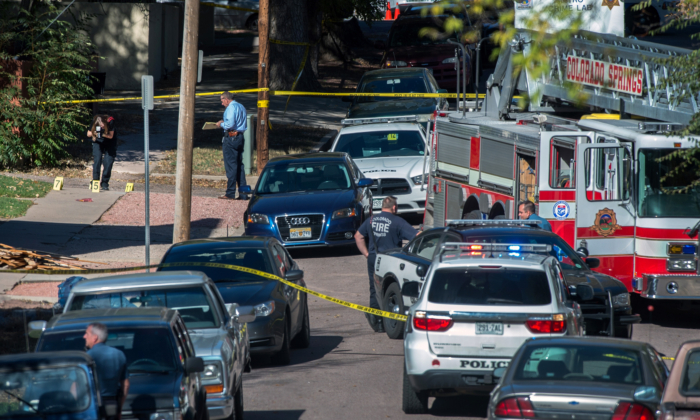 COLORADO SPRINGS, Colo.—The man who fatally shot three people during a rampage through the streets of Colorado Springs was a recovering alcoholic who posted an online video two days earlier expressing displeasure with his father for allegedly falling under the sway of a particular preacher—but gave no indication of the violence to come.

Authorities on Monday identified the gunman as 33-year-old Noah Jacob Harpham, who lived just steps from where his first victim was slain on Saturday.

Witnesses said Harpham had a rifle in one hand and a revolver in the other when he first killed a bicyclist. He then calmly walked less than a mile and fatally shot two women on the porch of a sobriety house. Harpham was then killed in a gunbattle with police.

A motive for the downtown shootings in broad daylight was unknown, and Harpham left few clues in blog posts and on social media.

His mother, Heather Kopp, a freelance writer living in New York, described his longtime struggle with addiction in “Sober mercies: How love caught up with a Christian Drunk,” a book also about her own battle with alcoholism.

Authorities have not said whether there was any link between his substance abuse problems and the fact that two of his victims were women who themselves were in addiction recovery.

Colorado Springs police released no new details about the shooting but identified the victims late Monday as Andrew Alan Myers, 35; Jennifer Michelle Vasquez, 42; and Christina Rose Baccus-Gallela, 34. The El Paso County sheriff’s office said four officers fired at Harpham but that they were not wearing body cameras, and their squad cars were not equipped with dashboard cameras.

A fuller picture of Harpham emerged in details from his mother’s book, in which she described him as “introverted and moody” and turned to drugs and alcohol around the time he gave up on college. Kopp said Harpham, who was living in Eugene, Oregon at the time, “struggled just to live and keep a job.” His family was so worried about him that they staged a “mini intervention,” but their efforts failed.

He completed a three-month program in California, but drank on his first night out, Kopp said.

“Noah loved and hated all of us in equal measure,” she wrote. “In Noah’s mind, he was the loser child, the burnt piece of toast in the bunch.”

During a visit to his family’s Colorado Springs home years ago, he drank too much, became angry and “exploded,” Kopp said. His mood had become “so toxic it was scary.”

His mother and stepfather urged Harpham to move in with them. In Colorado Springs, she said, he found work as an insurance agent and met with an Alcoholics Anonymous sponsor regularly.

His mother wrote that he seemed to improve under their roof and eventually moved into his own place. She said he began helping other addicts.

In a YouTube video posted Thursday, Harpham questioned what he called his father’s involvement with the Rev. Bill Johnson and the Bethel Church in Redding, California. The church is part of a stream of Pentecostalism that heavily emphasizes signs of God’s miracles and revelations in modern-day life, along with supernatural healing. Johnson and his church have come under criticism from conservative Christians who say Johnson promotes teachings far beyond the boundaries of mainstream Christianity.

Efforts to reach Harpham’s father, Thomas, and officials with the Bethel Church by telephone on Monday weren’t immediately successful.

Kopp and other relatives did not return messages seeking comment. Benjamin Broadbent, lead minister of the First Congregational Church of Colorado Springs, released a statement he said was provided by Harpham’s family, saying they were shocked and saddened and requesting privacy.

Harpham first shot Vasquez, who was sitting outside the house, causing Galella to open the front door to see what was going on, said Galella’s uncle, Chris Bowman.

The white picket fence in front of the house was riddled with bullet holes on Monday.

Neighbor Teresa Willingham said the third victim, Myers, was a bicyclist who begged for his life as the gunman continued to fire.