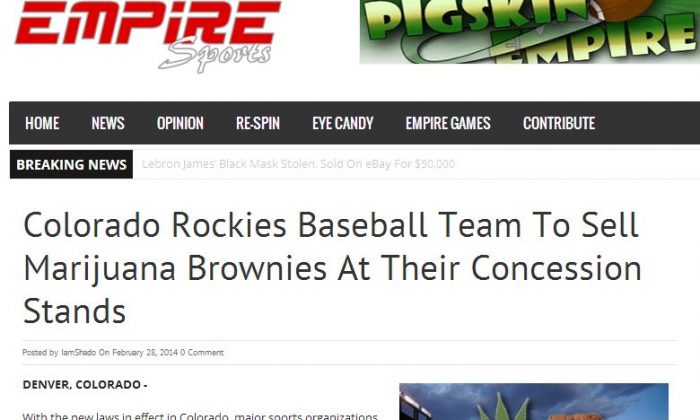 The Colorado Rockies will not be selling marijuana brownies at games. (Screenshot / Empire Sports)
Social Media

An article published on a satire news site says that that the Colorado Rockies will sell pot brownies at games, and it’s not true.

The article was published by fake sports news site Empire Sports. The website only publishes hoax news stories, even though it doesn’t have a disclaimer.

“With the new laws in effect in Colorado, major sports organizations are looking for ways to cash in on the newest legal cash crop in the state. Sources are reporting that Major League Baseball’s Colorado Rockies plan to sell food items which contain marijuana at concession stands during games next season. The first item on the list? Pot Brownies,” the fake article reads.

There’s no national or local media coverage of marijuana brownies being sold at Colorado Rockies games.

Empire Sports has other fake stories including, “Lebron James To Sign With Dallas Cowboys and Leave NBA After Season Ends” and “Former NFL Star Aaron Hernandez Escapes Prison And Breaks In To Tom Brady’s Home.” Neither articles have any shred of truth to them.

“Hey I’m all for recreational use… But the eating thing isn’t safe to drive afterwards…let’s be responciple and not lose the new privilege,” one person wrote on Facebook.

Another wrote, “Lol snacks at stadiums are so expensive anyway imagine how much one of those would cost.”