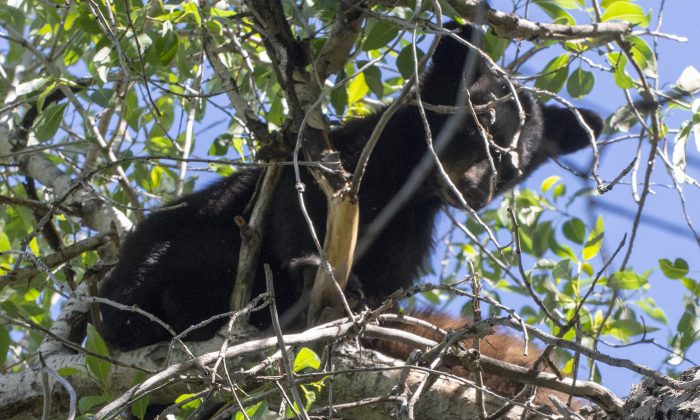 One of the surviving sow bear cubs found 25 miles south of Denver, Co., on June 27. (Colorado Parks and Wildlife)
US News

A person acted lawfully when killing a bear to stop it from entering a family home on June 27, Colorado authorities have confirmed.

A Castle Pines resident did not break the law when using lethal force to stop a sow bear from entering the family home.

Colorado Parks and Wildlife (CPW) confirmed the bear was accompanied by three cubs and the resident feared the largest animal was trying to enter the home at about 1 a.m. local time. The shooter reported the killing to CPW shortly after the incident.

“Under state statute, it is lawful for a person to use lethal force to protect their personal safety when they feel threatened by a bear,” CPW said in a statement. “Any such killing of a bear that falls under that statute must be reported within five days, which lawfully occurred in this case.”

While wildlife officers regretted the death of the mother bear and cubs who now have no parent to look after them, they admitted there was nothing illegal about the circumstances.

“This is an unfortunate occurrence, and you never want to hear of a sow getting killed and cubs being orphaned,” CPW Northeast Region Manager Mark Leslie said. “Review of the events in this case did not reveal any statutory violation with regards to the killing of the sow.”

Black bears are a native species in Colorado and are in good habitat across the Front Range according to CPW.

“We have a lot of people living in good bear habitat now, and Castle Pines is one of many examples of that,” Leslie said. “Anywhere along the Front Range provides good bear habitat because they have everything they need to survive—food, shelter, and water.”

However, garbage, bird feeders, pet food and the smell of barbecue grills can lure bears to neighborhoods. CPW said this can be easily avoided by removing these food sources.

“If you are putting your trash out the night before collection, or if you have a bird feeder out this time of year, you are harming the well-being of our bears,” Leslie said. “That leads to human-bear conflicts that can escalate into dangerous and sad situations like we are seeing here in Castle Pines.”

Wildlife officers performed a necropsy and captured two of the three cubs on June 28. The cubs have been transported to the Frisco Creek wildlife rehabilitation facility operated by CPW near Del Norte, 219 miles southwest of Denver.

The surviving cubs will be raised in conditions that closely mimic real wildlife conditions to increase the chance they will be able to survive after being released in the wild.

“Bears live in a secure enclosure with other bears which helps them to develop physically and socially,” CPW said. “The bears are also fed in a way that imitates life in the woods. During summer and fall in the wild, food is abundant and bears eat almost constantly in order to put on the fat they need to get them through the winter.”

The food supply later declines in winter to encourage bears to begin hibernating.

“The quantity of food the cubs will be given is cut back and eventually cut off,” CPW said. “In early January, the cubs settle into hibernation in the metal containers their enclosures have for shelter; it is where the cubs sleep and hide during the summer months.”