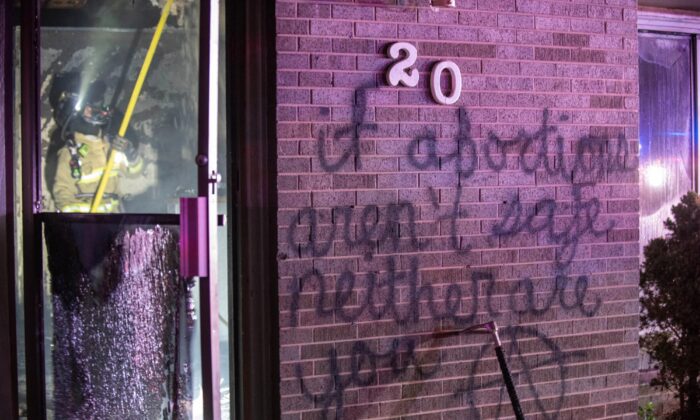 A message written on the wall of a Christian pregnancy resource center that was set on fire in Longmont, Colo., on June 25, 2022. (Longmont Police Department)
Crime and Incidents

Authorities in Longmont, Colorado, are investigating a fire at a pregnancy center reported in the early morning hours of June 25 as a potential arson case.

The fire at Life Choices, a Christian pregnancy center that offers free services related to sexual health and pregnancy, was reported at 3:17 a.m. local time on June 25, according to a news release by the Longmont Public Safety Department. The building sustained heavy fire and smoke damage.

The front of the property was also vandalized with black paint.

“If abortions aren’t safe, neither are you,” stated a message spray painted at the entrance. Another message on the ground read, “bans off our bodies.”

The police have asked residents who live near the center to check their surveillance video for any activity between 2:45 a.m. and 3:30 a.m., and to upload suspicious videos to the Longmont Police Services.

In a June 26 Facebook post, Life Choices announced that the center is temporarily closed. “The insurance and FBI investigations are still in process and need to be finished before we begin cleaning up and moving forward,” the group said in a comment on the post.

Radical pro-abortion groups are reportedly using the Crisis Pregnancy Center Map, an online interactive map developed by two professors from the University of Georgia, to plan their attacks on pregnancy resource centers. Several such centers have been vandalized and set on fire in recent weeks after a draft of the Supreme Court’s decision to overturn Roe v. Wade was leaked to the public.

The official decision was released June 24.

“A map of anti-abortion fake clinics, including dozens around the Twin Cities area … you know, just because information is power,” left-wing anti-police group Twin Cities Encampment Responders said in a June 24 tweet, which also contained a link to the map.

Colorado’s Democratic Gov. Jarod Polis has criticized the Supreme Court decision, stating on June 24 that his state will not “retreat to an archaic era where the powerful few controlled the freedoms over our bodies and health decisions.”

As the Democratic Party rules the legislature, people of the state “don’t have to worry” because their rights are “still protected,” Polis claimed. “In Colorado, we will continue to choose freedom and we stand against government control over our bodies.”

Back in April, Polis signed into law the Reproductive Health Equality Act, which codified abortion access in state law and explicitly withheld any rights or protections from a fetus, embryo, or fertilized egg.

With abortion clinics in much of the Midwest expected to shutdown soon, the law sets the stage for Colorado to become an abortion haven in the region.

In its majority opinion overturning Roe v. Wade, the Supreme Court noted that the U.S. Constitution “makes no reference to abortion” and that such a right is not “implicitly protected” by any constitutional provision.

Meanwhile, the U.S. Department of Homeland Security has warned that state officials and judges are at risk of political violence due to the Supreme Court decision.