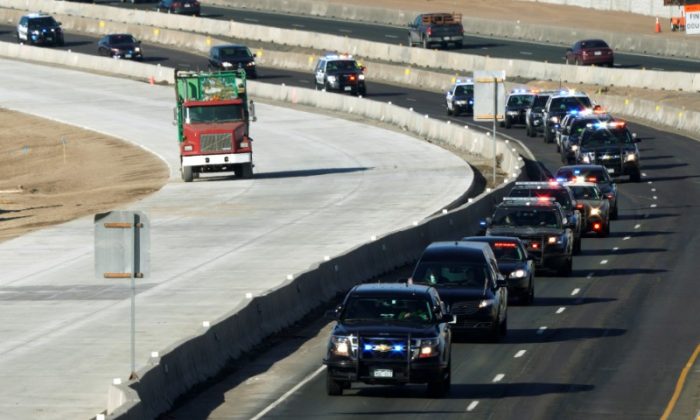 A procession of police vehicles escorts the hearse carrying the body of a deputy killed in a domestic disturbance where multiple deputies and civilians were shot in Highlands Ranch, Colorado, on Dec. 31, 2017. (REUTERS/Rick Wilking)
US News

Officials in suburban Denver are now investigating why a 37-year-old man fired more than 100 rounds at sheriff’s deputies on Sunday, killing one and wounding four others.

Matthew Riehl was identified as the suspect in the case. A YouTube user with the name Matthew Riehl posted a YouTube video on Dec. 13, saying that he wanted to replace Douglas County Sheriff Tony Spurlock, CBS News reported, adding that he criticized the sheriff and officers in profane terms.

Riehl was an Army veteran who served briefly in Iraq, according to Fox 31 Denver. In the video, he’s seen wearing an Iraq combat hat. “You know who’s going flub big time next election, Spurlock,” Riehl said in a video called, “Fire Sheriff Spurlock.”

Riehl was killed in the incident, according to the Douglas County coroner.

Officials left the home in response to a “verbal disturbance” involving two people, the sheriff’s office stated. The suspect, according to officials, “was acting bizarre and might be having a mental breakdown,” the report said. The officers left the scene because no crime was committed, Reuters reported.

Deputies were called back, and a man gave them a key to enter the home and left again before shots were fired.

“The suspect was just making a ton of noise and annoying everyone around him,” Douglas County Sheriff Tony Spurlock said. The suspect then opened fire “very, very quickly,” and deputies were shot after they tried talking to the suspect, who was inside a bedroom, the sheriff said.

It was not immediately clear why the incident had escalated, Spurlock said, Reuters reported. He described it as an “ambush-type” attack.

“They all went down almost within seconds of each other, so it was more of an ambush-type of attack on our officers,” Spurlock said. “He knew we were coming and we obviously let him know that we were there.”

Deputy Zackari Parrish, 29, was killed in the shooting. Parrish, who was married with two young children, had joined the force seven months earlier, Reuters reported.

“When he was shot and went down, the other officers went down right around him and they tried to pull him out, but were unable to because of their injuries,” Spurlock said.

At about 7 a.m., a SWAT team entered the apartment and more shots were exchanged. Riehl was killed and a fourth officer was wounded.

All told, Riehl fired more than 100 rounds before he was shot by police.

The injured officers were identified as Mike Doyle, 28; Taylor Davis, 30; Jeffrey Pelle, 32, and Tom O‘Donnell, 31. They were taken to the hospital in stable condition.

Pelle, who had emergency surgery, is the son of Boulder County Sheriff Joe Pelle, according to an online statement from the family.

The identities of the two injured civilians were not immediately disclosed, but Spurlock said he believed they are residents from other apartments. Their injuries were not life-threatening, he said.

The housing complex in an affluent suburban community near Littleton is described on its website as “one of the friendliest apartments” in the area.