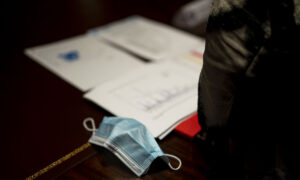 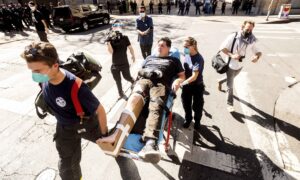 A mother of four who was trying to help a homeless man was stabbed to death.

Terry Dunford, the homeless man, was arrested and charged with one count of murder in the first degree, according to the Denver district attorney.

Her ex-husband called police after she failed to pick up her children for a Denver Nuggets basketball game almost a week later.

Denver police officers found Leslie in her bathroom, dead with multiple stab wounds, as well as clothes belonging to Dunford with blood on them.

The last time Leslie’s mobile phone was used was when she was at a liquor store on Feb. 7.

Surveillance video from the store showed them together at the store.

Dunford’s family members told 9News that he has mental illness and is bipolar.

The members also told 9News that he has abused multiple substances in the past.

In an online résumé, Dunford said he served in the U.S. Navy.

CBS reported that Leslie was allowing Dunford and another homeless man to live at her place to help them get back on their feet.

“That just speaks volumes of who she was,” said Antonio Grant, a neighbor. “A beautiful soul. Really nice lady.”

Police officers still aren’t sure how Leslie and Dunford met, however, although her oldest daughter told KDVR that she “made friends with everyone.”

“She was a very open person,” said Brittany Leslie.

She said her mother probably ran into him outside her apartment building or at the 16th Street Mall in the past couple of weeks.

She said the killing may have come after her mother told Dunford he couldn’t live at the apartment, though it’s not clear whether or not he was at the time of the murder.