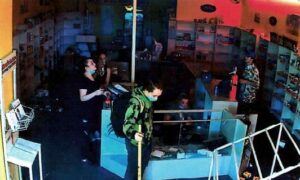 3 Charged in Arson at Minnesota Store During Rioting
0 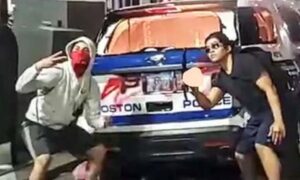 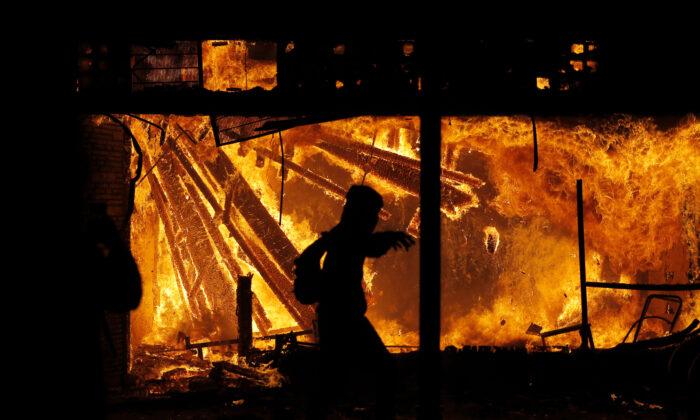 A person is seen in front of the burning Third Precinct of the Minneapolis Police Department in Minn., on May 28, 2020. (Julio Cortez/AP Photo)
Crime and Incidents

A Colorado man appeared in court Tuesday after being arrested and charged with aiding and abetting the arson of a Minneapolis Police Department precinct during riots last month.

Footage from surveillance cameras, Facebook, and Dylan Shakespeare Robinson’s own Snapchat account appeared to show him involved in setting the fire, according to a criminal complaint (pdf).

At one point, a person who looks like Robinson appears to light a Molotov cocktail-like device held by someone else, who then threw it at the Third Precinct building. Robinson later allegedly threw another incendiary device at the building, authorities said.

During the video shared on Snapchat, an unidentified female voice can be heard saying, “Dylan.”

The user behind the account typed several comments, including, “These guys have never made a Molotov… Rookies,” and, “We need gasoline.”

Another video posted on Facebook shows an individual authorities identified as Robinson inside the precinct setting a fire.

After investigators released information on the probe, including pictures of several suspects, a woman emailed them on June 10 and identified one of the suspects as Robinson, explaining that he had gone to school with her son.

The woman gave investigators the name of Robinson’s Facebook account and said he recently removed pictures from it. She said she hoped they found Robinson because he “also did AutoZone.” An AutoZone located across the street from the precinct was burned down on May 27.

Robinson was on probation at the time of his arrest. He was convicted previously of possession of drugs. The probation officer said Robinson was known to carry around a skateboard. The suspect was carrying a skateboard in the videos from the night of the fire.

A search warrant showed Robinson’s cellphone was in the vicinity of the police precinct late May 28 into the early hours of May 29.

Robinson was arrested in Breckenridge, Colorado, on June 14.

A 23-year-old St. Paul, Minnesota, man was arrested earlier this month for allegedly being involved in torching the police precinct.

Branden Michael Wolfe identified himself as a shirtless individual in several photographs captured by witnesses at the scene.

Law enforcement officers found items belonging to the Minneapolis Police Department at Wolfe’s apartment, including a riot helmet, a police radio, and a 9 mm pistol magazine.

Investigators also found evidence leading to the arrest of three teenagers in the arson of a health and nutrition store in St. Paul.

Images released last week showed suspects engaging in arson in a slew of places in the Twin Cities, including a charter school, an AutoZone, an Aldi, and a Wells Fargo.

One set of images authorities released showed a man they now say is Robinson.